Writing crime and thriller stories, the American novelist Karin Slaughter has been a mainstay of the mystery fiction scene for quite some time now. A bestselling author, she has been published in over thirty-seven languages worldwide, selling 35 million copies and gaining a huge international following. Creating a brand as a thriller writer known for her use of suspense and tension, she really understands how to keep the reader on edge. It’s the characters as well that also resonate, with them becoming iconic for many of her readers, as they’re well drawn and easy to relate to.

Her first book would be Blindsighted, which would be released in 2001 to huge success, with it also being the first in the ‘Grant County’ series of novels. Over the following years she would write six novels in the series, with the final one, Beyond Reach, being written in 2007. They’d feature her fictional town of Heartsdale in Georgia, and would come to shape other characters and series to follow, such as her ‘Will Trent‘ series, which would start with Triptych in 2006. These two series of hers would crossover, with special agent Will Trent of the Atlanta Georgia Bureau turning up in Grant County to work on cases. Largely writing mysteries, her stories feature problems to be solved, as the reader is continually kept guessing throughout.

More recently she has had her work commissioned to be adapted for television, with Netflix producing a series based on her 2018 novel Pieces of Her. The show is set to be produced and directed by Charlotte Stoudt and Lesli Linka Glatter, with it being the first series of Slaughter’s to be adapted, along with The Good Daughter, 2017, and Cop Town, 2014. Winning numerous awards for her work too, including an Edgar Award, she’s not without critical acclaim either, as she has many notable highlights throughout her career.

My own personal top five novels of hers are as follows: 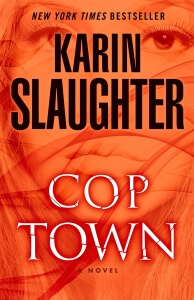 Set in Atlanta in 1974, this sees Kate Murphy in her first day on the job, looking to work her way up through the ranks of the male dominated police force. Accompanied by her partner Maggie Lawson, the two of them hope to make a difference, despite what others think of them, including Maggie’s brother and uncle. That’s when they learn there’s a cop killer on the loose, as the two of them are left out of the investigation, leaving them to discover their own way, journeying into the darkened heart of the city to find the murderer on their own.

With this story taking place in a different time and decade, it’s an interesting portrayal of the era and the attitudes back then. As a story of two individuals attempting to stand up against these institutions, it’s also empowering, with strong characters to root for throughout. The mystery itself is well paced too, keeping the reader guessing and on the edge-of-their-seat, constantly turning the page for more. 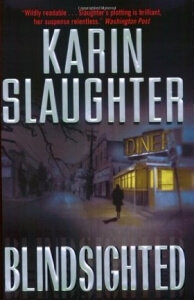 After discovering the body of a young college professor mutilated brutally in a local diner, a small-town in Georgia falls into blind panic. Conducting the autopsy, Sara Linton starts to learn the horrifying truth of the case, and just how bad it really is, as her ex-husband, and now police chief Jeffrey Tolliver leads the investigation. Then, just a few days later, another woman is found crucified, and her sister the detective Lena Adams wants to find the serial-killer and bring them to justice.

As the first of the Grant County series of novels, this does a great job of establishing the premise and tone of the series. Not shying away from some of the darker, more gritty elements of the thriller genre, Karin Slaughter really excels in creating high-stakes drama and tension. Immersing the reader in the world of her characters, it establishes a set-up that would continue to evolve much of Slaughter’s work to come. 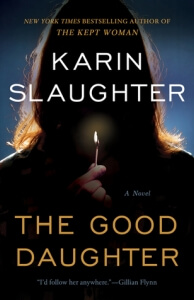 Twenty-eight years prior there was an attack on a family home that left the survivors devastated, with the mother being tragically killed. Following in the footsteps of her father, Charlotte Quinn has now become a lawyer too, making herself the ideal good daughter. That’s when violence strikes again, as the town of Pikeville experiences another shocking ordeal, meaning Charlotte must return to her past and find out the truth about what really happened on that fateful night.

This is a great thriller filled with all the twists and turns you’d want, but never expect, with Slaughter’s expert use of misdirection. Knowing exactly where she’s leading the reader, it’s a finely crafted novel that exudes confidence on each and every page. She also knows how to build character and drama, something which she excels at here, bringing the audience along for the ride as they’re fully invested in her characters. 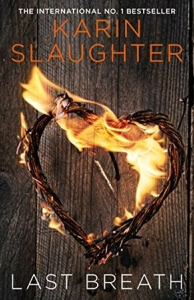 Ever since the night when she was just thirteen, Charlotte Quinn has been dealing with the brutal fallout of two men entering her family home with a grudge against her father. That’s when the teenage honour-student Flora Faulkner turns up, herself without a mother, and asks Charlotte for legal help. As a defence lawyer, she feels obliged to help those desperately in need, leading to her taking the case, wherever it may lead her.

Acting as the prequel to ‘The Good Daughter’, this is an excellent thriller in its own right, coming out not long after the first. It’s competent novella that really dives into the character of Charlotte Quinn, looking at what steps she’ll take professionally, and what lines she’ll cross to do her job. A fascinating mystery lies at the heart of it too, one that’s definitely an exciting inclusion into the Good Daughter series itself. 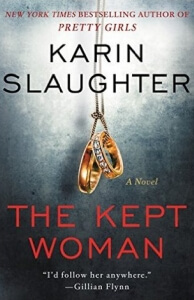 Following the brutal murder of an ex-cop, a case is assigned to special agent Will Trent after the medical examiner and his lover Sara Linton discovers the blood loss from the victim is someone else’s. There were footprints leading away from the crime-scene too, which means there is someone who knows the truth about what’s going on. Learning it’s a woman, they must locate and help her, as she may die soon herself if not found, all whilst looking to bring the main killer to justice before they strike again.

The eighth book in the Will Trent series, this not only provides an excellent mystery thriller, but also offers some great world-building too. Summing up what makes Slaughter’s work so compelling, it’s a highly addictive read that takes the thriller genre up a level. For anybody wanting to know why she’s so successful as an author, then they definitely can’t go wrong with this novel, with it’s tightly packed story that is thrilling to the every end.

Best Authors To Read If You Like Karin Slaughter:

Patricia Cornwell: Largely known for her Kay Scarpetta series of novels, American author Patricia Cornwell is well regarded for her dark and atmospheric thriller novels. Focusing on the world of crime, she takes a dive into the seedy underbelly of the criminal underworld, being a figure who’s very much at the forefront of the scene. Selling over 100 million copies of her novels, her work as heavily influenced police shows, as she has also featured as an authority in documentaries and on television.

David Baldacci: An American thriller novelist perhaps best known for both his ‘Will Robie‘ and ‘Camel Club’ series, David Baldacci is esteemed for his exciting and action packed stories. Publishing over thirty-nine novels and counting, he’s reached a worldwide audience with his work, garnering both critical and commercial success. He’s also seen his work adapted for the big-screen too, with his debut ‘Absolute Power’ being directed by and starring Clint Eastwood in the lead-role.

Tana French: The American-Irish writer Tana French has been making considerable waves within the thriller genre and throughout the industry recently. Her taut and intelligent mystery thrillers are extremely well paced, with her own personal slant on crime fiction, setting much of it in Ireland where she now lives. She’s had her work adapted for television too, as her ‘Dublin Murder Squad‘ series would be made into the eight-part BBC show ‘Dublin Murders’.

Michael Connelly: Extremely well known, Michael Connelly has proven himself to be a master of craft, writing strong characters with his tough and gritty thrillers. Placing a noir style surface over the top, he turns the conventions of the genre on their head, making for stories that are entirely unique and different. Creating his signature protagonist of Harry Bosch, the series has been adapted into the LA police-procedural show ‘Bosch’ for Amazon Prime.

Tess Gerritsen: The American thriller novelist Tess Gerritsen has been writing mysteries for many years now, with her masterful use of suspense and tension. Previously working as a physician prior to becoming a writer, she has put some of her own experience into her work, creating a number of medical thrillers too. A highly versatile writer, she has also created romantic thrillers, all with her own idiosyncratic take upon the genre.

Southern Fried True Crime – Karin Slaughter: Focusing on the true-crime genre, this interview examines Slaughter’s relationship with the genre. Speaking about her craft and her place as an author writing about southern characters, it looks at her inspirations and the research that goes into her work.

Harper Audio Presents – Karin Slaughter: Speaking about her own life, Karin looks at how she came to be a writer and what’s inspired her. This is more of a general interview looking at the crime genre overall, providing her general thoughts and feelings on it.

Writer’s Routine – Karin Slaughter: This looks at the creative process of Karin Slaughter as a writer in a fun and informative manner. Paying close attention to her daily routine, it discovers how she goes about writing her novels.