Casinos and gambling are an area of endless fascination. Whenever you think you have the bets or the games figured out, they change the questions. It’s something that feels so within reach, but at the same time completely out of reach.

There is so much about this world that is unknown to the common observer and there is always so much to learn. There have been great books written over the years about casinos, gambling, Las Vegas, poker, and the world of games. Books like The Theory of Poker are great for learning how to play the games, but what if you’re looking to learn a bit more about how things really go on?

That’s what this list is for. Below you will find five books that taught me a lot about the world of casinos and gambling. These are easy to recommend books for anyone because they’re just that good, but for the person interested in this world? They are a must-read. 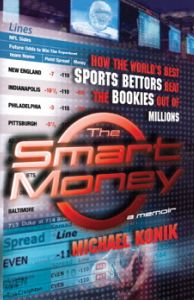 See at AmazonThe Smart Money: How the World’s Best Sports Bettors Beat the Bookies Out of Millions by Michael Konik

This book takes us into the world of high-stakes betting as Michael Konik gets himself ingratiated with Rick “Big Daddy” Matthews. Prior to their meeting, the largest bet Konik had ever placed was $200. By the time this book is over, that number will feel like pennies.

Matthews had a reputation as the world’s smartest sports bettor and was the mastermind behind a group known as the Brain Trust. The group of gamblers that was feared by the casinos for their ability to beat the Vegas line. The man was brilliant, but also had a reputation as a conniver and a snake who would do whatever it takes to gain an edge. When Konik meets him he is asked if he’d like to make some money during the football season. It was a proposition that Matthews couldn’t refuse.

The author becomes an operative of the Brain Trust and becomes rich in the process. This book shows how they beat the lines in Vegas and internationally as well as the excesses, betrayals, and paranoia that came with the lifestyle. 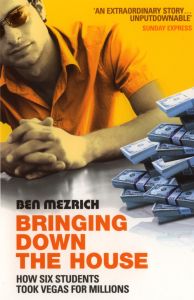 See at AmazonBringing Down the House: The Inside Story of Six M.I.T. Students Who Took Vegas for Millions by Ben Mezrich

By now you may be familiar with the story of the M.I.T. students who beat Las Vegas. It was even made into a film, 2008’s 21 starring Kate Bosworth, Jim Sturgess, and Josh Gad. Even if you know the story, you don’t really know the story until you read Ben Mezrich’s outstanding book.

The best and brightest of M.I.T.’s math and engineering students are taken in by a teacher with the goal of beating Vegas. The kids are taught how to count cards and are quite good at it thanks to their expertise in numbers and mathematics. They develop a system and take their talents to Las Vegas and within a couple of years they have taken down millions of dollars from the casinos.

Losing money is not something that the casinos typically enjoy though and the group quickly brings the heat on them from the seedy underworld of corporate Vegas. 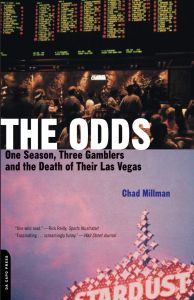 See at AmazonThe Odds: One Season, Three Gamblers And The Death Of Their Las Vegas by Chad Millman

Chad Millman followed three professional gamblers, from small-time to big time to the house itself, through a college basketball season in Las Vegas.

One gambler has an Ivy League degree but is also a former cokehead. Another is a college dropout who is doing his best to make a living at the only thing he ever enjoyed about college life. The third is one of the city’s most respected bookmakers who is on the verge of burnout.

In addition to the story of these three gamblers, Millman’s story provides interesting information on how betting lines are made, the effect and purpose of moving the line, the impact of internet betting, and Congress’ interest in abolishing betting on college sports as well as the changing face of Las Vegas from a lawless city to a family-friendly destination. 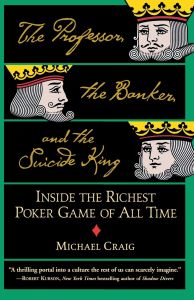 See at AmazonThe Professor, the Banker, and the Suicide King: Inside the Richest Poker Game of All Time by Michael Craig

It all began when a rich stranger from Texas came to the high-stakes poker room at the Bellagio casino to challenge some of the world’s greatest poker players to heads-up matches. The games that they played would become the richest poker game ever played.

Andy Beal would play for heads-up poker with each player having a million dollars at the start. Bets would bet in the $10,000 to $20,000 range, but it turned out that this was only the beginning. Soon, there would be more than $20 million dollars on the table as Beal sought to take down the biggest poker players in the world.

Craig’s book is an inside look at the Big Game as he tells a tale featuring vivid characters, insane wealth, and human drama. It’s a story like no other in the history of gambling. 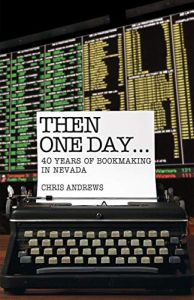 If you want to learn more about gambling, you have to go straight to the horse’s mouth. In this case, I’m talking about a Las Vegas bookmaker named Chris Andrews.

Andrews started booking sports bets in fifth grade and would take to Las Vegas right out of college. By the age of 25, Chris became the youngest sports book director in the business. He made a quick mark on the industry as he invented bets like the pleaser and 10-point teaser card, things that are still used to this day. He also started taking Super Bowl-style prop bets for Monday Night Football games which also proved successful. Chris served as an early influence on Roxy Roxborough, Las Vegas’ most influential oddsmaker, as he gave him his first job.

This book takes you into the mind of a bookmaker like no other.