If you’re looking for your next science fiction read, you’ve come to the right place. 2021 was an incredible year in the world of science fiction filled with great characters, amazing worlds, and unforgettable stories. The imagination of these authors was on full display this year and lead to some great reads.

Whether you are looking for a book about the effects of technology on our lives, stories set in deep space, or deep into the future; this list has a little something for all kinds of science fiction fans.

Keep on reading to see our list of the best science fiction books published in 2021. 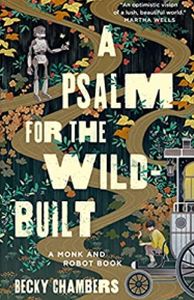 See at Amazon#5: A Psalm for the Wild-Built by Becky Chambers. The first book in the Monk & Robot series by Becky Chambers is well worth checking out and should be the start of a great story.

Centuries ago, the robots of Panga gained self-awareness and left. They all put down their tools and headed off into the wilderness, never to be seen again. It has been so long since they’ve been seen that they are now firmly in the category of myth and urban legend among the people.

Until one day, a tea monk is greeted by the arrival of a robot. The robot says that they have arrived to honor an old promise of checking in on the people. The robot just has one question and it cannot go back until the question is answered satisfactorily. The question is: what do people need?

Of course, that is a question with many answers depending on who you ask and how you ask them. To find the answer, they are going to need to ask this question a lot. 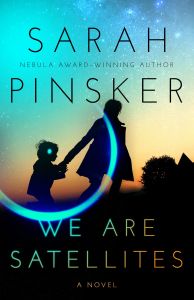 See at Amazon#4: We Are Satellites by Sarah Pinsker. I had to mention this book as it really hit me hard this year, a story about one family and the futuristic technology that threatens to tear them apart.

Val and Julie are parents who only want what is best for their children, David and Sophie. Their teenage son David returns from school one day requesting to get his own Pilot. The Pilot is a brain implant that is designed to help with school and the parents reluctantly agree. Little do they know, this is only the beginning.

At work, Julie is also feeling pressured to get a Pilot of her own in order to keep up with everyone else at work. This leaves half of the them with a Pilot and the other half, Val and Sophie, without them. The implication for this family and the world are soon clear: either get a Pilot or get left behind.

The government wants people to get it as well with subsidies and there no known downsides, and no way of stopping the technology from spreading. Sophie is trying to take a stand with an anti-Pilot movement which will put her right up against the company who makes them and worse, her own family. 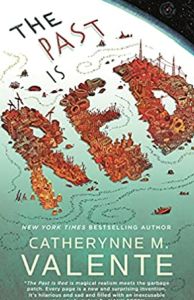 See at Amazon#3: The Past Is Red by Catherynne M. Valente. The book takes place in a world of endless blue outside of a few small places that float across the world. This book takes place on a floating patch known as Garbagetown.

Tetley Abednego believes that Garbagetown is the most wonderful place in the world. She is the most beloved girl in the whole town because of her attitude. She seems to be the only one who knows how good their home is and how full of hope it is, as well as the fact that you can love someone and 66% hate them all at the same time.

The planet is a terrible mess right now and having hope can be dangerous in this world. A lot of people become very angry with her while Tetley discovers a new friend, a terrible secret, and learns there is more to this world than she knew. 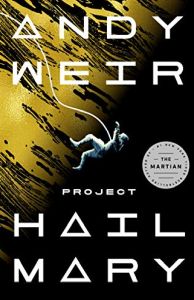 Ryland Grace is in deep space, millions of miles from home, the sole survivor of a last-chance mission to save humanity and planet Earth. The only problem is that right now he doesn’t remember any of that. He doesn’t even remember his own name, much less what he needs to do to complete the assignment. All he knows is that he has been asleep for a very long time and now finds himself in the depths of space with two corpses on the ship with him.

As his memories start to return, Ryland realizes the impossible task that he now faces. As he travels through space on this tiny ship, it’ll be up to him and him alone to figure out this scientific mystery and defeat an extinction-level threat to our species. At least he thinks so. 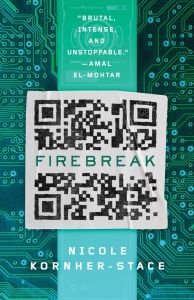 See at Amazon#1: Firebreak by Nicole Kornher-Stace. This book takes place in the future of 2134 as the United States have been replaced by two corporations, Stellaxis Innovations and Greenleaf.

The companies have split up the country’s forty-five stats and created supercities. New Liberty City is the only city split between the two corporations and is in a perpetual state of civil war because of it.

Mallory lives here and streams Stellaxis’s wargame SecOps on BestLife. She spends more time in the game than in real life in order to make enough money to live. One day Mal has a chance encounter with one of the rare super-soldiers in the game which leads her to a side job. The job will ask her to find a link from an actual missing girl to one of the SecOps characters.

As she gains more online fame, she is overwhelmed with fear of the repercussions over what she’ll uncover about BestLife’s developer.

Leviathan Falls by James S.A. Corey: This is definitely one of my favorite science fiction books of the year as the long-running The Expanse series came to an end. It’s hard for me to put it in my top-five though because it just doesn’t work without all that came before. Go back and read Leviathan Wakes first then work your way here.

Black Water Sister by Zen Cho: Jessamyn Teoh starts her a voice in her head soon after moving back to Malaysia and finds that it belongs the ghost of her grandmother. The ghost is determined to settle a score against someone who offended a mysterious deity known as the Black Water Sister. Jess finds herself drawn into a world of gods, ghosts, and family secrets as she fights for her own body and destiny.

The Last Watch by J.S. Dewes: The Divide is found at the edge of the universe and it is beginning to collapse, taking everyone and everything with it. The Sentinels, the lower tier of the military who no one wanted, are the only ones who can stop it. The recruits, exiles, and court-martialed dregs of the military just might be humanity’s last chance.

Klara and the Sun by Kazuo Ishiguro: When this author writes a book, I read it. When he writes a science fiction book about artificial intelligence? It’s one of my best books of the year, no doubt.

Shards of Earth by Adrian Tchaikovsky: A new series from the author of Children of Time begins with Shards of Earth. In this book, humanity created enhanced humans after the earth was destroyed. They were designed to fight the Architects, but then they disappeared and humanity’s heroes were obsolete. Idris was one of these heroes and he now finds himself, fifty years later, on a salvage vessel when they discover something strange in space that was abandoned by the Architects.

Some awesome titles on this list! I would add “We Have Always Been Here” by Lena Nguyen and “Light From Uncommon Stars” by Ryka Aoki!