There are many action hero franchises out there, but few are more nail-biting edge-of-your-seat drama thrill-rides than that of the Pike Logan series. Keeping readers hooked on his high-octane brand of white knuckle action, the American author Brad Taylor has been successfully writing his bestselling novels for an audience worldwide. The equally all American Pike Logan is an operative working for the United States government on the precipice of the law, away from conventional society as we know it. Doing whatever it takes, he must contend with all manner of threats to his country, both overseas and on his home turf.

Starting the series in 2011, Taylor would begin with the book One Rough Man, which would see the character of Pike Logan introduced for the first time. He would later follow this up in 2012 with the title All Necessary Force, providing Logan with his next mission as part of the highly secretive Taskforce outfit. As time has gone on, Taylor has regularly released books on a consistent basis since then, with over fourteen titles in the series so far and counting. Previously serving himself, Brad Taylor was in the US Army for over twenty-one years, along with spending eight years in the Delta Force. Commanding his own troops and men, Taylor has plenty of experience in the field, and it definitely shows in his work, giving it an added degree of authenticity.

Highly regarded by readers from all across the world, Brad Taylor writes in a distinct visual and precise style; one that gets straight to the heart of his story almost immediately. With ongoing arcs throughout the novels, there’s plenty on offer here, along with the individual stories and missions themselves. Still a consultant on defense for the US government, Taylor continues to write the Pike Logan series, with many notable highlights along the way.

My own top five personal highlights in the Pike Logan series follows as such: 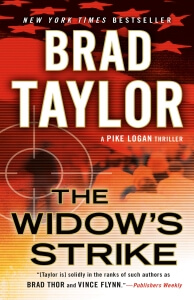 Infecting a female suicide bomber with Bird Flu, this terrorist known as a ‘Black Widow’ of Chechen descent will explode in the United States, releasing the deadly H5N1 virus toxin. Now it’s up to Pike Logan and his Taskforce to neutralize the enemy, as they face the clock in a deadly battle to take the target down. Travelling with his partner Jennifer Cahill, Logan heads across Southeast Asia towards the United States, on the trail of an enemy that may not be the one he should truly fear.

This felt wholly authentic to me, which is no surprise given that Taylor is well versed in the world of counter-terrorism, working for the government himself. The character of Pike is also well drawn here, this being the fourth title in the series, with three books prior having already well established the character. With the world of the series being laid out previously, this gets straight into it, delivering an exciting and well told action adventure story. 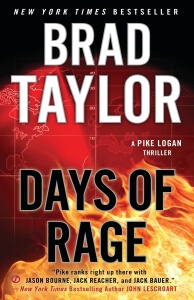 Aiming to put the Americans in a difficult position financially, Russia hands a deadly weapon of mass destruction to Boko Haram; an extremely fundamentalist Islamic sect in Nigeria. Initially the Russians believe it to be ineffective, but it turns out they’re wrong, and now Pike Logan must utilize his Taskforce to help neutralize the threat. It also appears that someone is stalking them on their quest though, as Logan finds the Russian FSB is holding a secret from the Cold War that could change everything.

Combining tense action and suspense with espionage and mystery, Taylor really is in his element here, as he kept me guessing throughout. It’s the sixth title in the series overall, and the world of Pike Logan is already well grounded, which means that it can be explored even further here. The relationship between Logan and partner Jennifer Cahill is also really well done once again too, as it’s fully fleshed out within the story. 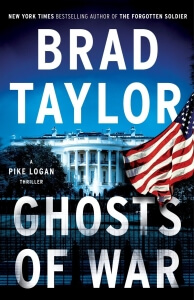 With one rogue operator having gone beyond their call of duty, the Taskforce is made to stand-down, all whilst Russia threatens to increase its influence. During a trip into Poland to help identify uncovered Nazi gold, Pike and Jennifer soon find themselves caught in a Russian incursion into Belarus. With tension between the East and West growing, they both start to learn of another agenda at play here, as it seems a showdown between NATO and Russia could be forced.

In this book it feels like there’s plenty going on, but it never gets too bogged down in plot elements, allowing the story to ultimately breathe. Constantly turning the page, I really wanted to know what was coming next every step of the way, as the mixture of thriller and action was compelling. With this being the tenth novel in the series, I really enjoyed seeing the characters grow too, as there was always something new to learn about them. 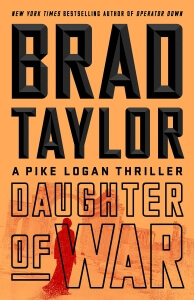 Alongside his Taskforce team, Pike Logan comes across the sale of Red Mercury after following the trail of a North Korean trying to sell US intel to Syria. Looking to use the agent on American and Kurdish forces, Syria aims to get people to re-evaluate their participation in the Syrian civil war. If unleashed this could be disastrous on a global scale, especially considering that North Korea also aims to get their hands on the agent, destabilizing the West even further.

Everything here seems to be on a knife edge at all times, which makes it extremely exhilarating to read in terms of action and suspense. This being the thirteenth title in the series also means that Taylor is upping the stakes, taking the story to even greater heights than ever before. With a huge sense of scope and scale, the characters at the center are never sacrificed in terms of depth and personality either, as the whole narrative draws you in and keeps you there. 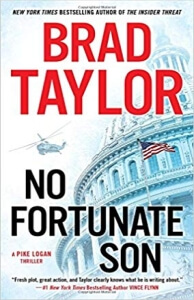 Awaiting their next mission, Pike and Jennifer are suddenly fired, despite having only just saved thousands of lives in a terrorist attack they averted with Taskforce. Although they’re initially furious, the two of them head to England, where the exchange student niece of their commander Colonel Kate Hale has disappeared. The Taskforce team have meanwhile been assigned to another mission, whereby they must defend the relatives of military families that have been targeted by terrorists, as everything appears to be connected.

With huge stakes at play here, and Pike and Jennifer essentially off the leash, this makes for one of the most thrilling installments yet. As the seventh title in the series, it really manages to make the most of its premise, taking the action up a full gear. Seeing what the characters can do when they’re thrown into different situations is also exciting, giving this story a whole other level.

Best Books & Series To Read If You Like Pike Logan:

Mitch Rapp: Originally written by renowned author Vince Flynn, before being handed to fellow writer Kyle Mills, this series focuses on the counter-terrorist agent Mitch Rapp. Working for the CIA he plays by his own rules, as those around him often have trouble reigning him in, with him doing what he does best. A thrilling collection of novels that really know how to keep up the pace, they allow readers to pick up the series at any point.

Jericho Quinn: Working as a special agent for the United States government, Jericho Quinn is a series written by the American novelist Marc Cameron. Running at breakneck speed, the stories are extremely well paced, allowing the character to come through, giving it a real sense of heart at the center of it all. There’s also plenty of action and suspense, as you really do feel a part of it in the immersive world that Cameron has created.

Charlie Fox: These come from the British author Zoë Sharp who has been creating the Charlie Fox series of novels for some time now. Looking at the life of its eponymous heroine, it sees her as an ex-military operative turned bodyguard undertaking a series of different assignments. The character herself is extremely well drawn, and the stories really held me there, as I found couldn’t put them down with their gripping use of suspense.

Victor the Assassin: The English novelist Tom Wood has written numerous stories about his assassin without a past named Victor. They really do evoke a sense of mystery, as I continually found myself wanting to learn more about the character and his history. Taking out his targets on various orders, he lives by himself and not much is known about him, except that he’s extremely good at his job.

Liz Carlyle: British author Stella Rimington has really created something special with her Liz Carlyle novels, following the ever driven MI5 Intelligence operative. Working for the counter-terrorism arm of the MI5, she must deal with the male dominated environment around her, all whilst ensuring that justice prevails. The stories are very well written with a clear love for the genre, and it’s definitely a series that kept me engrossed from the outset, eagerly awaiting each new release with anticipation.

Poisoned Pen Podcast – Brad Taylor: Talking to the host Barbara Peters, Brad Taylor gives an insight into his Pike Logan novel ‘Operator Down’. It’s a great look at his creative process, what the character means to him, and how he’s evolved over the years.

Authors on the Air Radio – Brad Taylor: Speaking about his novel ‘Hunter Killer’, Brad Taylor looks into how he created the fourteenth novel in the Pike Logan series, and the story behind it. It also provides some interesting background on Brad Taylor himself as author, looking at his inspirations and techniques.

Nothing’s Off The Table Podcast – Brad Taylor: This takes a more general look at Brad Taylor as an author, examining who he is and where he’s come from. It’s definitely a must for any fans of his work, and for fans of the thriller genre overall, as it really offers a fascinating window into his life and career.