Known for his highly uncompromising and highly transgressive fiction, Chuck Palahniuk writes incisive and intensely visceral stories. Often not for the faint of heart, he’s a gifted storyteller with a cutting and absurdist sense of humor underneath it all. With tautly plotted narratives coupled with well-written iconic characters, he’s a singular voice within the literary industry. Using real-life experiences, many of them sourced from other people, he shines a light on the darker aspects of human nature. Never holding back, his books provide slices of life with protagonists who are typically shown teetering on the edge, all whilst using a darkly vivid style.

The first novel that Palahniuk would submit was Invisible Monsters, but this would be published later in 1999 as his third book. It was his first novel that would really make his name, though, as Fight Club came out in 1996 to much fanfare. Immediately striking a chord with both critics and general readers, his hard-hitting satire of manhood and masculinity would instantly pack a punch with audiences worldwide.

Not only that, but it would fast go on to become a major Hollywood film starring Brad Pitt and Edward Norton in 1999, which would soon develop a cult following of its own. The themes and ideas of the book have been debated endlessly, with critics going back and forth, as one of its strengths lies in it having many layers to it. Over time Palahniuk has built a reputation for himself as being that of an author who speaks and writes candidly.

Writing the short-story Guts, which came from the collection Haunted in 2005, he’d cause a lot of controversy due to its extremely graphic nature. Other novels would include Lullaby in 2002, which would also be well received by the public and critics alike, further cementing his reputation.

There have been various different adaptations of Palahniuk’s over the years, as well as working in different mediums too. Following up ‘Fight Club,’ he’s written two graphic-novel sequels, continuing the story and the world with the same characters. Other films adapted from his work include the 2008 feature Choke from the 2001 novel of the same name, and Romance in 2012. Winning awards too, he would receive both the Pacific Northwest and the Oregon Book Award in 1997 for his debut release, and then the Pacific again in 2003 ‘Lullaby.’ He’s a writer with plenty of other career highlights too, as many of his books stand out from the rest. 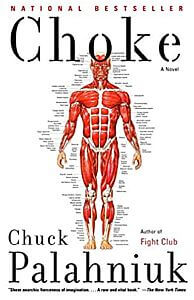 Dealing with Victor Mancini, this takes a look at his life as he goes about scamming individuals who ‘save his life’ after he pretends to choke in upmarket restaurants. Feeling they’ve saved him and that he’s now their responsibility, they send him money to support him, which he then uses to support his aging mother in care. Not only that, but he also attends sexual addiction clinics, not with the intention of finding help, but finding action, all the while working in a colonial theme park by day.

As social satires go, this really is up there with the best, as it features a compelling, if somewhat troubled, lead in Victor. Using his trademark minimalist style, it’s short, sharp, and snappy, with some brilliant moments of searing wit and humor. Long-term fans of the author will likely recognize many of his tricks by this point, but as a classic Chuck Palahniuk novel, it delivers. 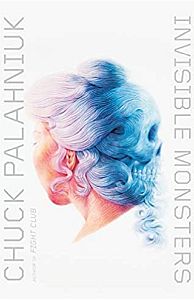 Going by multiple different names, mainly Daisy St. Patience, the narrator and protagonist of this novel is a catwalk model who suffers a horrific motoring accident, disfiguring her in the process. This leads her to be shunned by everyone she once knew, essentially becoming an ‘invisible monster’ now at odds with her old life. Stepping onto the scene is one Brandy Alexander, as she takes her under her wing, teaching her how to create her own identity, all the while exacting revenge on her cheating ex-boyfriend and her once best-friend fellow model Evie.

This is one Chuck Palahniuk novel where he definitely doesn’t hold back, pushing the premise and the descriptions to their full potential. Underneath it all, there are more profound ideas on beauty and what it actually means as a concept, looking at it without resorting to simplistic platitudes. Not forgetting the trademark Palahniuk dark humor, it’s a story that doesn’t waste any time and would also be a ‘Remix’ edition brought out in 2012 going even further. 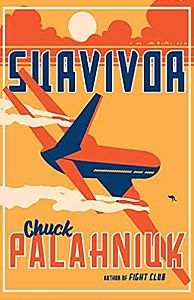 The pilot Tender Branson is soon to crash into the Australian outback as he, at 39,000 feet and the only surviving member of the Creedish Death Cult, tells his life story to the flight recorder of Flight 2039. Once a child of the cult, he retells his journey from being a servant to becoming a messianic media figure for himself. But behind the autobiographies and fame and celebrity, there would be a broken romance, along with a landfill of pornography on his own land.

Moving backward, the book is a clever one, with plenty of smart insights and one-liners to back up its intriguing premise. The story is funny, often to the point of being outright hilarious, and there’s plenty of character and intelligence to balance it out. Breathing life onto his own style of writing, too, Palahniuk takes it up a level, delivering something that is quite different in the process. 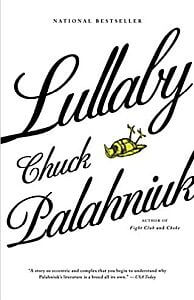 Investigating what has come to be known as ‘Sudden Infant Death Syndrome,’ reporter Carl Streator is running a soft-news feature on the phenomenon. It seems that all of the children were read a poem from the same library book the night before dying, and it soon transpires that the ancient poem is actually an African spell used for euthanizing the sick and the elderly. Himself a victim of the poem twenty years prior when he read it to his wife and child, Carl teams up with a woman who inadvertently killed her own child, and the two of them vow to destroy all copies of the book.

There’s an element of horror here, but it still manages to be hilarious at the same time, despite its increasingly dark premise. Again it’s not without meaning either, as there’s a strong subtext running underneath the story driving it forwards. It’s a fun but highly macabre ride from start to finish, with a shot of jet black humor and intrigue, making this one of his most entertaining novels to date. 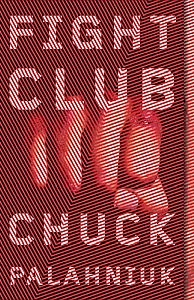 The narrator is living a corporate life that’s leaving a lot to be desired, as he’s unfulfilled by the company schedule that’s making him stressed and unhappy. Suffering from bouts of insomnia, he soon finds himself in the thrall of an enigmatic and exhilarating man named Tyler Durden. Together the two of them work together, building an underground network of ‘fight clubs’ whereby fights take place in the basements of bars. There are little to no rules except to see that the fight goes on as long as is needed, and nobody talks about fight club; they fight.

So this may seem like an obvious choice, being his most prolific and, some might argue, most misunderstood novels. A modern take-down of masculinity, this is an absurdist story taking its concept to ridiculous proportions, making for a hilarious and scathing read. Satirizing corporate culture and modern living, too, it’s a story with a strong narrative from start to finish and remains one of Chuck’s most compelling novels to date.

Best Authors To Read If You Like Chuck Palahniuk:

Hunter S. Thompson: This is one author that isn’t forgotten in a hurry, perhaps best known for his drugs fuelled novel ‘Fear and Loathing in Las Vegas.’ Using his own experiences as the basis of his writing, Thompson was very much a product of the sixties counterculture, opining on politics and culture in much the same way as Palahniuk. Writing at a fast and frenetic pace, he sweeps the reader, making them laugh and shocking them in equal measure.

Bret Easton Ellis: Coming from the same generation of writers as Chuck Palahniuk, both he and Bret Easton Ellis would release well-received and searing novels around the same time. Both would also have critically acclaimed films produced from their satirical books, with Ellis releasing ‘American Psycho.’ This would make a strong legacy, as he’d become one of the leading voices of Generation X, making a powerful and angry statement in the process.

Jim Carroll: The American writer James Dennis Carroll, or Jim Carroll as he was more commonly known, was an author, punk musician, and poet. Highly regarded, he wrote ‘The Basketball Diaries’ in 1978, which was an autobiographical memoir drawing from his own life and experiences growing up. Dealing with his heroin addiction as well, the book would also be made into a film in 1995 starring Leonardo DiCaprio in the lead role.

Monica Drake: Praised by none other than Chuck Palahniuk himself, Monica Drake similarly deals with dark subject matter in a humorous and satirical manner. Oftentimes laugh out loud, Drake doesn’t hold back either, knowing exactly when and where to land her punches. Making for an extremely engaging writer, she’s easy to pick up, despite containing multiple layers beneath her narratives.

Irvine Welsh: As a writer often dealing with the Scottish working class, Irvine Welsh is a funny and engaging writer with a fearless sensibility. There’s plenty of political themes and subtext to his stories, often shocking the reader with his no-holds-barred portrayal of reality. Films have also been adapted from his work, starting out with ‘Trainspotting,’ which would come to exemplify the nineties in many ways.