Harry Potter is one of the most iconic characters in book history. J.K. Rowling’s books have made an indelible mark on the world with popular movies, video games, and even a theme park.

The first novel in the series was Harry Potter and the Sorcerer’s Stone which introduced us to this whole world. It was not long after its release that a cult following ended up developing around the series with each new entry in the series being hotly anticipated.

J.K. Rowling is the author of the series which finished up with the release of Harry Potter and Deathly Hallows in 2007. Rowling has come under scrutiny in recent years thanks to some political stances, but its hard to ignore the impact of these books and the lasting place they hold in the hearts of the fans.

The series did not invent the book series, but it definitely helped to popularize it. It’s rare now for a book aimed at younger readers not to have a plan for multiple books. There have been many copycats, but there is still only one Harry Potter. For a list like this, it’s not about finding the best “Harry Potter clones” out there, but finding books that make readers feel the same way that these books once made them feel.

The seven Harry Potter books have spawned eight movies with additional movies based on The Fantastic Beasts and Where to Find Them which deals with the era before Harry was born and Dumbledore was a young man. There have been many rumors of a television show based on the property as well and that will likely happen at some point. There is just too much material for that not to happen.

Readers can find many “If you like Harry Potter…” articles online, but I think a lot of them are missing the mark. For instance, I have seen a lot of people recommend The Magicians series by Lev Grossman and that is far too basic of a connection to make. The Magicians features college students and magic, but it is also very dark and depressing at points. That’s kind of the opposite of Harry Potter and how it made readers feel. I’m a fan of both, but I would never recommend that to a fellow Potter head!

I tried to put my head in that space of what made me feel the way that Harry Potter books made me feel when I read them and these are what I came up with.

Percy Jackson and the Olympians series by Rick Riordan 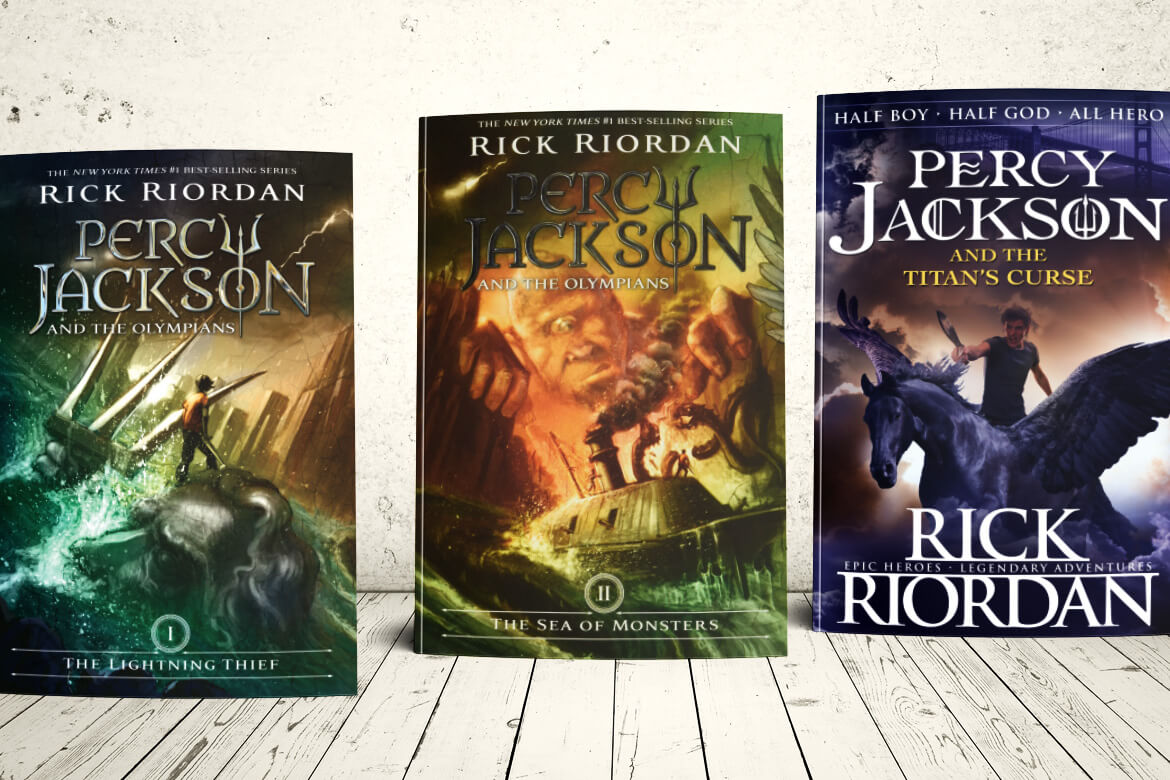 You’ve probably heard of this one as it has been adapted for a movie, a Broadway musical, and a Disney+ series. Despite that, this list wouldn’t be complete without it and is a must-read for any fans of the Potterverse.

The series begins with The Lightning Thief which introduces us to the title character. Percy has always had issues with school and controlling his temper, but that has only gotten worse now that he has gone away to boarding school. Things are even tougher for him here as not only is he having trouble with school, but he could swear that his pre-algebra teacher turned into a monster and tried to kill him.

When Percy’s mother hears about this she knows that it is time to tell her son the truth about who he is and where he came from. So Percy heads off to Camp Half Blood, a summer camp for demigods, where he learns that his father was the Greek God of the Sea, Poseidon. Percy manages to make friends with a satyr and the demigod daughter of Athena. The three of them investigate a mystery that will lead them to the gates of the Underworld as they look to prevent a war between the gods.

Percy reminds me a lot of Harry as a character, but he is definitely his own person with some great friends and that’s what gets this one on my list.

The Secrets of the Immortal Nicholas Flamel series by Michael Scott 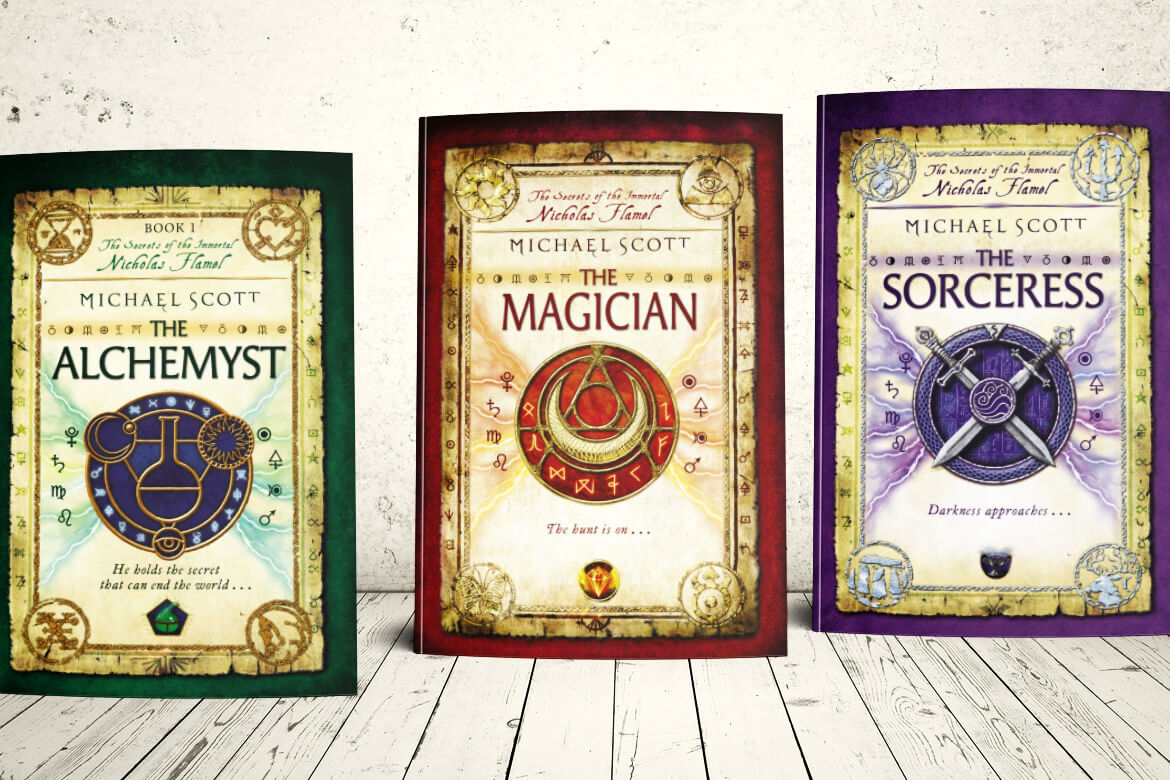 Nicholas Flamel actually appeared in the Harry Potter series in a minor role, but there is a whole lot more to the character as we can see in this book series by Michael Scott. (No, not the guy from The Office.)

Flamel was known as the greatest Alchemyst who ever lived. The key word there is lived as the records all show that he died in the year 1418. However, his tomb is empty and the legend states that his tomb is empty.

The secret to eternal life is in the hands of Flamel who discovered the secret in the Book of Abraham the Mage. Dr. John Dee knows all this and has plans to steal the book and grant himself eternal life. The only ones who can stop him are Sophie and Josh Newman, who the prophecy states have the power to do so. Now, if they can just figure out how to use it.

This series does a great job of combining the magic and mystery of the Harry Potter books with the battle between good and evil that makes for any good story. 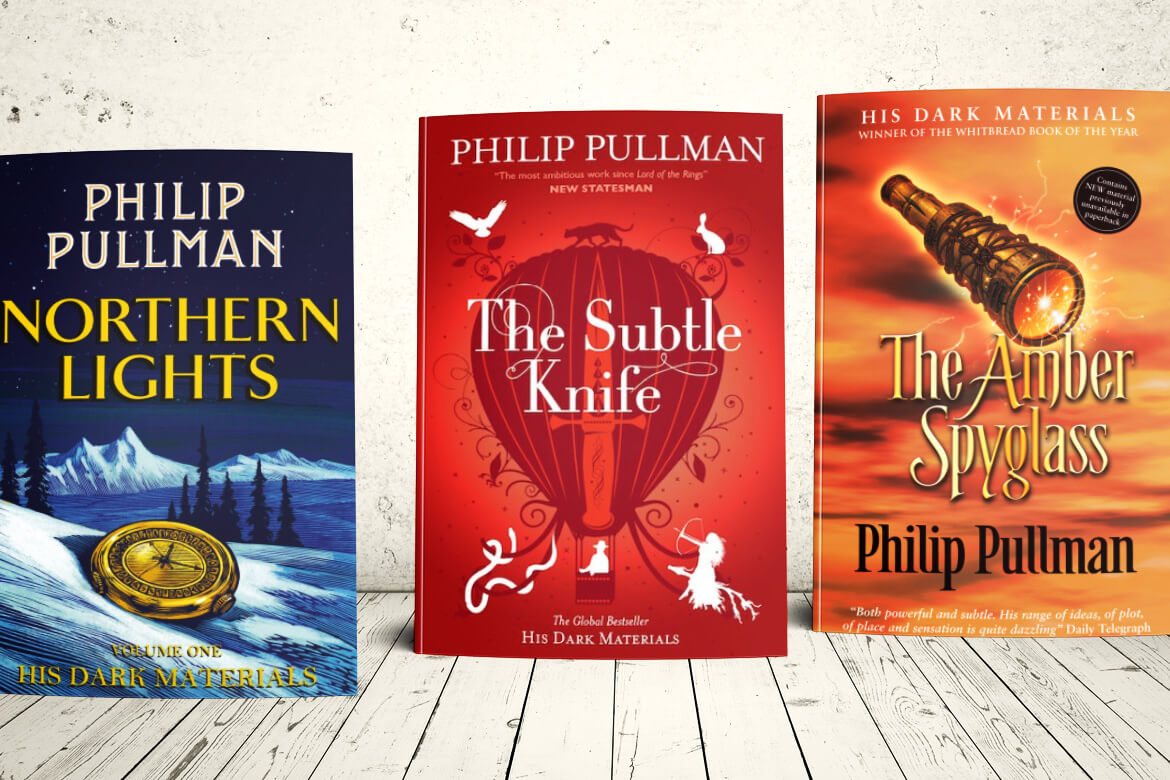 The Golden Compass , also known as Northern Lights is the first book in the His Dark Materials series. It has been called one of the best juvenile fantasy series of the past twenty years and that is something I find very hard to argue with.

The book sees a young girl named Lyra who lives in a world quite unlike our own. A world where everyone has their own personal daemon, a manifestation of their soul in animal form. This is a world in which science, theology, and magic are all closely aligned.

Lyra and her daemon, Pantalaimon, are rushing to the cold Far North which is ruled by witch clans and armored bears. It is a dangerous place where Gobblers will take the children they steal which is exactly what happened to Lyra’s friend Robert. It is also the place where her uncle is trying to build a bridge to a parallel world.

This is a series that is great to read with children, but is much more rewarding if you are older and more understanding of some of the complex, heart-wrenching plots that the book presents. 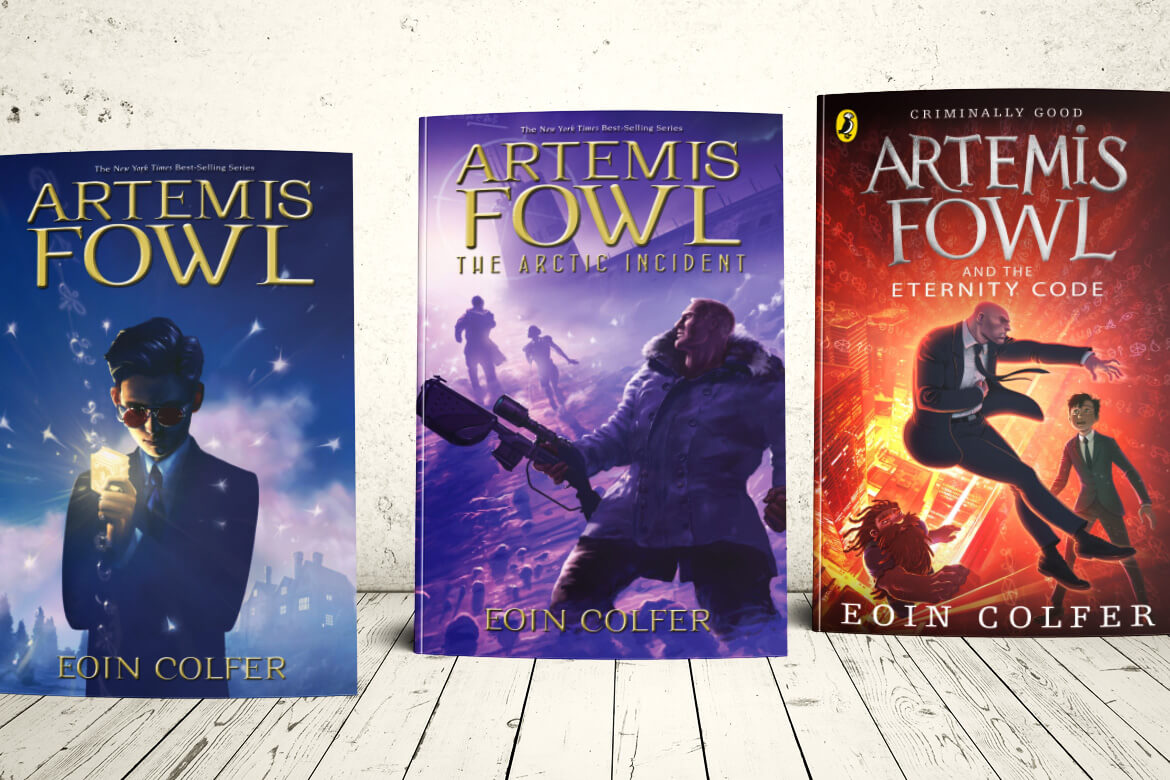 This is a fun series because unlike Harry Potter, Artemis Fowl is no hero. He has a noble goal, but he will do whatever it takes to accomplish his goal and that includes doing some bad things. Artemis is a true anti-hero and a great introduction to the archetype for younger readers.

Artemis is a criminal mastermind kid from a long line of wealthy criminal masterminds. However, when his family fortune is lost, his father goes missing, and his mother goes mad with grief, – Artemis decides to do something about it. His plan to get his family fortune back involves kidnapping a fairy and holding it for ransom. His plan is not a good one though as the fairies have much more power than he imagined and they will go to great lengths to protect their money. He also underestimates just how cunning the fairy he kidnapped will be. Artemis’ grand plan may backfire in a major way and lead to a cross-species war.

The Artemis Fowl series is not a Harry Potter clone, it is wholly unique in character and story. The first novel in the series is #1 in my Best Eoin Colfer Books article and if you know how talented he is – you know that is a strong recommendation.

A Wrinkle in Time by Madeleine L’Engle 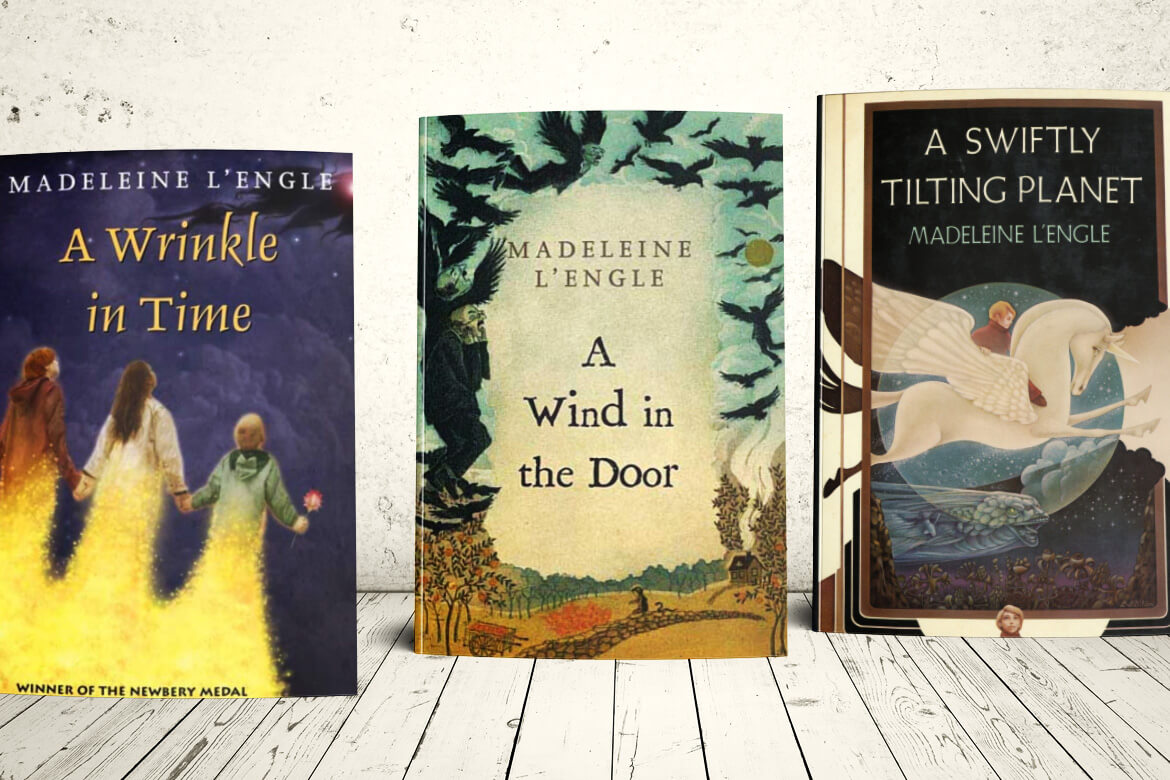 It could probably be argued that there would be no Harry Potter if it wasn’t for Madeleine L’Engle’s 1963 Newbery Medal winning A Wrinkle in Time. This book is practically the definition of a classic that has inspired generations of readers. It is a book for all ages and all times of our life, one of the best stories ever told in the medium.

The story follows Meg, an awkward young girl, who has to find the courage to save her family. A mysterious visitor to their home sends Meg on a trip through time and space to find her father.

All of the best parts of Harry Potter inspire us to be better in our own life. A Wrinkle in Time does as this well and it inspires the reader to accept responsibility for their own actions, to accept others as they are, and to accept fear and be brave. A classic book that I can go back to time and time again and never get sick of.