There are few authors who have made quite the impact that C.J. Box has made with the Joe Pickett series. He made his debut in 2001 with Open Season and the series has captured the imagination of readers ever since.

Box himself was born and raised in Wyoming, the same place where the Joe Pickett series is set. His knowledge and familiarity with the area really shines in the book series as many people praise the way that you can really feel the location when reading this series. His writing style not only gives you the feel of this location, but also is packed with action and the life of a cowboy.

Open Season was published in 2001 and won him the Anthony Award, the Gumshoe Award, the Macavity Award, and the Barry Award for the Best Debut Novel of the year. It was also named as a New York Times Notable Book. His success in writing ultimately lead to him focusing fully on writing. He continued the series in 2002 with Savage Run and then Winterkill in 2003. The book series has since been adapted for television by Spectrum Originals. The series stars Michael Dorman as Joe Pickett and Julianna Guill as Marybeth.

One of the reasons people love this series is Joe himself. He is stubborn and old-fashioned, but he is also a hero who shoots straight. He’s human and he has flaws. Pickett is a tough and soft-spoken family man. He’s exactly the kind of man that you want as a game warden and the complete opposite of a lot of the trigger-happy lead characters in mystery and thriller books.

When making a list of similar authors and books series to C.J Box and the Joe Pickett series, I took all of that into account. Readers who like these books are looking for mystery with a strong character they can connect to. 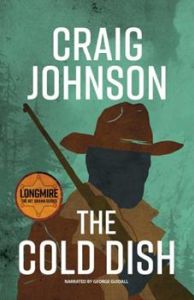 See at AmazonWhen I think of a series that C.J. Box/Joe Pickett fans would like, my mind immediately goes to the Walt Longmire series by Craig Johnson. They are both set in Wyoming, they are both great mystery series, and they both feature memorable main characters. The book series has also been adapted for television, A&E’s Longmire.

Longmire spent twenty-five years as the sheriff of Absaroka County and is ready to finish out his career in peace. However, that doesn’t appear to be in the cards when Cody Pritchard is found dead near the Northern Cheyenne Reservation.

Cody was a local boy who, two years earlier, was given a suspended sentence for raping a Cheyenne girl along with three other boys. The case looks to be one of vengeance and now the other three boys appear to be in the cross-hairs with only Longmire standing between them.

Regardless of their motives, Longmire sets out to see that more deadly revenge is off the table. 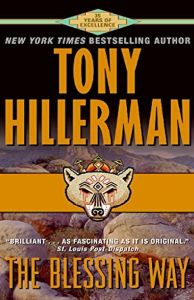 See at AmazonThe Leaphorn, Chee & Manuelito series takes place in the American Southwest and follows a group of Navajo Tribal Police officers. The series is very much apart of its setting and also features some great insights into the Navajo culture.

This book series began as being about Joe Leaphorn of the Navajo Tribal Police. Then it added Jim Chee to the mix and many great books were written. Finally, the authors added Tribal Police Officer Bernadette Manuelito to the team as things went on and the series never really skipped a beat.

The first book, which does not feature Chee or Manuelito, is called The Blessing Way. The case that Navajo Tribal Police Lieutenant Joe Leaphorn is assigned is very disturbing with the victim discovered with a mouth full of sand in a high and lonely place. There are seemingly no tracks or clues that point to a killer. Despite his better judgment, Leaphorn begins to suspect that it could be something supernatural that was responsible for this crime. Specially, a Wolf-Witch. His hunt will lead him on a dangerous trail between mysticism and murder. 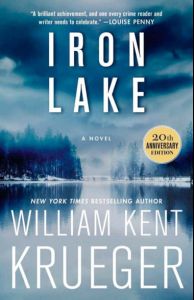 See at AmazonThe Cork O’Connor Mystery series is one that every mystery and crime fan should check out. The series has been very well received over the years and Kent Krueger has been awarded with the Edgar Award, Minnesota Book Award, Northeastern Minnesota Book Award, Dilys Award, Lovey Award, and Anthony Award for books in this series.

The character of Cork O’Connor is a part Irish, part Anishinaabe Indian, former sheriff of a small Minnesota town. Similar to Pickett, he is an honest family man who shoots straight. He’s a human being just trying to do his best.

The book series began in 1999 with the release of Iron Lake. The story begins with Cork struggling from the meltdown of his marriage which took him away from his children. Now, he gets by mostly on caffeine, nicotine, and guilt. O’Connor is a former Chicago cop who has just about seen it all, there is not much left that can shock him. That fact is tested though when a judge in the small town is murdered and then a young Eagle Scout goes missing. The event springs Cork into action and he begins his investigation into this case of conspiracy and corruption that centers around a small-town secret. 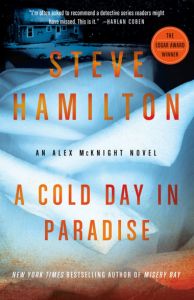 See at AmazonA Cold Day in Paradise won both the Edgar and Shamus awards for Best First Novel when it was released. Similar to Box’s rise, the success of that book changed the author’s life and created a long-running series and lead character.

Alex McKnight lost his partner and took a bullet in his heart, but he has done his best to move past it and leave it behind him with the man who did the deed long since locked up in prison. McKnight now makes his home in Paradise, Michigan, in a small cabin in the woods, where he tries to live a simpler life.

However, he is soon pulled back in when a killer on the loose shares the same unmistakable trademarks. McKnight can’t know who else would know the details of those old murders, but he’ll look to find out. However, the answers won’t come easy as the town of Paradise proves to be anything but.

The setting of Michigan is pretty far for Wyoming, but Hamilton paints it with a similar, realistic brush as you’d find in the Joe Pickett series.

two more great series with the same feels as CJ Box is the Mike Bowditch series by Paul Doiron and the Arliss Cutter series by Marc Cameron.