Welcome to my article on the Best Mystery Books of 2018.

There are obviously a lot of mystery books released every year, and trying to read all of them would be impossible. So my method is simple: I look at various sites who hand out awards or do reader polls on the best books within a genre, and then compile a big list.

I also check bestselling lists for the year and look for any books that would be classified under the mystery genre.

I then go through and read these books, and give my own evaluations.

I’ll list what I feel were the best 5 mystery books of 2018, and then give some honorable mentions.

With that said, let’s get on with my opinion on the best mystery books of 2018. 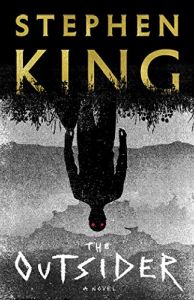 See at Amazon#5: The Outsider by Stephen King:

First let me preface this by saying I go into every Stephen King book now expecting a weak ending (and this one delivered). It’s just the way it is with King I find. I love the journey but the destination is always disappointing.

The horror master was able to deliver a great mystery book when an 11 year old boy is found dead and violated in a park. There is an ironclad case against a local man even if he has an alibi. This was a thoroughly enjoyable book that kept you guessing all the way through. 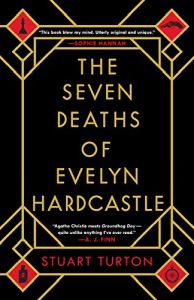 See at Amazon#4: The 7/12 Deaths of Evelyn Hardcastle by Stuart Turton:

Think the movie Groundhog Day and you’ve got this book. There is a party and the young daughter Evelyn is killed. However she day will repeat itself and she will be killed again and again. One of the guests of the party, Aiden, must solve the murder to stop this cycle. However Aiden keeps waking up in the body of a different person each day.

What I love about this type of book is how different a concept it is compared to all the other mysteries I normally read. It was very different and while I felt it started slow, it really got going and I found myself really into the story. This was a “Book of the Year” winner by the Guardian and Daily Telegraph among others. 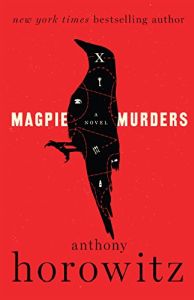 The 2018 Macavity Award Winner for Best Novel. This is a classic whodunit that I wasn’t able to put down. Susan Ryeland, a book editor, is given a manuscript by the author Alan Conway. She has worked with him for years and isn’t expecting any surprises. However when she reads this murder mystery that he has written she feels there is more to it than meets the eye.

This was a thrilling book and was actually the first book I had read by this NYT Bestselling Author. It was the type of book that gets you to immediately seek out more books by him. Very good book. 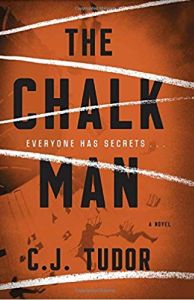 Hard to believe this was his debut. C.J. Tudor really hit the ground running with this book that won an ITW Thriller Award and was winner of numerous Best Debut Novel awards.

The story begins in 1986 where Eddie and his pals use chalk men (stick figures they draw) as hidden messages for each other. Then one day they discover a chalk man that leads them to the woods where they discover a dead body. 20 years later Eddie is an alcoholic and trying to put his past behind him. Then he receives a letter which contains the same chalk man his friends and him saw that led them to the body. One of his friends was killed, and Eddie realizes the murderer isn’t going to stop until he discovers the story of what happened all those years ago.

I remember going into this one a bit wary due to all the hype however I ended up loving it and it was a fantastic mystery book. C.J. Tudor went right on my “blindly buy” list following that one. 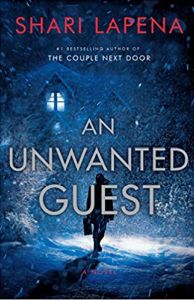 Shari started out by doing psychological thrillers along the same lines of Gone Girl etc however she has evolved and this is a classid “murder mystery’ book along the same vein as Agatha Christie etc. It takes place at a remote lodge in upstate New York which is without phones, internet etc due to the weather. There are numerous people staying there and they keep getting killed. You know the drill.

Anyway this was without a doubt my favourite mystery book of the year. It was such a pleasant surprise as I expected another psychological thriller and was instead presented with a fantastic murder mystery.

Past Tense by Lee Child: I was actually so close to putting the 23rd Reacher book on my list above. What stopped me is it is more “thriller” than mystery. However after some rough outings, I felt Lee Child was able to recapture the magic and the mystery of the couple who were isolated at a motel really hooked me. If you’re one of many I know who have stopped reading Reacher – give Lee Child another try with this book.

The Woman in the Window by A.J. Finn: This one hit all the best seller lists but I’ve got to say I found it quite slow. One of those books where I really didn’t get all the excitement about.

The Death of Mrs. Westaway by Ruth Ware: Ruth Ware of course hit the scene with The Woman in Cabin 10 and I was interested to see if she could follow that up. This one is about Hal who receives a mysterious letter for the wrong person about an inheritance, however attempts to use her skills to claim the money. I felt it was solid enough and it was good to see Ruth able to follow up from her prior success.

The Flight Attendant by Chris Bohjalian: A solid enough book that unfortunately had a very weak finish. It might have been Top 5 if not for that. Despite that I enjoyed the journey – just not the destination.

Something in the Water by Catherine Steadman: Another award winner and nominee. I thought it was an excellent book with a really cool plot (a couple on a honeymoon discover something in the water