Bob Lee Swagger is a book character and the creation of author Stephen Hunter. Bob Lee began his adventures in Point of Impact which has been made onto both a movie and television show.

Bob Lee is a retired Marine sniper who spent his time in Vietnam. He is one of the best snipers in the world and in the initial novel, spends his time alone on a hill in Arkansas. That is until the world comes calling.

The story of Bob Lee Swagger is an interesting one. Initially there was only the original trilogy. Stephen Hunter wrote various other books including standalone novels (with one having a connection to Bob Lee) and also books featuring Bob Lees father, Earl Swagger.

Before I get into the top 5 Bob Lee Swagger books I want to note that the top 3 are all the original trilogy and they are far and beyond better than the rest of the books in the series. This is not meant to be an insult in any way; however Stephen Hunter was at the top of his game at that time and the Bob Lee original trilogy is right up there in the category of “Best Books Ever”. I’ve lost track of the amount of time I have re-read them. 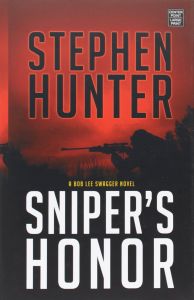 This was a bit of a different style of book from Stephen Hunter and I quite enjoyed it.

There is a female sniper who was one of the most dangerous women on earth. She had been hunted by the likes of Stalin and Hitler. However she basically disappeared from history. A reporter wants to get to the bottom of it and find out what happened to this legend and asks Bob Lee for help. Bob Lee looks into her last mission and decides that someone made her disappear. The question is why? Why would Russia attempt to forget this legendary soldier?

It’s one of those past tense/present tense books that Hunter loves to write and I felt he did a great job with it here. Particularly the writing in World War II; that brought out the best in Hunter.

I’d been struggling a bit to keep reading the Bob Lee books but this one brought me right back into the fold. 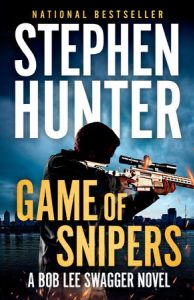 It’s funny as while I felt the Bob Lee series hit a huge lull when Hunter started writing it again, I feel he is getting better and the series has started to become enjoyable again. Game of Snipers was another solid outing for Bob Lee.

A woman approaches Bob Lee wanting him to essentially kill the sniper who killed her son many years ago in the war. Bob Lee agrees to help her and this sends him spiralling into a world involving Mossad and the FBI, and going up against a sniper who may just be as good as him. Bob Lee looks into it and then discovers that the sniper has another target on the go, and Bob Lee needs to find out who it is and stop it.

This was a rare book where I have to admit I sat there thinking “Bob Lee is back”. While it pales in comparison to the original trilogy – most books do. If you have given up on Bob Lee books over the years, give this one a try it may just surprise you. 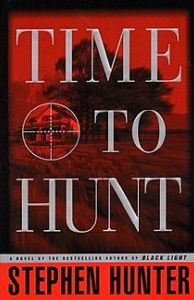 The third book in the original Bob Lee trilogy. The two prior books had an overhanging plot that finally led to this book – a Russian sniper had killed Bob Lees spotter during the war. And now he is back to kill Bob Lee.

This book jumps from past and present tense and the way it is written is exquisite. Stephen Hunter has did an excellent job at creating the legend of Solaratov and building up how dangerous he is. The story and how everything has come to be is written so well and he practically paints a picture via the written word. You’ll read about Donny Fenn and feel you were right back there with him in the 60s and 70s.

I always felt the ending was slightly weak. Just the way it all comes to a climax. Felt a little bit too “clever” for me. However it was still a very satisfying end to the original trilogy. 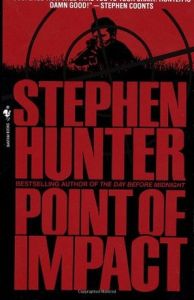 It says something about Point of Impact that this book isn’t #1 on the list. What’s cool about this book is it takes characters and the story from another Stephen Hunter novel, Dirty White Boys, and ties it in to this one very well. However if you hadn’t read Dirty White Boys then you wouldn’t be missing out. It was more just a bonus for us that have read it. On top of that it foreshadows the upcoming Earl Swagger series with flashbacks to the time Bob Lees dad passed away. Just genius writing.

Bob Lee is assisting Russ Pewtie, who is looking into the story of Earls death. There’s a lot more to it than meets the eye and of course there are people who would rather history stay buried and try and stop Bob Lee and Russ any way possible.

If you’ve read this book then you’ll know the ambush scene. A part that I still think about and gives me goosebumps just thinking about it. Absolutely exquisite writing. 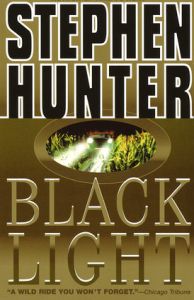 Absolutely zero question that this book has to be #1 on the list.

It has it all and is one of the best books I have ever read. A great plot. Excellent characters. And multiple scenes that just have you jumping up and cheering.

The plot is simple enough. People come to Bob Lee, who is trying to stay away from the world at his house on the Arizona hills. They ask the ex-Marine sniper to help them out; someone is trying to assassinate the president by sniping them and they need him to scout all possible locations. It ends up being a trap set in place to kill someone and then put the blame on Bob Lee. Bad news for the bad guys; Bob Lee miraculously escapes and is then on the hunt for the truth and revenge.

This book has everything. I always tear up AND cheer loudly at the same time when Bob Lee decides to go home and bury his damn dog. This book is a complete masterpiece.

Best Books & Series To Read If You Like Bob Lee Swagger

Nick Stone: Similar to Bob Lee Swagger, Nick Stone is an ex military man that always seems to run into trouble. Whether it be due to incidents that happen to friends or family, or freelance jobs that he is doing that run amuk – there’s always adventures to be found with Stone. This series is written by the infamous Andy McNab, who was captured during the gulf war.

James Reece: This series is written by former Navy SEAL Jack Carr. It begins with Reece waiting to snipe someone in a moving vehicle. What else do you need? The first book in the series is Reece going out for revenge on all of these people that wronged him and his family, and is full of action.

Earl Swagger: It should go without saying – but if you are reading the Bob Lee series you NEED to read the follow up series about his father. Just yet another incredible series and Earl was a very strong character.

Kyle Swanson: The Kyle Swanson Sniper series of novels is written by Jack Coughlin. An excellent series and if you are looking for more sniper related characters I’d advise reading the Swanson series.

Dewey Andreas: The name “Dewey” may not strike fear into your hearts but what this character crafted by Ben Coes lacks in name coolness, he makes up for in badassery.