Known for his extremely well paced character driven police-procedurals and crime novels, the American author Michael Connelly is a well regarded figure throughout the industry. Mainly focusing on his ‘Harry Bosch‘ series for which he is perhaps best known, he’s also got a number of other stories that intersect with this universe. These include his Mickey Haller titles featuring a lawyer working and solving various cases out the back of his car, defending the dispossessed. This has proven to be a highly successful formula for Connelly, with his books being translated into over thirty-nine languages worldwide.

Connelly would write his first novel in 1992 titled The Black Echo, which would also be the first in his Harry Bosch series. Setting the character up it would later be followed by The Black Ice in 1993, which would see Bosch as a character now firmly established. He would also write the The Lincoln Lawyer in 2005, which would be his first Mickey Haller book, and his sixteenth novel overall. The half-brother of Bosch, Haller would exist in the same world, with this being a spin-off series, along with the Jack McEvoy series. There’d also be the Terry McCaleb novels, which would feature more of an anti-hero in the lead-role, with the former FBI agent solving various different cases, whilst focusing on crime again.

An extremely popular television series has also been produced from his novels, with ‘Bosch’ running for five seasons now on Amazon Prime. Starring Titus Welliver in the lead-role, it features stories from the books themselves, with the timeline changed somewhat, but staying true to the themes and ideas of the original books. A film adaptation was also made of The Lincoln Lawyer in 2011, with Matthew McConaughey featuring as the main protagonist Mick Haller. Winning countless awards for his work, from the Edgar Award back in 1993 for his debut, to the Shamus Award in 2006 for The Lincoln Lawyer, he’s not without critical acclaim either, as there has been many notable highlights throughout his career.

These are my own person top five Michael Connelly books: 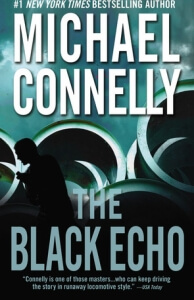 Following the discovery of a corpse in a drainpipe, LAPD detective Harry Bosch heads over to the Mulholland Dam for a case that becomes extremely personal. Previously having fought alongside the now deceased, the two of them had been ‘tunnel rats’ in Vietnam; individuals who were sent deep underground to flush out the enemy through a system of confined tunnels. With a killer now on the loose, Bosch must confront his own past if he ever hopes to catch the culprit and bring about justice.

This is a great series opener, as not only does it provide the perfect amount of backstory for its lead character of Harry Bosch, but it also offers an excellent mystery too. Setting the high standard of quality for the books to come, it manages to elevate the conventions of the police-procedural murder mystery, effectively turning them on their head. With a strong lead and a great plot, it’s a perfect example of the genre at its best, really showing what Connelly is made of as a writer. 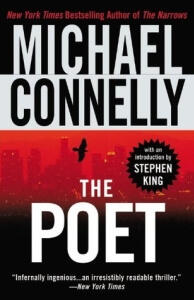 Working on the crime-beat as a reporter in the city of Denver, Jack McEvoy is dedicated to his work, specializing in violent deaths. That’s when his brother, a homicide detective, commits suicide, leaving Jack to deal with the case, as he copes with the trauma through writing about it. It soon transpires, though, that there’s a serial-killer on the loose murdering cops, whilst leaving poetic clues behind at the scene of the crime, as McEvoy decides to dig deeper.

This is territory that Michael Connelly is clearly familiar with, something which shows through the level of accuracy here, making for a wholly authentic read. Setting up the Jack McEvoy series as well, there’s further books to come, with this being a great opener for the overall series. Whilst this is also set in the world of Harry Bosch, he doesn’t appear here, with this case being referenced in the earlier Bosch stories. 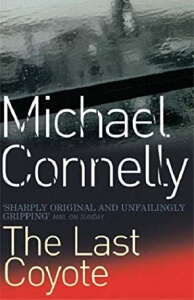 Following a physical altercation with his commanding officer, LAPD detective Harry Bosch is placed on leave indefinitely, whilst being summoned to visit an appointed psychiatrist. Initially reluctant to visit them, he soon finds that he’s burying some important issues, including the murder of his mother; a sex-worker killed whilst out one night. Opening up the case that’s now more than thirty years old, he starts to discover some inconsistencies in it, leading to him learning that the truth was covered up by someone powerful at the time.

Rooting for Bosch as a character every single step of the way, Connelly has made him an extremely intriguing character, this being the fourth title in the series. Really invested in who he is and his past, this was difficult to put down, as there’d be constant questions related to where he came from. Wanting to know more, the mystery resonates on a more personal level, both for the protagonist and for the reader. 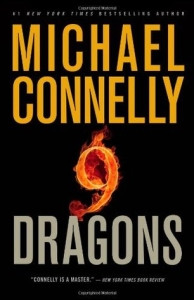 Heading into South LA, detective Harry Bosch is faced with the murder of a Chinese store-owner, in what appears to have been an armed robbery. Partnering with the Asian Crimes Unit, he soon learns that the killing may be the work of a Hong Kong triad, before subsequently finding that his daughter, Maddie, has been kidnapped in the city of Hong Kong itself, where she lives with her mother. Following the trail there, Bosch starts to realise that his case and her disappearance could be connected, as he’s pitted against the clock to find her before it’s too late.

With the Harry Bosch series well under way now, this being the fourteenth title in the franchise, Nine Dragons gets straight down to the action. Looking at the connection Bosch has between him and his family too, it gives him a very real and grounded sense of humanity that the reader can relate to. The narrative is also well paced, carrying the action along evenly, never once leaving the reader behind in this fun and involving thriller. 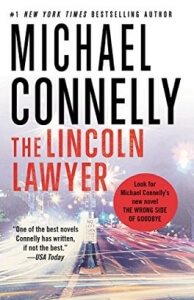 Defending clients of all kind, Mickey Haller is a Los Angeles based criminal defence attorney who works out the back of his Lincoln Town Car. Then he’s suddenly given a new high-profile case after a rich young man is accused of assaulting a woman in a bar, as Haller quickly takes up what appears to be a dream job. Things change fast though, as there’s more to the case than meets the eye, and he fast learns that he may have met true evil face-to-face.

Whilst Bosch may be one of Connelly’s most enduring characters to date, the story here is told extremely slickly in a highly compelling manner. The character of Mickey Haller is very well drawn, standing on his own as the quick witted and driven lawyer with a silver tongue. Working as a spin-off series to Bosch too, it’s a self-contained story in its own right, and it’s easy to see how this also became such a successful film.

Best Authors To Read If You Like Michael Connelly:

John Grisham: Writing legal thrillers mostly, American author John Grisham has become a household name for many across the world, with his suspense fuelled stories. Combining high-drama often with a strong message, Grisham himself would work in law prior to becoming a full-time bestselling novelist. Connelly has had similarities drawn between him and Grisham on numerous occasion, especially in regards to his Mickey Haller character, as well them both having their work adapted for film.

James Ellroy: Very much at the forefront of the crime and mystery noir genres for some time now, the American author James Ellroy is well respected throughout the industry. Writing in a highly distinctive style, his prose is short, blunt, and to the point, getting the message across extremely quickly and precisely. This has made his stories compelling to read, with many of them being adapted for film, such as the acclaimed LA Confidential in 1997.

Karin Slaughter: The American thriller writer Karin Slaughter is an excellent example of the crime fiction thriller genre at its best. She has an extremely precise understanding of the form, giving it her own unique twist, selling her work worldwide on an international scale. Now she has a deal with Netflix too, as her 2018 novel ‘Pieces of Her’ is set to be adapted into a television series going under the same title.

Jonathan Kellerman: As an American psychologist and novelist, Jonathan Kellerman is able to provide a uniquely deeper level of insight into the human psyche. This understanding has fed into his work over the years too, which can be seen in one of his most prominent characters; the child psychologist Alex Delaware who works with the LAPD. He has also had his work adapted for TV too, with the made-for-television-movie ‘When the Bough Breaks’ in 1986, featuring Alex Delaware on-screen.

Tana French: With a darker edge to her crime fiction, Tana French is a renowned Irish-American writer who excels in combining character and drama. Her stories are a masterclass in plotting, with their intricately woven narratives that are at once labyrinthine, yet easy to follow and understand. She keeps the stories grounded and real, something which she’s recently translated to the screen too, with her highly celebrated ‘Dublin Murders’ series for the BBC, based on her ‘Dublin Murder Squad‘ novels.

The B&N Podcast – Michael Connell: Talking directly about the background of his work, Connelly speaks on what goes into his stories and characters. Going over his Harry Bosch novels primarily, it provides an interesting window into who he is an author.

RNZ: Saturday Morning – Michael Connell: Providing more of an overview of his work, this sees Connelly examining his role as a thriller author. Looking at his life, it’s a must for any fans of the writer and of the genre as a whole.

Michael Connelly – Murder Book: This podcast series from Michael Connelly looks at true-crime cases in and around Hollywood that have largely remained unreported by the mainstream media. Previously a crime reporter himself, Connelly brings his own expertise to the subject, offering an otherwise unseen slice of real-life.

One author tops them all. Walter Mosley.