Creating dark and gritty mystery thrillers is something that the American-Irish author Tana French excels at. With her labyrinthine plots and well crafted characters, she really knows how to manage each twist and turn with expert precision. Famous worldwide for her bestselling brand of thriller fiction, she sets many of her novels in Ireland, evoking a dark and moody ambiance throughout. She also has a history in theatre acting, something which has translated into her work, as she’s able to fully get in to the minds of each of her characters.

Training at Trinity College in Dublin, Tana French would gain a background in acting, all the while reading mystery novels, which she’d done from a young age. During her late thirties she would turn once again to her love of thriller novels, becoming a writer herself, as she began to work on her debut novel In The Woods, which would come out in 2007.

This would also set-up her much loved ‘Dublin Murder Squad‘ series of novels, following it up in 2008 with the sequel The Likeness. There would be six books in the series, as they’d go on to become worldwide bestsellers, with their richly evocative narratives and finely crafted characters. Combining psychological thrillers with the police-procedural genre, she was able to get into the characters mindsets, creating a dark and gritty style that was very much her own.

It was in 2015 that she would have her work commissioned to be adapted into a television series, as ‘In The Woods’ and ‘The Likeness’ would be combined to create the first season of the BBC and Starz show, ‘Dublin Murders’. On top of this success she has also won countless awards, from the ‘Edgar Award for Best First Novel’ in 2008, to the ‘Los Angeles Times Book Prize’ in 2012, thus establishing her as a writer very much at the forefront of her genre. Reaching readers both nationally and internationally, she’s gained a worldwide audience, with a number of important highlights throughout her career.

Solely writing the Dublin Murder Squad series, these are my top five books from Tana French: 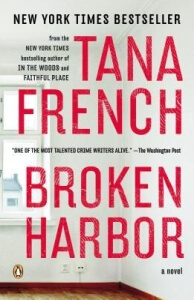 As the star of the Dublin Murder Squad, Mick ‘Scorcher’ Kennedy has made somewhat of a name for himself around the station. He’s then tested when there’s a murder involving a father, Patrick Spain, and his two young kids, leaving Patrick’s wife in intensive care. Kennedy must now take a trip down memory lane, revisiting his own troubled past on the now upmarket estate of Broken Harbor, in order to solve the case.

This is the fourth title in the Dublin Murder Squad series of novels, and it’s a great entry into an overall compelling franchise. Evoking a moody and foreboding atmosphere, it really gets to the heart of what the series is about and why it works so well. It also showcases the author brilliantly, making it a must for any fans of her work, as I found myself gripped from page one. 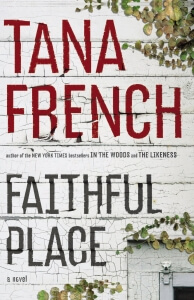 Growing up in inner city Dublin, Frank Mackey had a poor impoverished upbringing, leading to him deciding to run away at nineteen with Rosie Daly, but her not showing up. Believing that she went to London herself all those years ago, he suddenly has the past thrust on him again after the discovery of her suitcase in Faithful Place. Looking to investigate the case as a detective now, he aims to find out what really happened back then, all whilst his fellow squad want him off the case for being too close to it emotionally.

As the third book in the Dublin Murder Squad collection of novels, this delivered everything I wanted and more. The mystery itself follows many of the conventions of the genre, but it’s French’s handling of the material that makes it really work. Keeping me guessing at every point, I really cared about each of the characters, eagerly awaiting what would happen to them next. 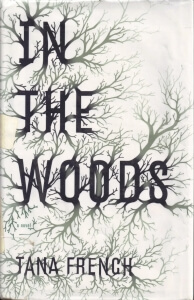 In 1984 there was a horrific event, as three children went into the woods, and only one was found clinging terrified to a tree; their shoe filled with blood. Twenty years afterwards, Rob Ryan still doesn’t know what happened when he was twelve, as he’s now a detective for the Dublin Murder Squad, putting the past behind him. His memories are brought to the surface once more though, following a similar case with an twelve year old girl, and now him and Detective Cassie Maddox must find out what’s been going on.

This was where it all began for Tana French as an author, and it’s easy to see the talent she held early on. A taut and suspense filled thriller, it definitely leaves nothing out when it comes to the tension and suspense department. Looking at themes of memories and how they change, it’s a fascinating look into the human mind, something that French is great at exploring. 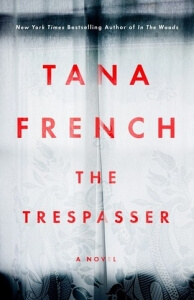 Accompanied by her partner Stephen Moran, the Detective Antoinette Conway is finding that life on the Dublin Murder Squad is nothing like she expected. Then she’s given the case of the young woman Aislinn Murray, who was murdered in what initially appears to be a domestic quarrel with her partner that got out of control. With her colleagues saying it was the boyfriend and to wrap it up, Conway believes there’s more to this case than meets the eye, and it seems that Aislinn knew she was in danger beforehand.

As the sixth title in the Dublin Murder Squad series, this shows a writer who is clearly confident with her material. Tana French carries the story forwards with a great deal of wit and style, allowing the reader to really become invested in the characters along the way. It’s a great instalment to an already wonderful franchise, and one that continually kept surprising me, despite coming to feel I know the series and author with the previous books. 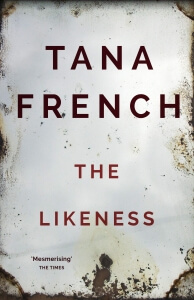 There’s a murder victim that looks just like Detective Cassie Maddox and, not only that, she has the same name that Cassie used whilst undercover on her ID. Needing to discover not only why this girl was killed, but her actual identity too, she soon finds herself thrown into a vast mystery. Surrounded by lies and deceit, Maddox must now deduce the fact from the fiction, looking into her own past as she does so.

The second book in the Dublin Murder Squad series, this will always be my favorite, as it does everything that it sets out to. With passion and a connection with each of her characters, it takes you along, making you feel as if no time at all is passing when reading. It also develops the characters further, ensuring you want to read more in the following books to come, cementing my love for the series as a whole.

Best Authors To Read If You Like Tana French:

Stieg Larsson: Writing the Millennium trilogy, Stieg Larsson was a hugely influential writer during his time, popularizing a dark and moody style. Coming from Sweden, he’d have an impressive career that many readers and writers still revere to this very day. There would also be various film adaptations of his work, both at home and in Hollywood, securing his legacy for generations to come.

Patricia Cornwell: Seen as an authority on the subject, the American writer Patricia Cornwall is known for her high degree of authenticity when it comes to the subject of forensic science. She achieves a level of realism quite unlike any other, so much so that television producers often consult her when working on show treatments. This has helped to elevate her work above the rest, allowing her readers to fully immerse themselves in her rich and inventive worlds.

Jo Nesbø: Coming from Norway, the writer Jo Nesbø is an extremely well regarded figure throughout the thriller industry. Using the environment of Sweden to full effect, he really is one of the main people to go to when it comes to a certain brand of Scandinavian thriller fiction. This has seen his work adapted for film too, although his own interpretation of the character of detective Harry Hole will always be the best out there.

Karin Slaughter: Knowing and understanding her genre well, Karin Slaughter definitely has a way with words when it comes to thriller novels. Writing in an extremely vivid and evocative style, she gets right to the heart of what works, never shying away from the darker subject matter. This gives her work that edge many other writers aspire to, always coming off as genuine and heartfelt in the process.

Jane Harper: Very much an Australian author, Jane Harper writes using the environment around her, making it extremely tactile and real in the process. Her character of Agent Aaron Falk is a great example of this, showcasing her talents as a highly versatile and skilled author. There is also set to be an adaptation of these novels starring Eric Bana in the lead-role, as her success continues to rise.

Writer’s Bone – The Trespasser Author Tana French: In this interview, Tana French talks to the host Daniel Ford on how acting has helped influence her writing. It also takes a look at where her ideas come from, and what goes into her novels.

The Book Review – Michael Lewis and Tana French: Speaking alongside the author Michael Lewis, Tana French breaks down her own work and career. This gives us an interesting look at who she is and how she started writing.

10 Minute Writer’s Workshop – Tana French: This offers a brief view of what the creative processes behind French’s work are and how she writes. It’s definitely a must for anybody looking to break into the genre themselves.