Peter has been writing since 2014 however I feel he really became popular in 2020 with his novel Eight Perfect Murders. I don’t believe I had ever heard of him prior to that then out of nowhere he was someone talked about among all my book circles.

As a big fan of psychological thrillers, after reading Eight Perfect Murders I was excited to see that Peter had various other novels within that genre.

Honestly every standalone thriller written by Peter is worth reading. It was tough to narrow them all down but this is my top list of Peter Swanson novels. 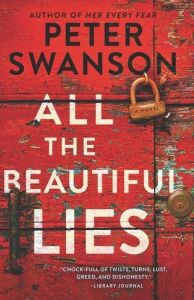 This is one of those books that is told from two different perspectives, and many years apart. One perspective is in the present and is from Harry – whose father has just died and he goes to visit his stepmother Alice and be there for the funeral. His fathers’ death appears to be suspicious.

The other perspective is from Alice many years ago growing up.

I love this style of book as we get to know a character and their past. I found myself a lot more intrigued in the Alice storyline and it really set all the groundwork in the book.

While this is low on the list, it was still a very solid thriller novel. It just didn’t reach the heights of the other Swanson books I’ve read. The backstory part in particular was excellent. Present-day just wasn’t as compelling. 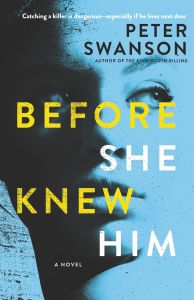 This was the first novel by Peter I read. Lloyd and Hen are a married couple who move into a new house. They meet their new neighbors and go there for dinner. Hen is immediately concerned about a trophy that she spots in the man’s office. Even more so when she visits the next day only to discover the trophy is gone. The trophy is related to a young man who was murdered years ago and the killer was never found. Surely her neighbor couldn’t be the killer? As there does seem more to him than meets the eye…..

….of course, what makes it not as simple, is the fact that Hen has had her own intense paranoia issues in the past. Is this all for real? Or just another manic episode?

Like most Swanson books, it uses a couple of different perspectives. I find Peter handles that really well – it’s a great way of discovering both sides of the story and in bits and pieces. This one went dark and twisted quite a few times and it was a great one. A real solid twist in the book and the story was resolved well. 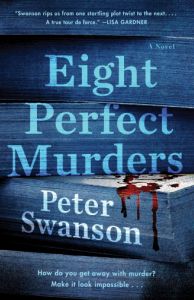 Malcolm Kershaw owns a bookstore. Many years ago, he wrote a blog post entitled “Eight Perfect Murders” where he highlights eight perfect murders from fiction. An FBI agent shows up at the bookstore one day. She is convinced that someone has read this blog post, and are working their way through the list and actually performing all of the murders.

This was a very clever and well-done book. It can be so tough writing on here at times – especially in relation to standalone thrillers like this – as you just don’t want to say too much.

I’ll just say this – the entire story about who is committing the murders is just a small part of the story of the book. I can see why this one was so popular – it was one that always kept you guessing and I thoroughly enjoyed it. It’s also such a great idea for a plot. 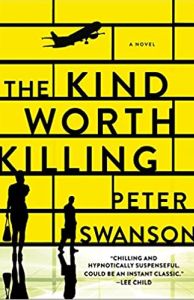 Two strangers meet in an airport bar while waiting for a delayed flight. A man and a woman. They get chatting. Next thing you know – they’re leaving the plane, after their flight, with plans to meet up a week later and murder the man’s wife.

First of all I read this one during the pandemic era. As someone who travels a lot and hasn’t traveled in awhile; my gosh I almost had a tear in my eye at the airport bar scene. So many great memories there. Of course, my great memories involve me sitting there quietly reading, not plotting to kill someone’s spouse!

This was a fantastic book with a lot of plot twists. There were some twists that were obvious but that actually isn’t a bad thing – they’re the type of thing that made me exclaim “I KNEW IT!”.

Peter also took some risks with this book – which I won’t mention in case of spoilers – to get emotional reactions from the readers and they worked. 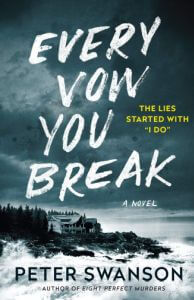 Abigail meets multi-millionaire Bruce, and the two arrange a date to get married. Alas on her bachelorette weekend, Abigail ends up cheating on Bruce with a random man she only knows as “Scottie”. The two don’t know each other’s real names however prior to getting married, she finds out that Scottie is walking about her hometown. He also has managed to track her down and sends her an e-mail.

Abigail goes ahead with the marriage despite the infidelity, and the two honeymoon at an exclusive heart-shaped island. Everything is going well until Abigail spots a familiar face at the same resort – it’s Scottie, the man she cheated with.

The twists and turns within this book were just incredible. I won’t lie when I say that after one particular twist happened I read the entire book in one sitting. This was one of those books where I was loudly exclaiming “Oh My God” at some of the things that happened. It was totally different from what I expected and that is a good thing. My favorite Swanson book thus far.

Best Authors To Read If You Like Peter Swanson

Shari Lapena: Absolutely fantastic author of standalone novels. She has a great combination of psychological thrillers and whodunnit mysteries.

B.A. Paris: Another excellent standalone thriller author. One of my favorites who always has great ideas and concepts.

Linwood Barclay: If you’re a fan of twists then this is the author for you. Great thriller author whose books have twists but in a way that always makes sense.

Gillian Flynn: Some of Peter’s work gets rather dark. If that is your cup of tea, then Gillian Flynn is the author for you!