Largely writing mystery thrillers, the British writer Zoë Sharp has an eye for action, creating strong and determined characters. These have stood the test of time for many of her readers around the world, as they continue to come back for more. Previously working as a photojournalist, she would later turn to writing crime fiction and thrillers, using her experiences to help inspire her novels. Included in this would be that of her Charlie Fox character, which would come about in part due to the death threats received during her dangerous line of work as a journalist.

Publishing her first novel in 2001, Sharp would release Killer Instinct, which would pave the way for her literary career. It would also be the first in the Charlie Fox series of novels, which she would soon follow up in 2002 with Riot Act. She’d produce over eleven novels in the series, as they’d come to be likened to Jack Reacher, with their high-octane brand of action. In 2013 she’d release the novel The Blood Whisperer, which would be one of her first stand-alone thrillers. The Fox series is what she’s become most famous for though, as readers eagerly await each release with anticipation.

Often speaking publicly too, Zoë Sharp is a regular fixture on the literary scene, drawing in crowds to each of her appearances. She’s also been optioned for television, with her Charlie Fox character becoming internationally recognized by both the public and critics alike. Moving the mystery genre forwards, she creates strong and resourceful characters that really do make their mark. Over the years she’s collaborated with well known writers such as John Lawton, along with winning awards such as the Short Story Dagger, as she continues to establish her name with many notable literary highlights.

These are my own personal top five novels ranked in order from Zoë Sharp’s career so far: 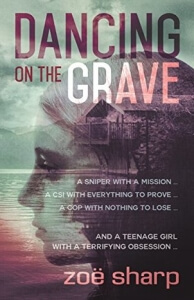 See at Amazon#5: Dancing on the Grave (2018)
Set in the Lake District there’s a killer on the loose, disturbing the rural idyll of an otherwise quiet English summer. Now Grace McColl is on the scene, and this case really is going to test her to the limit, especially with her wanting to prove herself after the mistake that cost the life of another. Transferring from London, Detective Constable Nick Weston is also investigating, as he hopes to put the past behind him after previously being left for dead.

This is a particularly tense opening to Sharp’s Lakes Thriller Trilogy, really setting the scene for the series to come. As an all round solid mystery thriller though, it definitely does what it sets out to do, keeping the reader glued there to edge of their seat. I also felt myself fully invested in the characters too, with them really coming into their own as the book progressed. 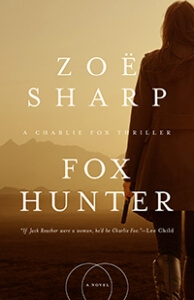 See at Amazon#4: Fox Hunter (2017)
Looking to put the past behind her, vowing never to get consumed with revenge for the soldiers who put an end to her army career, it seems history has finally caught up with Charlotte Fox. Heading out on an assignment as private bodyguard into rural Iraq, Charlie is tasked with locating a missing comrade. It’s then that she comes across the body of one of the men that wronged her, and she begins to wonder if a vendetta on her behalf is being carried out, as more bodies of the soldiers turn up, leading to her needing to put a stop to the killing quickly and quietly.

The twelfth book in the Charlie Fox series of novels, it’s great to see it still running strong as it ever was. All of the characters still feel fresh, with Fox herself being far more fully developed than ever, as her character is taken in a new and interesting direction. Testing her to the limit, it really sees what she’s made of, as she comes alive off the page, in a highly tense and taut thriller. 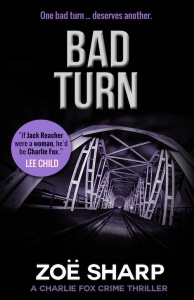 See at Amazon#3: Bad Turn (2019)
Quitting her job working in protection, Charlie Fox finds herself being turfed out of her apartment, forcing her to work for a shifty arms dealer. Starting out as an otherwise simple house-sitting job for the client, she soon finds herself embroiled in the affairs of billionaire arm’s dealer Eric Kincaid. Following an attempt on the life of his wife Helena, Fox must now contend with the external forces that want to put an end to their lives, all whilst holding secrets of her own.

This book really leapt out for me, in that it definitely tested the moral conviction of Charlie Fox as a leading character. Pushing her to the limit, it manages to bring another side to her, which is especially impressive considering this is the thirteenth book in the series. Not only that, but it also brings plenty of suspense and action to the table, giving the story a real sense of drive throughout. 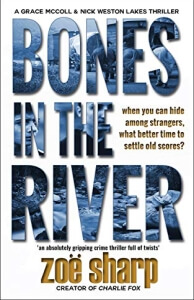 See at Amazon#2: Bones in the River (2020)
Hosting the largest traveller gathering in all of Europe, the Appleby Horse Fair has brought in a huge influx of 40,000 visitors into the small English town of Lakeland. With tensions rising between the locals and the travelling community, the arrival of the fair has become an annual occurrence. Now there’s a body in the river nearby and it seems someone wants to use the local animosity to the fair as cover for their crime, and it’s this case that Crime Scene Investigator Grace McColl must solve, along with Detective Constable Nick Weston.

The second novel in the Lakes Thriller Trilogy, this would bring another suspense filled mystery for the pair to solve. Set in the Lake District it’s a great piece of story-telling, plus there’s some interesting issues and commentary brimming under the surface. Carrying the plot forwards, Grace and Nick really hold it all together, as I definitely felt as if I got to know them. 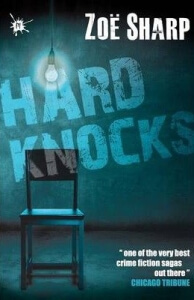 See at Amazon#1: Hard Knocks (2003)
Going undercover with Sean Meyer, Charlie Fox is initially reluctant to find out how her old army comrade was murdered. Having been betrayed by the now deceased Kirk Salter, Fox begins to unravel secrets from her past that she rather would’ve remained buried. With a trail of murdered bodies all across Europe it seems that time is of the essence, and she’s got to make it through the elite school of Major Gilby if she wants to learn the truth.

This was a tough and exciting read, with a straight-forward premise that definitely hit kept me glued to my seat. Containing a lot of action packed moments, it really worked at building the tension constantly throughout. Marking the third part in the ongoing Charlie Fox series, it really shows her at her best I felt, showing what these stories are actually made of.

Best Authors To Read If You Like Zoë Sharp:

Karin Slaughter: The American crime writer Karin Slaughter is a great choice for anyone looking for intriguing and immersive mystery thrillers. She’s very much a veteran of the genre, really pushing it to the limit, having been published worldwide to international acclaim. Particularly well known for her Will Trent novels following the eponymous special agent, she fully understands what it is that keeps her readers coming back for more.

Lee Child: For many the British writer James Dover Grant, aka Lee Child, needs no introduction, as he’s written the Jack Reacher novels for some time now. A skilled author when it comes to both action and suspense, his ongoing franchise is hugely popular with readers from all over. Set in America, the series itself follows the former military police officer Jack Reacher, as he undertakes various different missions and assignments across the United States.

Vince Flynn: Writing his stories following the assassin Mitch Rapp, American author Vince Flynn would create a number of action thriller novels during his lifetime. Later his Mitch Rapp series would also go on to become a film, along with the franchise itself being continued by fellow American writer Kyle Mills. His work definitely left a mark, one that continues to live on today, as I continually find myself returning to this particular series.

Stella Rimington: Previously working as the Director General of the MI5, it stands to reason that British writer Stella Rimington would bring a certain level of authenticity to her work. It’s clearly a world she knows well, writing about the intelligence services quite unlike any other writer currently out there today. Largely known for her Liz Carlyle series following a young MI5 intelligence officer, she produces mysteries and thrillers around the character in her ongoing suspense fueled franchise.

Brad Thor: Perhaps most notable for his high-concept and equally high action Scot Harvath collection of novels, the American author Brad Thor really knows how to turn up the tension. He takes a straight-forward premise and brings it to boiling point, excelling in both drama and suspense, really making the most of his material. The character of Scot Harvath himself is an ex-Navy SEAL, working undercover as a counter-terrorism agent, ensuring justice is done wherever he sees fit.

Public Display of Imagination – Zoë Sharp: Talking about her novel ‘Bones In The River’, Zoë Sharp breaks down the novel. Looking at her life up to that point, it’s an in-depth look into her career.

Second Sunday Books – Zoë Sharp: This time Zoë Sharp talks about her novel ‘Bad Turn’, looking at what went into the book. It’s also an interesting and informative analysis of where she gets her inspiration from.

The Crime Cafe – Zoë Sharp: This is a brief interview with Sharp, offering another light-hearted look into her world. Fun and entertaining, it’s definitely a must for any fans of her as an author.

Thanks so much, Janise! It was lovely to learn how much you’ve been enjoying the books, both Charlie Fox and the newer Lakes series. You’ve made my day :))

You made my day by taking the time comment! I truly appreciate that thank you sooooo much Zoe. keep up the incredible work 🙂 🙂 🙂