In this article I am going to be covering the best sci-fi books that were published in 2019.

So if there is a book you are mad that I included on this list, or are upset that a book didn’t make the cut please know that this is a personalized list, and that it’s just based on my own preferences.

To compile a shortlist, I go through the best selling sci-fi books each month and read them. I also pick up recommendations along the way and read them. Then when websites such as Goodreads do their end of the year awards I look through those lists too. If there are any books that I have missed I make sure to read them.

As I read the books I keep a temporary grading system going on. That’s not set in stone but I use that as a loose base. Then I think back to what books out of them all were the most memorable etc. 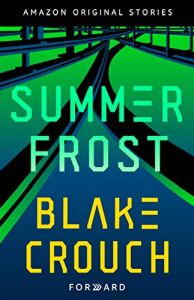 Initially I wasn’t going to include this collection. It’s 6 short stories and a couple of them are very short. It just felt like something that belonged in the “honorable mentions” section.

However the more I thought about it, the more I realized it belonged here simply because this IS my personal opinion and out of all of the science fiction books I read this year, this entire collection was one of the most memorable. I’ve actually went back and read some of the short stories multiple times. I’ve even downloaded it all onto one of my spare Kindles and given it to friends just so they can read them as I enjoyed it that much. I’d be doing it a disservice if I didn’t list it among the best science fiction books of the year.

You have Andy Weir and a story about a foolproof quantum computer system in Las Vegas. Veronica Roth and her story of scientists gathering plant samples a couple of weeks before Earth is turned to dust. Blake Crouch with the best story of all – a story about an NPC from a video game who actually starts thinking! NK Jemisin with a fantastic story about an explorer returning to a climate-ravaged Earth only to realize things aren’t as they seem. Paul Tremblay with a chilling story about waking up in a room with no idea who you are. And Amor Towles with a story about a fertility lab where you can map out your entire childrens future.

The Towles, Jemisin and Crouch stories alone were incredible. If you’ve never read this collection, please do! A nice and easy read and something that serves as a great talking point with people. 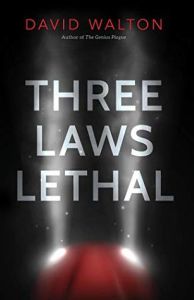 I’m a big fan of AI and especially when they use realistic situations so I really enjoyed this one and it had to make my list. It’s about self-driving cars that make life and death choices and takes place in a futuristic New York City.

There is a group of four friends whose ambition is to start a taxi service which uses a fleet of the AI cars. They make it happen. However evreything changes when the project leader Brandons girlfriend is killed, and he blames the programmer. They go their separate ways but it becomes a competition.

I always find it difficult describing books without spoiling them however this was one that I really enjoyed and the perspectives on artificial intelligence are really neat. It’s also a great book in the sense that it’s an easy read and with great characters that get you hooked immediately. It hits all the emotions etc. One of my favourite sci-fi books of the year. 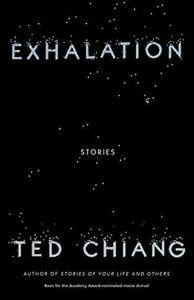 These were excellent. Ted is such a unique author and I was so excited to read this. I read through it so fast and it’s one I’ll have to go back and read soon. Some of the stories had been previously published but there was a couple of new ones too. What I really like about them is the originality of them. I am a fan of stories that tough on AI and The Lifecycle of Software Objects was an excellent one.

Short stories are tough to write about because you don’t want to say too much as it’s easy to spoil. It was fun going into them not knowing what they were about. Anxiety is the DIzziness of Freedom was on excellent one about a world that is similar to ours, except there are prisms where people can communicate with their parallel selves in a different dimension. So much to this one. Loved most of them. Even the ones that I didn’t really enjoy they were still neat to think about. 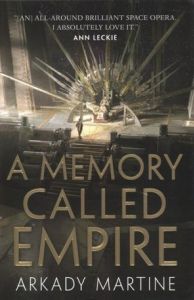 See at Amazon #2: A Memory Called Empire by Arkady Martine.

This is the first book in the Teixcalaan series and it’s the type of book where you just can’t wait for a sequel. If anything you’re sad that you got in on the ground floor because you have to wait until Arkady releases the next book!

Ambassador Mahit Dzmare finds out that their predecessor has died and that they may be the next to die. They have to find out who was behind the murder while battling other issues and trying to navigate an alien culture.

The book does a great job at world-building for future novels. It is a bit slow to start but well worth it once you get invested in the characters. It’s a bit book too as it’s set in a world where the majority of the characters are gay and THAT is the norm as opposed to being straight. A neat decision. It’s slow but it pays off in the end. 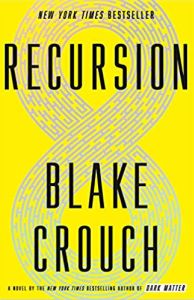 Blake is probably my favourite sci-fi author. He writes those sort of books that are the perfect cross between sci-fi and thriller, and always leave you both scratching your head and also satisifed. He also writes the type of book that are good to TALK about and that’s what I love!

This and Dark Matter were two such books. Books that I would read and my girlfriends would read at the same time then we’d all get together over some wine and burn the midnight oil just talking about it.

A Neuroscientist works on a machine which will preserve memories. She is motivated by her mother who has Alzheimers. She wants people to be able to relive their memories again. However then these people keep popping up who experience something called False Memory Syndrome – basically they start experiencing memories that never happened – their child dying, things like that. A police officer, Barry Sutton, investigates and then he gets dragged into it, sent back in time to make a life-altering decision.

This book just blew my mind. If you’re not big into sci-fi that doesn’t matter; Blake is able to tell it in such a clever way. This was for me the best sci-fi book of 2019.

Machines Like Me by Ian McEwan: This received a fair amount of votes in the Goodreads choice awards. With it involving robotic humans I thought it might be cool. It just felt it was trying to accomplish too much with the storyline, a romance in there, mystery, historical…just too many layers.

Fall, or Dodge in Heel by Neal Stephenson: What the heck happened Neal? My gosh I was excited for this one and my gosh was I disappointed. I’d never do a “worst” books section but in regards to disappointments this one was right up there.

The City in the Middle of the Night by Charlie Jane Anders: I still don’t really “get” this book. It was an interesting idea but there didn’t seem to be a main purpose to it if that makes sense.

Children of Ruin by Adrian Tchaikovsky: The 2nd book in the Children of Time series. Maybe I am comparing it more to the first one? But I didn’t enjoy it as much.

The Test by Sylvain Neuvel: This was one of those where the little book preview had me so excited as it was so mysterious. 25 questions to determine their fate and 25 chances to impress. It’s only a novella so it is an easy read. I saw a lot of people comparing it to a Black Mirror episode and that makes sense. Anyway it’s very interesting and thought provoking and worth the read.

The Testaments by Margaret Atwood: You tried Margaret and I’ll give you lots of credit for following up The Handmaids Tale. However the fact that this won the Goodreads Choice Award for Fiction sums up Goodreads voters as a whole in my opinion. It’s more about the name of the author than anything else.