Douglas Adams was one of the most beloved English authors of all-time. He is the author of The Hitchhiker’s Guide to the Galaxy which was extended into a five book “trilogy”. To date, the books have sold more than fifteen million copies and the original book has been adapted for film, comic books, television, and the stage.

Adams typically wrote in his unique genre of science-fiction comedy. In addition to the Hitchhiker’s series, he also wrote Dir Gently’s Holistic Detective Agency and it’s sequel which was also adapted into a television show.

The Hitchhiker’s Guide to the Galaxy was his first book, but it was originally conceived as a radio series. It was a story that was always evolving from the radio to television to the book with changes made along the way. Adams began work on turning the book in the film starting in 1980, but the book wasn’t adapted into a film until 2005. Sadly, this was after Douglas Adams passed away.

In addition to his work as an author, Adams is also well known for writing a sketch on Monty Python’s Flying Circus and for writing three Doctor Who serials.

Adams died in 2001 at the age of 49 due to a heart attack. His fans organised a tribute known as Towel Day two weeks after Adams’s death, which has been observed every year since then.

He was married to Jane Belson in 1991 and the two lived together until his death. Adams had one daughter, Polly Jane Rocket Adams. 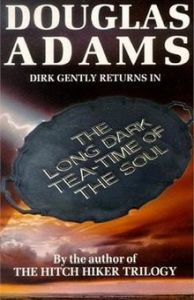 This is the second appearance of Dirk Gently, holistic detective in Douglas Adam’s work. This book starts with a check-in desk at London’s Heathrow Airport bursting into flames and disappearing. Everyone thinks that this is an act of God, but what God? That’s the kind of thing that drives Dirk Gently and why he makes this his next case. While Gently’s latest client has been murdered and his cleaning lady is fighting with him over his dirty refrigerator, Gently will do his best to connect all these events and solve the case.

This book is a great example of Adams at his best. The story is completely ridiculous while also being grounded in reality. Every little detail in this clever story manages to come back into itself. Adams was a great observer of the human condition and he manages to talk about it with great humor in this unique story. 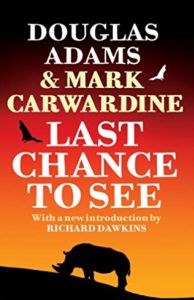 This book is quite unlike anything else that Adams has written as he teams up with a zoologist named Mark Carwardine to travel around the world in search of exotic creatures. The two encounter many wild animals in this one, from the Kakapo of New Zealand to the white rhinos of Zaire, and tell readers about their magnificence in ways that are equal parts funny and moving.

Adams had an interest for environmentalism during his career and this is a really entertaining memoirt that doubles as a fun guide to conservation and biology. He manages to document conservation efforts by dedicated people while keeping the story humorous and captivating. Unlike anything that Adams ever wrote, it’s a shame that he died so young and we missed seeing more of this side of him in publication. 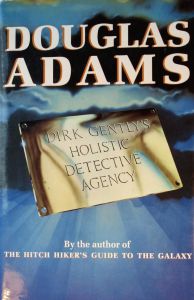 Dirk Gently is a unique private investigator who is trying to prove the fundamental interconnectedness of all things by trying to solve multiple mysteries at once while also eating a lot of pizza. In addition to all of this, he might just save the human race from extinction as well. There is no detective quite like Dirk Gently who proves it over and over in this one.

This book shares a lot of the absurdist British humor that people love about The Hitchhiker’s Guide to the Galaxy, but takes it to some crazier genre-bending places. This book tackles everything from the supernatural to science fiction to detective mysteries in a unique, absurd way. 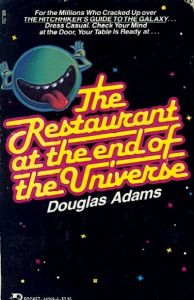 The second book in the Hitchhiker’s saga focusus much more on fan favorites Ford Prefect and Zaphod Beeblebrox than the first book which makes it a favorite among many. In this one, the characters don’t just travel the universe but also dabble in a bit of time travel as well. The crew is on a quest to meet the person who runs the universe with a trip to prehistoric Earth along the way.

If you’ve read the first one, you know what you are getting with this one. It pick up right where the previous book leaves off so don’t bother reading it unless you have read the first as it is a true sequel in that way. 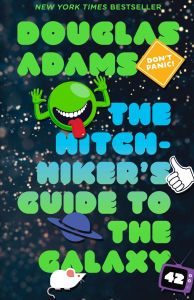 The book that started it all starts off with Arthur Dent being saved by his friend Ford Prefect, secondsb efore the Earth is demoished to make way for a galactic freeway. Arthur doesn’t know that his friend Ford is actually from outer space and the two end up on a stolen spaceship with the Zaphod Beeblebrox, the president of the galaxy, and Trillian, an Earth woman who Arthur once tried to pick up at a cocktail party. The four of them find themselves on the search for the answer to the ultimate question with a depressed robot by their side and an army of Vogons on their tail.

Adam’s first book is witty, complex, and accessible all at the same time. It has some absolute laugh out loud moments packed throughout and is one of the more re-readable books in existence. This is book somehow manages to be an intricate story while also being easy to read. It manages to address philosophical questions while also being hilarious. A fantastic read and a testament to the talents of Adams.

Best Authors To Read If You Like Douglas Adams:

Terry Pratchett: Best known for his Discworld series, Terry Pratchett is another humorous English writer who dabbles in science-fiction and fantasy. Much like Adams, his style is wholly unique to him and nobody writes a book quite like Pratchett. He is perhaps best known to contemporary audience for his collaboration with Neil Gaiman, Good Omens. That book was turned into a hit television show by Amazon.

Neil Gaiman: While Gaiman’s work is often more serious than Adams, you can see the influence of Adams throughout his work. This is on display with the world-building and humor of Stardust. Or in Gaiman’s own tribute book to Adams, Don’t Panic: Doulgas Adams & The Hitchhiker’s Guide to the Galxy. That book not only tells all about Adams and his most famous series, but is also rather hilarious in it’s own right.

Andy Weir: Andy Weir was a software engineer and devoted to things like relativistic psychics and orbital mechanics before becoming a writer. It was those loves though that made The Martian such a great read from a scientific perspective. However, it was the Adams-esque humor that made this book something special.

Eoin Colfer: Best known for writing the Artemis Fowl series of books, Colfer was chosen to continue the Hitchhiker’s saga with …And Another Thing. While he isn’t Douglas Adams, he doesn’t try to either and just does his best to take good care of the characters.

Terry Jones: Terry Jones was a member of the Monty Python comedy team who adapted one of Douglas Adams’ stories to make Starship Titanic into a book. The original Starship Titanic was a CD-ROM computer game created by Adams that Jones made into a novel.

Don’t Panic! It’s The Douglas Adams Papers: This podcast sees John Lloyd digging deep into the story of The Hitchhiker’s Guide to the Galaxy by digging into some of Adams own private papers.

Beware of the Leopard: the Hitchhiker’s Guide to the Galaxy podcast: The most comprehensive podcast about the Hitchhiker’s series out there as they cover the radio, TV, book and film incarnations of Douglas Adams’ classic series in alphabetical order, from Arthur to Zaphod.

Electric Monks: A Dirk Gently Podcast: Hosted by four fans of Adams from all corners of the globe, Electric Monks is a podcast devoted to Douglas’ Adams lesser known franchise.