Changing the face of fantasy literature forever, British writer and humorist Terry Pratchett would come to be regarded as a literary institution during his lifetime. Best known for his Discworld series of novels, he’d take the genre of fantasy and turn it on its head, using its many well worn tropes and cliches in a fun and knowing manner. Not just settling for a post-modern parody of the format though, he’d take it into new and previously unexplored territory, using it as satire to reflect the modern absurdities of real-life. This would prove to be hugely successful over the course of his long and illustrious career, selling over eighty-five million books and counting across thirty-seven languages worldwide. He would also come to be a pioneer in many different fields, including films and video-games, often creating his own content for the latter, favouring games with ‘depth’, such as ‘Skyrim’ and ‘Oblivion’, which he’d create his own content for.

Starting out with the comic fantasy novel The Carpet People published in 1971, Pratchett would set the template for a lot of what was to come. He’d later rewrite this book, re-releasing it in 1992, stating that it was ‘two authors’, both being him at different stages in his life. It was in 1983, though, that he would have a major impact on the fantasy scene with his novel The Colour of Magic, it being the first in his much loved Discworld series. Setting the stories in a fictional universe called ‘Discworld’, they’d take place on a disc shaped flat-earth that sits on top of four giant elephants, which, in turn, stand atop an even larger turtle flying through the cosmos. Within this series there’d be plenty of recurring characters, such as Death, who is earlier introduced in 1987’s Mort, which sees Mort as Death’s apprentice. The series breaks off into other narratives and arcs, all of which take place in the same universe, and there’s been numerous adaptations, including video-games. Alongside all of this he’s also produced subsequent stand-alone series and novels, for both Young Adults and children too, including his equally revered Johnny Maxwell trilogy, beginning with Only You Can Save Mankind in 1992.

Recently the work of Terry Pratchett was adapted for a television, with his 1990 novel Good Omens, which he wrote in collaboration with Neil Gaiman, being made for Amazon Prime. With the rights to his Discworld series having been sold, there have been many films proposed over the years, with various directors, such as Terry Gilliam, attached, although nothing concrete as of yet. There’s been many television adaptations produced though, including Hogfather made from his 1996 novel, starring David Jason in 2006. Winning numerous awards over the course of his life, most notable of which was his knighthood received in 2009 for ‘services to literature’ making him Sir Terry Pratchett, there are countless highlights spanning across his extensive backlog of work.

From his many books, these are my own personal top five Terry Pratchett novels: 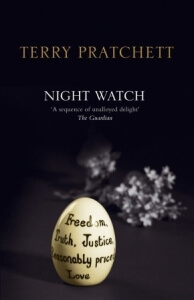 Set precariously on a precipice, the city is balancing on the edge of chaos, with outright revolution set to come at any moment. Not only that, but there’s a serial-killer on the loose who’s targeting the police, all whilst the people are rising up against the powers that be. One question everyone must ask themselves now is, whose side are they on when the tables finally turn and the streets are filled with violence?

The sixth title in the ‘City Watch’ arc, and the twenty-ninth book in the Discworld series overall, this is a great addition to the franchise. Looking at ideas of leadership, revolution, and what identity within all this means, this is a somewhat moodier instalment to the series, whilst remaining true to the originals. Saying exactly what it is that he wants to say, Pratchett is clear and articulate in his intended message here, making a lasting impact upon the reader. 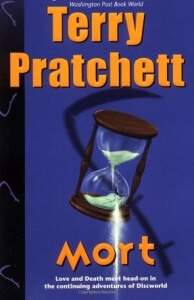 Approached by none other than Death himself, Mort is offered the position of becoming his new apprentice, which seems to be a job that’s everything he could’ve hoped for. Given free board in Death’s mansion, the company house is open to him, whilst he can remain alive and family funerals aren’t a problem. There is one issue though, and that’s his love life, as he finds that his ideal job may get in the way of any potential romances blossoming.

Marking the opening of the ‘Death’ series of Discworld novels, this would introduce the character of Mort for the first time. His character is well established here, coming across as grounded and down-to-earth, despite him being the apprentice to the equally likeable Death. As with most Discworld novels too, there are plenty of funny jokes, couched in amongst a number of larger ideas that stay with the reader long after they’ve put the book down. 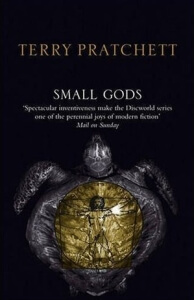 All across Discworld there are countless gods, all coming in a multitude of different shapes and sizes, making themselves heard however they can. With so many to choose from the market has never been more competitive, which is causing trouble for the Great God Om who’s been reduced to appearing as a tortoise. Not having any followers, he needs an acolyte quick, as a god is only as big as its belief, and it appears that he may have finally found one with Brutha.

Exploring a number of major themes and ideas, this looks at the concept of belief and worship, covering a lot of interesting ground in the process. The relationship and dynamic of Om and Brutha is also extremely well done, with some great moments between them both. It’s a highly imaginative and innovative story that really draws you in, holding you there for the duration of the novel. 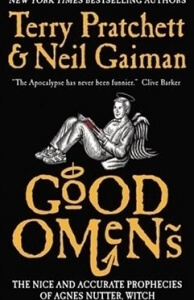 Everything seems to be following the Devine Plan as the prophecy stated, with Atlantis rising from the sea, frogs falling from the sky, and the armies of Good and Evil growing. There are two beings who are not so keen on the idea though, one being an angel and the other a demon, who’ve slowly become accustomed to life on Earth since The Beginning. It also appears that the Antichrist has disappeared, with him being the one that will set the events in motion and bring about the end.

Genuinely funny with a warm heart, this book hits all the right notes with it targets, making for a highly entertaining read. The characters stick with you, such as Aziraphale the angel and Crowley the demon, who’s gradual friendship really brings the story forwards. With plenty of big ideas too, it expands upon some grand concepts, making them accessible in a witty and compelling manner. 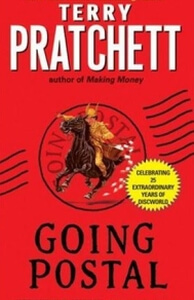 The con-man and confidence trickster Moist Van Lipwig has found himself on the end of the hangman’s rope, but it isn’t death on the other side of the trapdoor beneath him. Offered a job as postmaster by Lord Vetinari, the ruler of the city-state of Ankh Morpork, he doesn’t have much of a choice given the circumstances. Getting the Postal Service back on its feet isn’t going to be easy for him, especially now that it’s fallen into decay, as it appears he has his work cut out for him.

This is one that I felt struck the perfect balance between humour and light-hearted irreverence, while saying something deeper with satire. Taking the Discworld series into different areas, Pratchett was never afraid to try new things, something which is clearly evident here. Moving the world forwards, he says something different, that’s altogether funny, compelling, and compassionate in equal measure.

Best Authors To Read If You Like Terry Pratchett:

Neil Gaiman: Having both worked together on ‘Good Omens’, the two writers shared similar sensibilities that would perfectly compliment one another. Largely writing modern fantasy stories with a Gothic edge, Gaiman focuses on setting his novels in more realistic and grounded settings. Imaginative and innovative with something to say, he creates strong characters that have a lasting effect on the reader, with many of his books being adapted for both film and television as well.

Douglas Adams: Doing for science-fiction what Terry Pratchett did for fantasy, fellow British writer Douglas Adams would establish his own fictional universe. Often conveying huge philosophical concepts through humour, he’d tackle some of the larger questions in series such as ‘Hitch Hiker’s Guide to the Galaxy’ and ‘Dirk Gently’. Adapted for film, television, radio and video-game on multiple occasion, he was a key figure in shifting genre fiction, writing in a fun and entertaining manner.

Ursula K. Le Guin: American author Ursula Kroeber Le Guin was well known for her highly innovative and imaginative brand of science-fiction. Taking the genre in new and creative directions, she well known for her Earthsea novels, as well as her Hainish Cycle stories. These would establish her as a highly popular name creating entire worlds, with her progressive themes and ideas throughout, going on to inspire countless readers and writers worldwide.

Philip Pullman: A bestselling British author, Philip Pullman has made a name for himself as a writer of vast and expansive children’s fantasy novels. Taking a lot of different ideas, philosophies and concepts and placing them into his worlds, he’s essentially created his own mythos. While he’s somewhat more serious than Pratchett in tone, his work still makes a forceful impact, with series like ‘His Dark Materials’ standing the test of time to this day.

Diana Wynne Jones: Inspiring many authors, including Philip Pullman, Neil Gaiman and Terry Pratchett himself, British fantasy author Diana Wynne Jones was a pioneer in the genre. Combining fantasy and science-fiction, she included a number of different elements in her work, such as multiple universes and time travel. Bringing in a sense of realism too, she would create her own style, with a Studio Ghibli adaptation of her novel ‘Howls Moving Castle’ being released in 2004.

The Medieval Gnome – The Discworld Portal: This is a Discworld based podcast by fans for fans. Covering all aspects of the world, each episode examines a different topic, from the lore to the characters, in bite-size easily manageable chunks.

Desert Island Discs – Terry Pratchett: Speaking to Terry Pratchett himself, he goes over the music that inspired him. Enlightening, it’s definitely an interesting interview for those hoping to discover what drove him as an author.

Bookclub – Terry Pratchett: Interviewing Terry Pratchett on his novel Mort, this looks at what goes into his work as an author. It’s an illuminating show with many insights for both fans and general readers alike.