A leading proponent of epic Young Adult fantasy novels, Brandon Sanderson is known for creating sagas that span over numerous series. Often writing speculative science-fiction, his characters are usually seen embarking on journeys, something which is fairly standard to the genre on the surface. It’s what he does with this trope that’s different, though, as he builds entire worlds with their own systems and lore. Working alongside other well-known American fantasy novelists, he’s an established novelist in his own right. This has included continuing the franchises of other writers in their passing, with him completing Robert Jordan’s well ‘Wheel of Time’ series of novels.

Beginning in 2005, Sanderson would start his career back in 2005 with the Cosmere series, starting with Elantris. One of the main ideas behind this shared universe was the idea of connecting them all but not requiring readers to read them, making for individual epics that stand can stand on their own.

He’s also created graphic novels set in the same world, with White Sand being published back in 2016. When it came to finishing the Wheel of Time series, he’d start with The Gathering Storm in 2009, followed by two subsequent titles; Towers of Midnight and A Memory of Light. Known for creating his own systems of magic, he’s popularized the concept of hard and soft magic, with ‘hard’ being used to determine magic rules being set in stone and ‘soft’ being magic systems being more about wonder. He’s also well known for teaching this, among many other concepts, through his well-regarded creative-writing lectures, along with ‘Writing Excuses,’ his weekly writing podcast.

Sanderson is also well known for working with other pre-existing fantasy franchises and intellectual properties for larger companies. Included in this is his work on the ‘Infinity Blade’ series, beginning with Infinity Blade: Awakening in 2011 for Epic Games. It was also likely this work that would lead to his later collaboration on their ever-popular video-game Fortnite, managing a crossover with his own ‘Mistborn’ series, which started up back in 2006 with The Final Empire.

From creating ‘Sanderson’s Laws of Magic’ to winning countless awards, including the Goodreads and Whitney Awards on numerous occasions, he’s extremely well regarded throughout the fantasy community at large. His Cosmere novels have also been licensed to DMG Entertainment, which will see big-screen adaptations over the years to come. There’s plenty of career highlights throughout his backlog of work, though, with many titles standing out from the rest.

Here are my own top five Brandon Sanderson novels ranked in order: 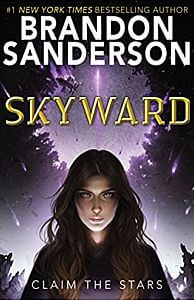 Trapped upon a planet that’s constantly under attack from alien invaders, the remnants of humanity hold out against the enemy. Among them is the young teenage girl Spensa, as she decides she wants to become a pilot herself and defend her planet. Finding a spacecraft, she repairs it, all the while hoping to get into flight school, as she finds that the craft actually has a soul of its own, allowing her to communicate with it.

Setting up the ‘Skyward’ series, this is a great opener that contains all the hallmarks of another classic saga from Sanderson. Establishing the world and introducing the characters, it’s ideal for anyone looking to get into the author, as it easily leaves the reader wanting more. The story sticks in the mind, making for a truly memorable experience that fully explores this exciting and rich new world. 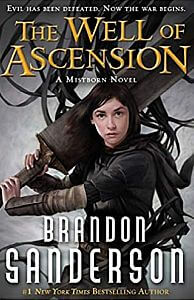 Having slain The Lord Ruler ending his thousand-year reign, the former street urchin Vin is now married to her love, the nobleman, as she’s the most powerful Mistborn in the kingdom. With her mentor Kelsier now dead, Vin is dealing with the risk of a religion surrounding her name, something that makes her feel uneasy. Accompanied by her crew, who aided her through the revolution, they must now work together to ensure that the kingdom remains safe, as they learn a whole new set of political skills.

This book had the incredibly difficult task of following in the footsteps of the first Mistborn novel, this being the second in ‘The Mistborn Saga.’ More than stepping up to the challenge, though, this story really delivers, creating a lot of tension for the characters that readers have now come to know and love. As an expert piece of world-building, too, it’s definitely effective, building on the rich, evocative atmosphere that came before. 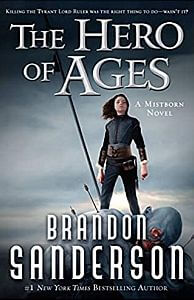 Now a Mistborn himself, the Emperor Elend Venture has to unpack the clues that have been left behind by Lor Ruler, potentially allowing him to save the world. Meanwhile, Vin has released the Ruin, a mystic force she was duped into releasing from the Well, leaving her feeling guilt-ridden. The ability that Ruin has of reshaping reality has led Vin incapable of discussing it with Elend, meaning its omniscience nigh on impossible to defeat.

The third and final book in ‘The Mistborn Saga’ collection of novels, this does a perfect job of wrapping the series up. What makes these books so uniquely special is how difficult they are to put down, making for a compelling set of stories. Building upon the overall world as well, Sanderson really is a professional when it comes to providing further lore, giving long-term fans something to appreciate here too. 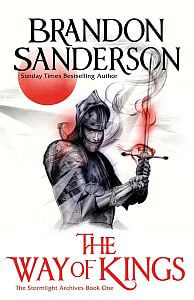 A storm-ridden world, Roshar is an unforgiving terrain with cities providing shelter, and it is here that men will do anything for Shardblades; armor and swords that renders the user nigh on invincible. Originally used by the now fallen Knights Radiant, war now rages across the Shattered Plains for them, and it is here that Kaladin has traded in his apprenticeship for a spear to protect his brother. Now reduced to slavery, he fights within ten armies, as Brightlord Dalinar Kholin leads one of them who is fascinated by the ancient text ‘The Way of the Kings,’ much like his late brother the king.

Establishing an exciting new world to explore, this is Sanderson doing what he does best, casting a new set of characters to follow. The first in ‘The Stormlight Archive’ collection of novels, this manages to incorporate a wide range of different themes and ideas. Embarking on an epic journey with the protagonists, it’s a great example of the high-fantasy genre in action, too, really making room for imagination and creativity. 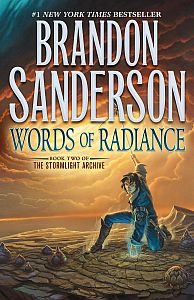 Now in command of the royal bodyguards, Kaladin has defied all odds and remained alive, and he must protect the king from the new threat of an assassin. Murdering rulers across the land, Szeth is the assassin with magical powers, and it appears that his master has deeper motives beyond the confines of the war. Meanwhile, Shallan journeys along her own path, as she aims to stop the Voidbringers from returning, and the secrets she requires are located in the Shattered Plains.

The second book in ‘The Stormlight Archive’ series, this continues with much the same passion as the previous novel, taking it up a level in the process. There’s plenty to love here, as Sanderson really pushes the concept and the world to its full potential, making the most out of every little detail. Developing a very real bond with each of the characters, too, it’s definitely a novel for fans of both Sanderson and the fantasy genre as a whole, getting to the heart of what really drives him as an an author.

Best Authors To Read If You Like Brandon Sanderson:

Robert Jordan: With a strong connection to the work of the iconic fantasy writer Robert Jordan, Brandon Sanderson would continue his ‘Wheel of Time’ series after his passing. His real name was James Oliver Rigney Jr., but it was under his Jordan pen-name that he’d write most of his epic and high fantasy novels. He was also well regarded for his spin on the already well-established ‘Conan the Barbarian’ series of fantasy novels.

Brian McClellan: A close associate and friend of Sanderson, the epic fantasy writer Brian McCellan has published a number of well-regarded trilogies. Winning numerous awards for his writing, too, he’s a gifted writer, coming from the same school as Sanderson. Both of them would learn their craft together, and McCellan has a lot of strong ideas that really stand out, making his mark on the fantasy genre.

Kristin Cashore: A Young Adult fantasy novelist, Kristin Cashore is a writer who understands not just the genre but her readers perfectly. This is something that she shares with Sanderson in that her writing is extremely accessible and easy to get into. There are subtle layers of meaning underneath, though, as she pushes the format to its full potential, really making the most of it.

Frank Herbert: For many, Frank Herbert is a science-fiction writer who needs no introduction, having produced the ‘Dune’ saga to much acclaim. With cult films adapted from the book, too, he’s a highly regarded and influential author, leaving behind a legacy that’s still felt to this day. Sharing with Sanderson a love of world-building, his attention to detail is second to none, as he fully immerses his readers within his rich and expansive universes.

Megan Whalen Turner: Writing fantasy for the Young Adult demographic, Megan Whalen Turner is a versatile and gifted novelist. Bringing elements of horror into her work, too, she’s won numerous awards for her stories, becoming a unique voice within the industry. Similar to Sanderson, her stories are regarded for their sheer sense of scope and scale, drawing from a wide range of different influences and inspirations.