Largely writing espionage and thriller novels, the American author Daniel Silva comes from a background in the media, having previously worked as an executive producer for CNN. Also working as a journalist prior to taking up writing fiction full-time, he got an inside and in-depth look into the world of politics. This has helped to see him become a household name for many, with his authentic style feeling wholly real and rooted firmly in the realms of reality. Mainly known for his Gabriel Allon books, which feature the eponymous Israeli art restorer and spy assassin, as he neutralizes various threats in his quest for justice in a fractured world.

Writing his first novel in 1996, Daniel Silva would make his debut with the stand-alone espionage thriller The Unlikely Spy. This would set the tone for his literary career to follow, although it would be his only solo story outside of his two series. Publishing The Mark of the Assassin in 1998, he wrote the first of the Michael Osborne Novels, with the second, The Marching Season, coming out in 1999. Next he would bring out his Gabriel Allon books, the first one being The Kill Artist, in 2000, and he’s focused solely on these ever since. These have since seen him become a worldwide bestselling sensation and popular household name, as his novels have been translated into a total of twenty-five languages.

With a heavy dose of geopolitics as the background to most of his stories and thrillers, Silva really manages to keep the pace of his novels consistent throughout. His 2005 Gabriel Allon book The Messenger has had the film adaptation rights running through various different Hollywood deals, with Silva wanting to make sure that he gets to see the best job possible. Researching his novels extensively, Silva brings a high-degree of authenticity to each and every one of his novels that really helps to create an immersive experience. In 2007 he would receive the Barry Award for The Messenger, and again in 2013 for The Fallen Angel, as he’s published numerous highlights throughout his career.

For Daniel Silva, these are my own personal favorites from his career ranked in order of his top five titles: 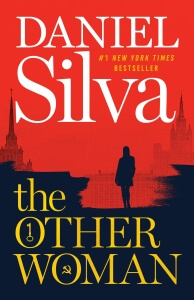 Hidden within a remote village out in the Andalusian mountains, a woman begins to write her memoir; dangerously recounting the secrets of the Kremlin. With an individual standing at the doors to power in the West, they’ve been inserted by the KGB long ago, and now it’s up to Israeli secret intelligence agent Gabriel Allon to unravel the conspiracy. Facing off against the Russians, Gabriel must now find the traitor, as he’s in a race against time to get to the truth, in a showstopping climax outside of Washington upon the Potomac River’s banks.

This really did the job for me when reading it, as it’s a straight-forward, nuts-and-bolts thriller that does exactly what it sets out to do. Gabriel Allon is a strong character, and this book definitely does him justice as the no-nonsense hero looking to serve a strong dose of justice. It’s fast paced and action packed, whilst knowing exactly when to reign it in, expertly letting the tension and character build. 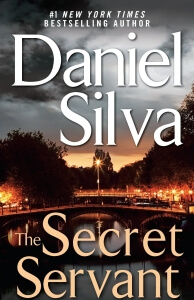 The Israeli secret intelligence agent Gabriel Allon is up against the clock this time, as he races to find a kidnapped woman amidst a London terrorist plot. Heading to Amsterdam as part of his assignment, it seems he only has to clean out the archives of a recently murdered Dutch terrorism analyst and Israeli intelligence asset. Things take a turn, though, as Allon discovers a terrorist plot taking place in London, and he must travel there to stop it taking place.

This fulfills all the beats of a typical thriller and it does it well, knowing how to have fun with the genre making the most of it. The espionage aspect is extremely exciting, as it manages to keep you guessing, never really knowing just what’s coming around the corner. Taking a balanced look at the various issues surrounding terrorism too, it’s a nuanced take, making it still relevant and interesting today. 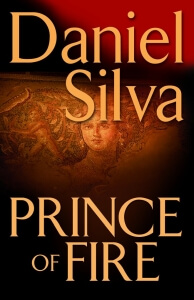 Gabriel Allon is once again back in the city of Venice, and this time he learns of a dossier that could potentially expose his own secrets, laying them out bare. That’s when he’s called back to Israel, as he must track down a master terrorist, all whilst the the dossier lies in terrorist hands. The lines become blurred though, as it appears that Allon is heading towards a showdown, one where he’s unsure who’s tracking who, not knowing whose secrets are going to be revealed.

The amount of surprises this sprung upon me was hugely enjoyable, as there was a constant twist and turn upon every page. Filled with excitement, it managed to keep me continually hooked throughout, never able to put the book down. With an intricately interwoven narrative, it definitely pushes the character of Allon to his limit once more, in what is the fifth book in the series. 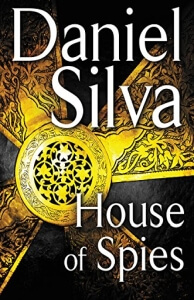 It’s been just four months since there was a terrorist attack on American soil, and there’s been another attack, this time on London’s West End. There’s just one loose thread after the attack though, and it’s with this that Gabriel Allon embarks on his assignment as he heads off to the south of France. Here he meets Jean-Luc Martel who has acquired his huge wealth through drug dealing, whilst his wife, the model Olivia Watson, turns a blind eye, but soon they must face the truth to the fact that Martel has been dealing with a terrorist.

The story has a rich ambiance with a seductive air about it, as it conjures up images of Casablanca, giving it a sensuous tactile quality. In the seventeenth book in the series, it manages to draw on a number of inspirations, with its well plotted spy thriller drama building the suspense. Allowing the tension to develop, it makes for an extremely entertaining and compelling read packed with action on every page. 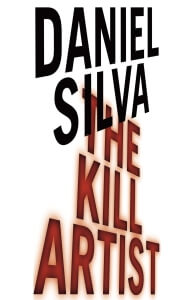 Defending Israel from external threats, Gabriel Allon was one of their best operatives, that was until he quit to focus on his family and work in art restoration. Now he’s being called back in by Ari Shamron, the head of Israeli intelligence, in order to oversee a Middle Eastern peace deal that’s being threatened by a zealot. Facing off against the individual, he must deal with his attempts to thwart the deal, and help bring order to the region.

This was the book where Gabriel Allon was introduced for the first time, as we find him having initially retired from his life in Israeli intelligence. Using the many conventions of the genre to create an effective and original thriller, it’s easy to see how the work of Silva became so popular. Setting up the character with expert precision, it’s a fun ride as you see him coming into the role that so many readers know and love him for today.

Best Authors To Read If You Like Daniel Silva:

Vince Flynn: Mainly known for writing his Mitch Rapp novels, Vince Flynn was a highly popular writer during his lifetime. The stories would follow the lethal assassin who would do whatever it took to get the job done, with geopolitics incorporated into its world much like Silva. There would also be a film made from the series, with Flynn’s extremely visual and vivid style of writing being fast paced throughout.

Gayle Lynds Known for continuing the ‘Covert-One’ novels started by fellow thriller writer Robert Ludlum, Lynds has an extremely arresting style that immediately engages the reader. She’s also highly regarded for her own stand-alone thrillers, along with her Young Adult novels, all of which have been very successful too. This has led to some of her work being adapted for television, making her an international household name for many in the world of thrillers.

John Altman The American thriller author John Altman writes with a sense of immediacy that instantly hits you from the page. Writing with confidence, he manages to grab your attention straight away and not let go, with the high-octane action running constantly. A true master of suspense, he’s great at firing up all the senses, injecting a pure sense of adrenaline into his thrilling and exciting narratives.

John Lescroart Well known for his crime and thriller novels, John Lescroart has maintained a strong profile for quite some time now as an American author. Writing over twenty novels so far and counting, he’s also notable for being a screenwriter as well, with numerous awards and honors to his name. Creating a number of long-running series too, he’s managed to establish many highly popular franchises, as his audience continues to grow.

Jamie Freveletti Focusing on the thriller genre as well, Jamie Freveletti is also known for her work on the Covert-One series alongside Robert Ludlum. Her work is engaging and entertaining, with her stories moving at fast pace, whilst allowing the reader to catch-up at the same time. This has proven to be highly successful for her as, along with her much loved Emma Caldridge series, she’s internationally renowned worldwide.

The B&N Podcast – Daniel Silva: Talking about his many inspirations, Silva here goes into detail on his love of the espionage genre. Giving an insight into his work, it’s a fascinating examination both of the genre and of his own creative process.

Let Me Tell You…With Joan Hamburg – Daniel Silva: In this show Silva talks about his thriller ‘The New Girl’, which really delivers an interesting look at his work yet again. Witty and informative, it’s a fun and entertaining podcast featuring the author.

Professional Book Nerds – Interview With Daniel Silva: This again looks at ‘The New Girl’, as Silva examines the real-life case that inspired the story. It also looks into how he wrote the book, and his writing process in general.