The ‘Mitch Rapp’ series is written by American writer Vince Flynn originally, and then Kyle Mills continued the series after Vinces untimely passing.

A character who’s very much of his genre, counter-terrorist operative Mitch Rapp was the creation of author Vince Flynn. Thwarting terrorists, he starts his life working for the CIA after his high-school sweetheart and girlfriend is killed in the Pan Am Lockerbie bombing. This then fuels him over the course of the novels, as he becomes the hyper-skilled agent that readers worldwide know and love today. After Vince Flynn passed away, the series continues through the American thriller writer Kyle Mills.

The first book to be released in the series was Transfer of Power in 1999, although American Assassin would be published later on in 2010, and this would be the first book chronologically. Transfer of Power itself would have an exciting action premise with the White House being occupied by terrorists, in a story reminiscent of Die Hard, and this would establish the tone of what was to come. Over time the series and the characters would progress, with Mitch Rapp developing layers beyond his action hero roots. Building upon the character in American Assassin, Flynn would provide backstory to Rapp, allowing him to become more rounded.

In 2017 a film adaptation of the novel American Assassin would come out starring Dylan O’Brien in the lead role as the young Mitch Rapp. Directed by Michael Cuesta it would cement the staying power of the franchise. The series itself has gone on to receive numerous awards, including the 2017 Booklist, and the 2012 Library Journal.

I decided to do something different for this section. Rather than just do the “Best Mitch Rapp Books” I thought I would do it by author. As Kyle Mills took over the writing and it is incredible however I feel weird trying to compare him and Vince. Hope you understand! 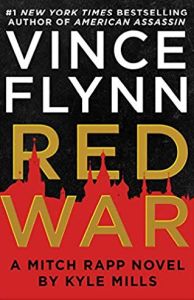 The 4th Rapp book written by Kyle Mills. The Russian president, aptly named “Maxim Krupin”, has brain cancer. He has a plan to attempt to deal with it that includes kidnapping people and testing something highly dangerous on them. However with him being unstable, Irene Kennedy is highly concerned and needs to send Mitch Rapp to Russia to first confirm the rumours are true, and if so then deal with it. Rap must go up against some of the best security in the world to attempt to stop an all out war.

I’m not sure what it was but this one just didn’t click with me. I read a book a day but this one I ended up reading in segments over the course of two weeks. Usually I just inhale any and all Rapp books but not so with this one unfortunately. 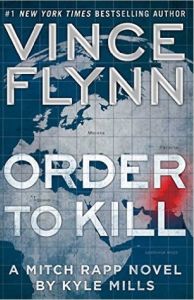 The 2nd novel Kyle wrote. Pakistani nukes are looking like they are going to fall into the hands of terrorists, and Rapp is sent to stop this happening – especially from them ending up in Russian hands. Rapp then has to go undercover into Russia pretending to be an ISIS recruit where he discovers a much crazier plan going on.

Kyle takes Rapp in a more interesting direction. Some people argued that Rapp was becoming a bit of a superman in recent books by Vince and that Kyle made him more human. I do think that was the case to a degree and I liked to see that. Reminds me of the Nick Stone series by Andy McNab where Stone has a lot of faults and it adds to his character. I just remember the ending of this book being dull. Kyle described a lot of action that I couldn’t picture which was quite rare but it turned me off it. It was still a solid effort. 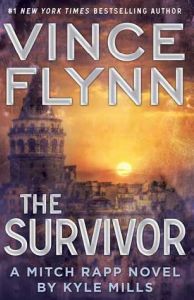 The first book written by Kyle Mills following Vince Flynns untimely passing. I’m not sure if there was a blueprint laid out by Vince Flynn prior to his death for this book or not. I’ve heard that is the case but not sure. I know Kyle said that the previous book left a lot of clues as to where this book should go, and he just decided to follow them.

Joe Rickman, an ex-CIA employee, has stolen many documents and betrayed the USA. Rapp is sent to hunt him down. Rapp delivers but unfortunately there is more to it and Rickman is able to haunt Rapp fromb ehind the grave. Rapp is then in a race to get the data Rickman left behind before the enemy get it.

This was an excellent, excellent job by Kyle. I’m sure many people, myself included, went into this one concerned. We didn’t need to be. Kyle did a fantastic job at capturing the Rapp universe and the writing of Vince Flynn very well. He stuck with the style of Flynn and did a great job at that. 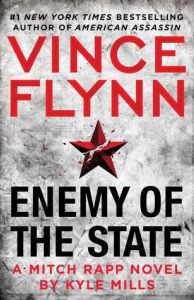 Kyle Mills brought about a drastic change for this one – he pulled Mitch out of the CIA and had him set up a dream team featuring characters from previous books. The story of this one is that the Saudi Kings own nephew is sending funds to ISIS. The US can’t be seen attacking Saudi royalty, so Mitch goes freelance to take him out.

This was such a risky move by Mills but I loved it. He wanted to stir up the status quo and he did an amazing job at it. His writing and the ability to bring back older characters and pay tribute to them was excellent too. One of those things where if you didn’t know authors had switched, you honestly wouldn’t know. His writing of these characters also showed an immense knowledge and passion of the Rapp universe that Vince created, which I appreciate. 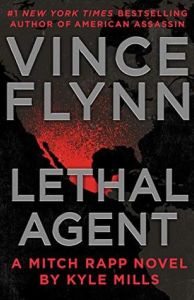 My favourite Kyle Mills book by far. It’s all about ISIS again. They’re working on a biological weapon that will take out the USA. They’re also using a Mexican drug cartel to attempt to get the bioweapon into the USA. Rapp has to actually go undercover and infiltrate one of the most dangerous Mexican cartels to track down the man behind all of this.

For me, the best thing about this was the political arena. Not only did Kyle manage to navigate a fictional political arena that is based on real life without any sort of bias, however he managed to get into politics in the way Vince Flynn would. Remember when you would there, emotionally charged and angry, at the way fictional politicians were trying to stop Rapp from saving the world? Same deal here! This was an ambitious and excellent effort from Kyle Mills, and my favourite book yet – seeing him be able to navigate the political world yet make it exciting that I thought only Vince Flynn could do.

Best Books & Series To Read If You Like Mitch Rapp:

Scot Harvath: Written by Brad Thor, Scot Harvath is an ex-Navy SEAL Secret Service operative, as he travels the world dealing with threats to the security of the United States. Told with a sense-of-humor and fun, this entertaining action packed series follows the charismatic individual, as he gets in to different scrapes and near misses. Whether it’s rescuing the president and his daughter, or defending America from terrorists, he’s always sure to get the job done whatever the cost.

Jack Reacher: No surprises for guessing the entry of this one, and we’re sure plenty of you have checked out the series already. For those of you that haven’t though, this series by British author Jim Grant, aka Lee Child, is a definite must for anyone interested in high-octane action thrillers. Following former US Major Jack Reacher, it sees him roaming America taking on increasingly dangerous and difficult jobs, in what is the pinnacle of the genre, seeing adaptations for both cinema, and now television, during its run.

Joe Ledger: Branching off in to the realms of science-fiction at times, this series of techno-thriller stories from Jonathan Maberry manages to keep itself grounded throughout. Following the exploits of Captain Joe Ledger, a former detective in the Baltimore police force, and ex-Army Ranger, he’s tasked by the US goverment with keeping terrorists at bay. The threats usually involve deadly pathogens being developed, sometimes even to the point of potentially creating zombies, as the action keeps on coming in this nail-biting series.

Jason Bourne: So this is another name that will likely be familiar, with the Robert Ludlum series spawning a number of books, along with the Matt Damon film franchise too. Featuring the spy starting out with a fractured memory and mysterious past, it sees him trying to right the wrongs that were done to him by secretive government agencies. Trained as a killer, he must put the pieces together, whilst untangling fact from fiction in the conspiracy around him.

Jane Hawk: For a female protagonist in the action packed lead role, readers can’t go wrong with the Dean Koontz penned series of Jane Hawk novels. Less of a spy and more of a disgruntled FBI agent going her own way, she does whatever it takes to get the job done. Koontz combines suspense and action, making her a formidable force for good, as she untangles the conspiracy of lies surrounding her husband’s apparent suicide, which she knows to be murder.

Meet the Thriller Author – Kyle Mills: Giving an insight into the process of writing a Mitch Rapp novel, this interview looks at what’s needed in taking over such a successful series. With Kyle Mills stepping into the shoes of Vince Flynn, this is definitely a must for any fans of the novels, letting them know what to expect in the future.

Author Stories – with Kyle Mills: Speaking to Kyle Mills, the interview looks further into the character of Mitch Rapp and what the franchise means. Giving insight into the character, this also provides some interesting information on Kyle Mills as an author and his creative process.

Authors on the Air Global Radio Network – Kyle Mills discusses Mitch Rapp: Providing a fully rounded look on Kyle Mills as an author, this allows him to speak in a casual and laid-back manner. Looking at his writing process, this is an illuminating interview of him and how he writes a Mitch Rapp novel.