The dictionary defines horror as an intense feeling of fear, shock, or disgust. What it doesn’t define is just how incredible that feeling is when read in a great book. It has been said that the human mind is truly the scariest thing of all and when you read a good horror book, that is just more fuel for the fire.

I started reading horror like many people my age with R.L. Stine’s Goosebumps series. My friends and I would trade our favorites back and forth, always recommending the next great one. I’ll never forget reading Say Cheese and Die! about a camera that shows bad things before it happens. It is kind of a tried-and-true story now, but it really scared me when I first read it and I have been hooked ever since.

As the years have gone by, I’ve tried some of the more ‘extreme’ horror books, but I always come back to stories like that. Relatable stories or stories that I could picture myself in. I like kaijus and monsters as much as the next person, but what really scares me is a story that feels like it could happen to you. There is no feeling quite like reading a really scary horror story and then hearing a creak in your home, wondering what it could be.

When putting together this list, I tried to capture that feeling the best I could. 2018 had a bunch of great horror books to choose from so just because something is listed as an honorable mention below doesn’t mean its not great!

This list is the best horror books that were published in 2018. 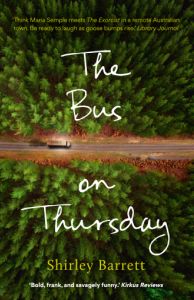 See at Amazon
5: The Bus on Thursday by Shirley Barrett One day Eleanor Mellett feels a bump on her breast while scratching her armpit and the next thing she knows is under the knife with a doctor helping her to fight breast cancer. The cancer plus a breakup leads to her looking for a fresh start.

Eleanor discovers a small town called Talbingo that is looking for a teacher. The previous teacher was considered the most caring teacher ever, but she just disappeared one night. Eleanor moves into the role eagerly, but soon finds that the town of Talbingo is a bit creepy. The kids are unstable and overly sensitive, and the local friar who believes cancer is caused by demons.

She makes her home in a small, remote cabin. Eleanor lives alone and has little contact with the outside world as her cabin has no cell or Internet service. Her cabin’s door has many locks on the front door as well and whatever is knocking on it late at night provides a good reason for them. 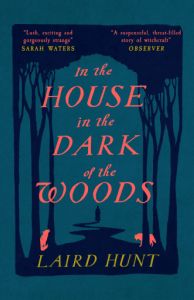 See at Amazon
4: In the House in the Dark of the Woods by Laird Hunt This psychological horror story set in colonial America sees a Puritan woman going missing in colonial New England.

The woman may have run away and abandoned her family, or she was kidnapped and left to wander in the dense forest of the north. Whatever the reason, she finds herself alone and lost in the forest. Then she meets another woman in the forest which changes everything. She’ll be set on a journey through the dark woods where she will encounter almost-human wolves, a deep well filled with the screams of men, and a living ship made of human bones. The woman will find that the evil she is fleeing has actually been inside her all along.

This book will keep you on the edge of your seat like you were watching a horror movie. It starts out dark and only gets darker as it goes along, one of the best horror books of the year. 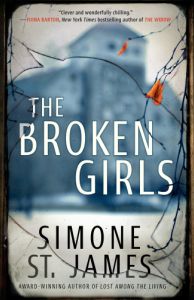 See at Amazon
3: The Broken Girls by Simone St. James In 1950s Vermont, there was a boarding school for girls that nobody wanted. The girls who filled this school were troublemakers, illegitimate children, or simply too smart for their own good. The school is known as Idlewild Hall and the locals believe it to be haunted. A group of four girls will bond over their fears and form a tight bond – until one of them mysteriously disappears.

Over twenty years later, journalist Fiona Sheridan’s sister’s body is found in the overgrown fields near Idlewild Hall. The woman’s boyfriend was tried and convicted of the crime, but Fiona reminds haunted by the events. She’s unable to let go of the thought that something wasn’t right about the case.

It turns out that Idlewild Hall is being restored by an anonymous benefactor and she heads out to write a story about it. In her research, she’ll make a shocking discovery that will link her sister’s death to secrets from the past that were meant to stay hidden. 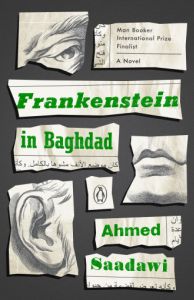 See at Amazon
2: Frankenstein in Baghdad by Ahmed Saadawi A modern day Frankenstein tale set against the backdrop of U.S.-occupied Baghdad. This book is a surreal mix of black humor, political commentary, and devastating horror.

Hadi is a scavenger on the streets of Baghdad who goes around the city and collects human body parts and stitches them together. He claims that his goal is put the bodies together so that the government will recognize them as people and give them a proper burial as opposed to the indignity that is happening to them now.

His seemingly noble goal takes a turn when the corpse disappears and a wave of murders sweeps the city. The killer has been shot, but cannot be killed. Reports of a horrendous looking killer soon make Hadi realize exactly who is doing this. He’s created a monster, one that survives off of human flesh. The monster starts by working its way through the guilty, but soon its bloodlust will take down anyone in its path. 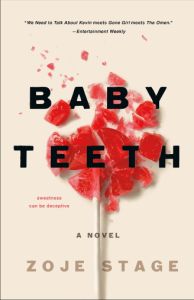 See at Amazon
1: Baby Teeth by Zoje Stage Hanna is a seven-year-old girl and a sweet angel in the eyes of her father. She loves him very m uch, but her mother Suzette often stands between them. If only she could get rid of her…

Suzette loves her daughter, but her health and sanity are being weakened daily by her. There have been years of expulsions and strained home schooling, and now she is becoming increasingly frightened of her own daughter and her little games. Alex, her husband and Hanna’s father, is blind to the family dynamics and only sees the good in the little girl. However, Suzette sees the truth about their little girl and fears that she may have a sinister agenda.

The mother and daughter will engage in a battle of wills in this tight tale of psychological suspense. Filled with twists, Baby Teeth is an unputdownable story of the frailty and falsehood of the familial bonds between mother and daughter.

We Are Where the Nightmares Go and Other Stories by C. Robert Cargill : Horror is perfectly suited to short fiction and this collection of stories by C. Robert Cargill was one of the best of 2018. The title story here really sticks out as it tells the tale of a little girl crawling through a door beneath her bed and ending up in a world of lost children, scary clowns, and the fragments of children’s bad dreams.

Infidel by Pornsak Pichetshote: This graphic novel is one of the best horror stories of the year. The story follows an American Muslim woman and her multi-racial neighbors as they move into a haunted building. It is not your classic ghost story though as these entities feed off of hate and xenophobia.

Bedfellow by Jeremy C. Shipp : A family with a thing living in their house. It is weird at first, but they soon become accustomed to it. Now, they are making more and greater sacrifices to this beast, breaking down the thrall that binds them to it. The family will enter into psychological warfare with this creature in order to be released from its bind.

We Sold Our Souls by Grady Hendrix: Kris Pulaski was in a metal band called Dürt Würk in the 1990s that was on the brink of success when the lead singer broke up the band to embark on a solo career. Terry Hunt rocketed to stardom while Kris and the rest of the band. When an act of violence turns Kris’ life upside down, she begins to realize that Terry did more than breakup the band to earn his success. This sets her out on a journey to reunite the band and confront the man who ruined her life.

The Cabin at the End of the World by Paul Tremblay: A seven-year-old girl named Wen heads to a remote cabin in the woods with her two dads. One day, a stranger named Leonard appears in the driveway and delivers her a message, “None of what’s going to happen is your fault.” Three more strangers arrive and Wen runs, but they want to be let in the home because they need their help to save the world.