Set both in and around the city of Edinburgh, the Inspector Rebus novels are very much rooted in their time and location. Being an institution almost within the detective genre, some have come to identify the books as being hallmarks of the gritty detective procedural. Written by the Scottish author Ian Rankin, he has managed to create a franchise that has stood the test of time, with his stories being adapted on numerous occasions. Following the character of Detective Inspector John Rebus, they chart his many cases, solving crimes and mysteries, as they’re told in a hard-boiled style.

Readers would first be introduced to the series in 1987 with Knots and Crosses, and there have been twenty-three titles so far and counting. The second book would be titled Hide and Seek, which was published in 1991, and would cement the character of Rebus not just for readers, but for Rankin himself. Many of the stories have come to vocalize Rankin’s views on Scotland and society, as he often uses Rebus as a mouthpiece for his own thoughts and ideas. This serves to make the stories feel not only grounded, but that they also have something real to say, giving them a sense of personality in the process. Over the course of the series there has also been collections of short-stories featuring the Rebus character, such as The Beat Goes On: The Complete Rebus Short Stories, which was released in 2014.

There has been many adaptations of the series, most notably with the show ‘Rebus’, which was broadcast between 2000 and 2007, running for a total of four seasons. Adapted for the radio and stage too, it’s an award winning franchise that’s gained critical acclaim and mass-public approval across the board. Over the course of the series there has been a number of stand-out titles, many of which continue to enthrall readers to this day.

Personally these are what I feel to be the top five stand-out titles in the series are: 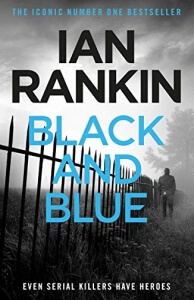 During the seventies there was a serial-killer named ‘Bible John’ who would terrorize Glasgow, killing three women he met in a ballroom. Now it appears that there’s a copycat killer on the loose nicknamed ‘Bible Johnny’ by the media, and it would be the ideal investigation for Inspector Rebus had he not just been assigned to the case of a murdered oilman in Edinburgh. This then leads him into the media circus surrounding Bible Johnny, as he now finds himself dealing with two cases, needing to watch himself every step of the way.

Utilizing multiple locations, this is a great entry into the series, as it deftly handles the different narratives alongside Rebus himself. An effectively told mystery story, it really manages to evoke a sense of atmosphere, handling the plot carefully along with the characters. As the eighth title in the series, it really manages to carry itself forwards with confidence, allowing the world to fully flourish and come to life. 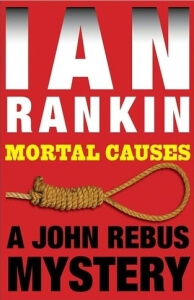 Deep beneath the city of Edinburgh there’s numerous rooms and medieval stone cellars dating back centuries, where no sound comes out from. It is in one of these that the body of a man is discovered tortured and attached to a butcher’s hook, left only with a mysterious tattoo upon his wrist. Taking up the case, Inspector Rebus must now deduce the clues and find out who is behind this grisly murder, as it appears to have been an execution.

Using the history of Edinburgh to full effect, this story makes the most of its environment, evoking a strong ambiance throughout. This is the sixth title in the series too, so the story jumps straight in, all the while developing the character of Rebus a little deeper. It’s a great solid mystery that definitely pulls out all the stops, showing another side to the city that readers don’t usually get to see. 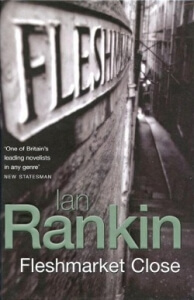 The killing of an illegal immigrant draws up questions of racism, as a body is discovered murdered within an Edinburgh housing scheme. Dealing with the case, Inspector Rebus must also cope with problems back at the station, because it appears there are those that want to see him retire. Navigating the darkened underworld of Edinburgh, it also seems that there’s the case of a missing teenager, as Rebus begins to get closer to the truth.

Dealing with serious themes and issues in this novel, it being the fifteenth installment of the series, is something that Rankin excels at. Saying exactly what it is that he wants to say, he balances the message of the book expertly alongside the mystery itself. Continuing the franchise in an intelligent and effective manner, he really comes through with this, in what I found to be a wholly gripping and engrossing novel. 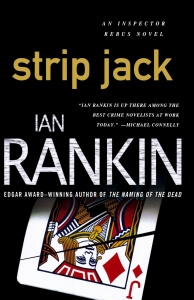 It appears that someone has been set-up, as Inspector Rebus is now investigating the case surrounding a once respected MP. Caught up in a police-raid on a brothel, the MP Gregor Jack’s ex-wife, Elizabeth, suddenly disappears without a trace too. Then her body is discovered, and it seems there’s a killer on the loose, one that has the advantage on Rebus, as he follows the trail in close pursuit.

There’s a lot of suspense in this novel, as Rebus attempts to catch the killer before it’s too late, showcasing Rankin’s mastery of tension. Gripping as it is enthralling, I really couldn’t put the book down, as I really wanted to find out what happened next, with all its twists and turns. As a character, Rebus himself is a compelling one with his complete disregard for authority, leaving you never knowing quite what he’s going to do. 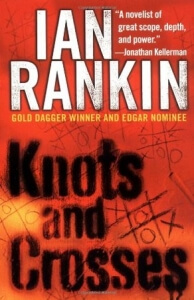 A spate of murders is taking place all across the city of Edinburgh, and it appears that the killer is tied to him. Wanting to put the past behind him, John Rebus meanwhile has difficulty dealing with the trauma of serving in the SAS, as the screams still haunt him. With the media reaching fever pitch around the murders, he must silence his own fears, and do his job, finishing the killing spree once and for all.

This is the first novel in the series, and it’s Rankin at his most raw with the character, really giving Rebus that much needed gritty edge he’d become so famous for. Setting up the character and his world, it would be the first time we’d get to see what he was really all about and where he came from. Providing some illuminating backstory, it’s a compelling mystery that gets to the heart of the genre, playing with it and taking it to bold new ground.

Best Books & Series To Read If You Like Inspector Rebus:

Inspector Morse: The English crime writer Colin Dexter is well known for his Inspector Morse series of mystery novels, featuring the detective as he solves various cases. Working in and around Oxford, he’s been highly influential within the world of British crime fiction, working alongside his partner Inspector Lewis on many cases. Adapted into a long-running television series starring John Thaw in the lead-role for ITV, he’s an institution in of himself, setting the standard for the genre for legions of thriller fans worldwide.

Harry Bosch: Written by the American novelist Michael Connelly, this series follows the story of Detective Harry Bosch, in what is essentially a modern take on the mystery noir. Knowing his influences, Connelly plays with the format, creating a character that’s fully rounded and, coming from a broken background, he goes about solving homicide cases in Los Angeles with empathy. The books have also been adapted into a highly popular television show for Amazon Prime, with Titus Welliver in the lead-role as the eponymous detective.

Vera Stanhope: Detective Chief Inspector Vera Stanhope is the leading character in her series of the same name, living and working in Northumberland for the police department. Solving various different cases, the series was created by the British writer Ann Cleeves, and has gone on to achieve a huge amount of success. It has also been adapted into a long-running show for ITV starring Brenda Blethyn as Vera herself, becoming a much loved staple of British TV in its own right.

Logan McRae: The Logan McRae series by Scottish writer Stuart MacBride is a well told and effective collection of thriller novels set in northern Scotland. Living and working in and around Aberdeen, Detective Sergeant Logan McRae is very much a Scottish creation, much like Inspector Rebus. Dealing with all manner of dangerous and deadly villains, he’s an astute and resourceful individual who will do whatever it takes to get the job done.

Kurt Wallander: Set in the town of Ystad in Sweden, the character of detective Kurt Wallander is the creation of Swedish writer Henning Mankell. With a complex backstory, he must overcome his own issues, while dealing with a number of mysteries that face him in his day-to-day job. Adapted for the television both in Sweden and abroad in the UK, he’s been portrayed numerous times, including a series for Netflix too.

The DGP – Inspector Rebus author Ian Rankin: Speaking to the man behind Inspector Rebus, this interview gets into the mind of Ian Rankin. Looking at his creative process, it’s an insightful and illuminating show.

The Seattle Public Library – Ian Rankin: Celebrating thirty years of his character, Ian Rankin looks back on his series of Inspector Rebus novels. Talking before an audience, he fields questions, examining his own influences along the way.

It’s Friday! with Jim White – Ian Rankin: Here Ian Rankin examines his own similarities to his creation of Inspector Rebus, seeing how they are both different and how they’re the same. It’s an interesting portrait of him as an artist and as a person.