British thriller novelist Zoë Sharp is at the forefront of her genre, writing stories about action heroes that are filled with depth and heart. Combining action and drama with real pathos for her characters, she manages to bring the humanity out behind each of her protagonists in a genuine and authentic manner. This is especially the case with her Charlie Fox collection of novels, as they follow the Special Forces operative with a background in military training. Working for herself, she takes on a series of missions, defending those around her, whilst bringing those guilty of wrongdoing to justice.

The first Charlie Fox novel, titled Killer Instinct, would come out in 2001, setting the scene for the character and her series to follow. Sharp would quickly go on to follow this up in 2002 with the sequel Riot Act, providing the next mission for the eponymous special agent. Each book would dive into her career after she was discharged from the military, with her being a highly skilled operative out in the field. We learn about the circumstances surrounding this in the prequel novellas, such as Trial Under Fire, which was released in 2018 and briefly looks at her time spent serving in the army. Working as a bodyguard to get by in-between jobs, she deals with a lot in her daily life too, as the reader gets to know her as a real living breathing human.

Prior to working as a full time writer, Zoë Sharp would spend some time as a photojournalist; a career which would provide her with a lot of creative insight and inspiration. Winning awards for her work, including an Edgar, Macavity, and Benjamin Franklin, she’s not without her fair share of critical acclaim either. Over the course of her career writing the Charlie Fox novels she’s produced a number of noteworthy highlights, many of which stand-out as some of the best that the thriller genre has to offer.

These are my own personal top five from the Charlie Fox series so far: 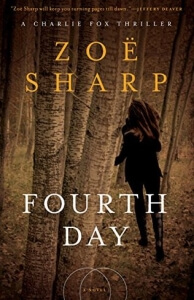 Calling itself the Fourth Day, there’s a cult which Thomas Witney believes is responsible for the death of his son. Heading in five years ago, Witney was intent on confronting the charismatic leader, only to never return, having remained with them all this time. Charlie Fox must now find him with the help of her partner, Sean, bringing him out back into society, even if he’s changed beyond all recognition.

With some intense themes and ideas, Sharp layers Fox with a number of different character traits, as she’s played off against the intriguing premise to full effect. The relationship between Charlie and Sean also allows her character to come alive off of the page too, as they really resonated with me. There’s also an exciting mystery at the heart of it too, as it kept me guessing constantly, never knowing what was going to happen next. 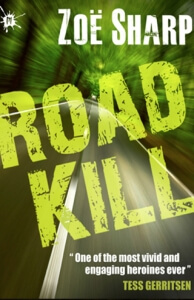 Still reeling from the events surrounding her job as a professional bodyguard in the United States, Charlie Fox must now return home to pick up the pieces in the wake of her trauma. That’s when she has to deal with the aftermath of a bike crash involving her friend, as she is once again thrust into the middle of the action. Looking to infiltrate a biker group now, she aims to discover what happened to her friend Clare, as she soon learns there’s more to this mystery than meets the eye.

More of a personal story, this has a lot of heartbreak in it, something which works extremely well in the context of the narrative. Giving the novel a greater sense of weight and heft, Sharp handles it all with expert precision, knowing exactly what she’s doing at all times. The characters are very well drawn and you feel for their plights, particularly that of Charlie Fox, as it definitely manages to flesh her out as a fully three-dimensional protagonist. 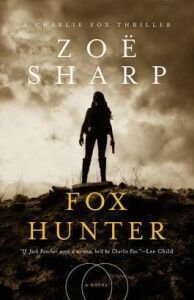 Wanting to the past behind her, Charlie Fox promised that she would never seek the men that put an end to her career in the military, that is until now. Assigned to a mission in Iraq, she must locate a former comrade, as they’ve gone missing in the countryside there, and soon the worst is feared. It also appears that a private security contractor has been found butchered, and Fox starts to worry that it could be her former boss and partner Sean Meyer pursuing revenge on her behalf.

This is a great action story with plenty of intriguing character elements that again threw me into the world of Charlie Fox. With this being the twelfth story in the series, I really felt I knew her at this point, but the book still pulled out plenty of surprises along the way. The narrative is fast, but provides a lot of room to allow the characters to maneuver within, letting them really come into their own. 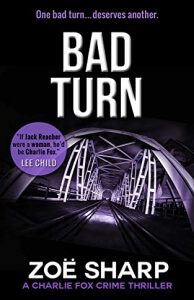 House-sitting for the notorious billionaire arms dealer Eric Kincaid, Charlie Fox is struggling to make ends meet. That’s when their New Jersey home is suddenly attacked and an attempted kidnapping of Eric’s wife Helena is abruptly foiled by Fox. Offering her a full-time job as protection to his wife, Charlie soon finds herself fighting off more dangerous and deadly enemies with each passing moment, as their struggle for survival goes international.

While this takes place across borders, it’s a smaller more constrained story than many of the others, which really works well overall. The characters come alive once again, as there’s real stakes at hand, in this exciting and thrilling fight for survival against all odds. You really feel yourself rooting for the hero, with many of the characters surprising you throughout, creating an intricate and finely tuned plot that captured me from the very beginning. 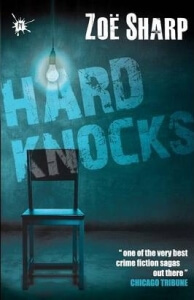 Sean Meyer asks Charlie Fox to investigate the death of Kirk Salter during an exercise training course at the prestigious Major Gilby’s. Initially she sees Salter as a traitorous ex-Army comrade so she’s reluctant, but finds it difficult to say no to Sean after their shared history together. Separating the fact from the fiction, she soon finds herself tangled in a web of lies that she needs to pull herself out from before she loses herself completely.

This feels like a real test for Charlie Fox as a character, as she’s fully pushed to her limits, seeing what she’s really capable of. For any fans of the series this title is definitely a must, as we get to see who she truly is as a person, making her world and personality more whole. Pushing the premise far as it can go too, this never holds back on the action either, as it kept me glued to my seat constantly turning the page.

Best Books & Series To Read If You Like Charlie Fox:

Jack Reacher: Writing under the pen-name of Lee Child, the hugely influential British author James Dover Grant is known worldwide for his exciting series of Jack Reacher novels. Following a former major in the United States Army, it charts Jack Reacher’s travels across the US, as he undertakes various different missions. Serving only himself, it’s a thrilling series, as the character has become synonymous with the genre, spawning a movie adaptation, along with a television series from Amazon Prime.

Pike Logan: This franchise by the American author Brad Taylor really does what it sets out to, which is to tell an exciting action adventure series filled with tension and suspense. Telling the story of Pike Logan, it sees him leading his Taskforce, as he completes a number of covert jobs for the United States government. Dealing with conspiracies and terrorists, he must ensure that justice prevails by any means necessary, in this well told collection of thrillers.

Liz Carlyle: Finding her way through the male dominated world of the MI5, this sees Liz Carlyle working as an operative for British Intelligence. Written by the British author Stella Rimington, the stories are filled with personality, taking the genre to bold new heights. Keeping me constantly hooked throughout, I was constantly turning the page, as it continually surprised me at every twist and turn.

Mitch Rapp: Created by the American author Vince Flynn, before Kyle Mills took the helm, the Mitch Rapp series is a strong action thriller franchise that’s successfully been running for many years now. The character of Mitch Rapp is a special operative for the US government, undertaking the missions that no-one else can. Deadly as he is enthralling, these stories are great for anybody that likes their action coming thick and fast, filled with plenty of intriguing backstory for the character himself.

Jane Hawk: Typically writing horror novels, the American author Dean Koontz turns his hand to conspiracy thrillers here, and pulls it off expertly. Focusing on the FBI agent Jane Hawk, the series tells the ongoing story of how she must deal with a national conspiracy looking to brainwash citizens. It’s a moody and atmospheric collection of novels that really brought me into the world, immersing me deeply within it.

Authors on the Air Radio – Zoë Sharp: Largely looking at the series Charlie Fox, this is ideal for any fans hoping to find out more on the character. It also takes a look at the career of Zoë Sharp, and how she came to be a writer.

CrimeFiction.FM – The Charlie Fox Series, by Zoë Sharp: Speaking to Zoë Sharp about her Charlie Fox series, she provides insight into how the character came about and what her inspirations behind it are. It’s a brief, but succinct interview that offers fans of the series an interesting look her creative process as a writer, and the series as a whole.

The Crime Cafe – A Chat with Thriller Author Zoë Sharp: This show offers a window into the work of Zoë Sharp, looking at her career in a more general sense. Offering an overview of her history as a writer, it looks at where she came from and who she is as an author of thriller novels.