Tom Clancy is a legend in the world of writing. His detailed espionage and military-science stories have garnered him millions of fans around the world and lead to his work being adapted in a variety of mediums. His work has been turned into major motion pictures, television shows, video games, and comic books.

Clancy made his debut as an author in 1982 with the release of The Hunt for Red October. Prior to becoming an author, Clancy worked at an insurance agency in Maryland. The company was started by his wife’s grandfather and he would later purchase the company. During his time at the agency, he worked and wrote novels in his spare time.

His first book proved to be a major success. Clancy only believed that his book would sell around 5,000 copies, but it sold quite a bit more. Then it was praised by President Ronald Reagan which lead to an explosion in sales and the book becoming a national bestseller. The book was the introduction to Jack Ryan who would star in many of Clancy’s future novels.

Clancy passed away in 2013 near his home in Baltimore. He left behind a legacy as an author who redefined his genre. He was incredibly financially successful as well, earning a then record $50 million for world rights to two new books in 1997,

There are few authors who have left their mark on the world of fiction quite like Tom Clancy. Below you will find some books that were either inspired or in some way allowed to happen because of the work that Clancy put in. 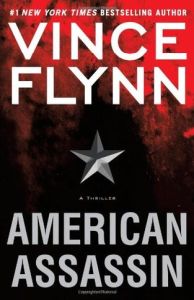 Fans of Tom Clancy or the Jack Ryan series are doing themselves a disservice if they haven’t read Vince Flynn and Kyle Mills’ Mitch Rapp series of books.

The character of Mitch Rapp was a gifted athlete in college who didn’t care about much of anything except for having a good time. That all changed when terrorists attacked innocent American citizens and killed two-hundred-and-seventy people, including his girlfriend. While many reacted to the tragedy by looking for comfort, Rapp wanted something else. He wanted retribution.

Decades of political maneuvering has left the CIA in a vulnerable position and CIA Operations Director Thomas Stansfield knows that he is going to need to change things if he wants to take on terrorism. He orders the formation of a new group of clandestine operatives who will work outside the normal chain of command, operatives that legally do not exist.

Six month of training later and Rapp is one of these men. Intense training has prepared him to take the fight to his enemies and now he’s off to Istanbul. There he will assassinate a Turkish arms dealer. This is only the beginning as he will travel across the hemisphere, leaving bodies in his wake. The path will take him to Beirut where the enemy awaits him, but Rapp won’t go down so easily. 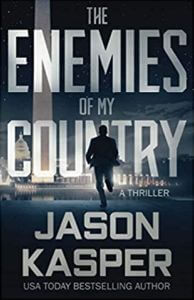 The Enemies of My Country by Jason Kasper

Jason Kasper is a former Green Beret and bestselling author of the Shadow Strike series that begins with this novel.

David Rivers is an elite assassin who is now working as a CIA contractor. That’s when he’s on the clock. When he’s off the clock, Rivers prefers to stay in his secluded mountain home in Virginia and live the life of a quiet family man. He’s deep undercover and his own wife doesn’t even know what he does for work.

In another part of the world, Rivers will be sent to assassinate a foreign operative. The intelligence points him to an attack on U.S. soil that could happen any day now. If he wishes to stop the attack, he must hunt down the terrorists before it’s too late.

As if he wasn’t already motivated to do so, he becomes especially motivated when the intelligence points to the attack happening in his own hometown and his wife and daughter are mentioned by name. 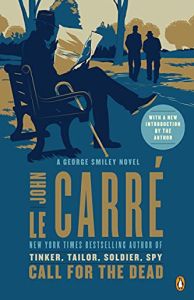 Call for the Dead by John le Carre

Much like Clancy, John le Carre is a peerless author of spy novels. Few have written about Cold War espionage and international intrigue quite as well or anything like le Carre. This is the first book in his most popular creation, the George Smiley series of books. There are nine books in the series with the most popular being Tinker, Tailor, Soldier, Spy which was made into a film.

George Smiley is someone that no one would consider as a spy which is exactly what makes him so good at it. The story begins as Smiley is doing a routine security check and sees a civil servant named Samuel Fennan kill himself. It is not long after that Circus head Maston attempts to blame Smiley for the man’s death.

So Smiley decides to begin his own investigation and meets with the man’s widow to find out what could’ve made this man want to take his own life. Someone doesn’t want him to do this though and he is ordered off the inquiry. That’s when he receives an urgent letter from the dead man.

Now, Smiley is left to figure out if the East Germans and their agents know more about this man’s death than the Circus had imagined. 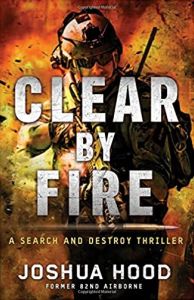 Clear by Fire by Joshua Hood

Joshua Hood is the author of Clear by Fire, the first book in the Search and Destroy Thriller series of books. The books are inspired by the experiences of Hood himself, a decorated combat veteran and a former member of the 82nd Airborne division.

The book follows a character named Mason Kane, a loyal American soldier and a member of an off-the-books unit known as Anvil Program. The unit was a series of black ops soldiers who waged their own war from the shadows. Until the day that his commander ordered the murder of an innocent Afghan family in order to force America to stay involved in the Middle East.

For the first time in his career, Kane refuses an order and finds himself on the run by his former comrades. He is labeled a terrorist by the U.S government and is a wanted man. His survival skills, as well as the help of a female Special Operations operative named Renee Hart, are all that he has to keep himself alive as he tries to unravel the conspiracy that stretches into the deepest levels of government, all the way to the President’s inner circle. On top of that, he’ll have to go up against the world’s most dangerous soldiers to stop them from completing their evil plan.