Science fiction is one of the most wide ranging genres and has birthed some of the greatest stories of all time. From Philip K. Dick to Blake Crouch to N.K. Jemisin, we have seen some great, original stories in this genre over and over through the years.

The year of 2018 was very good year in the world of science fiction and this list was actually kind of difficult to make. So many great books were left off the list and figuring out my top five books was extremely hard. Honestly, anything on this page could be my number one if I had to make this list again!

I tried to mix up the list the best that I could. Not just space books or near future or hard sci-fi, but a little bit of everything. There is a little bit of something for everyone here, no matter what your favorite sub-genre of science fiction.

This list is the best science fiction books that were published in 2018: 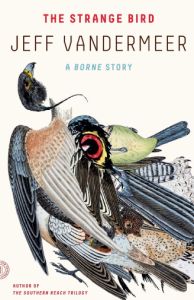 See at Amazon 5: Strange Bird by Jeff VanderMeer There isn’t really anyone who writes novels quite like Jeff VanderMeer. His latest features him writing about a Strange Bird, a new kind of creature that is part bird, part human, part many other things.

Now, the lab she was created in is under siege and the scientists who created her are trying to kill her. She manages to narrowly escape, but now enters a world that does not welcome her. The sky is filled with wildlife that rejects her and the technology of humanity. She enters into the orbit of the Company, a collapsed biotech firm that has populated the world with their experiments like networked foxes and a giant predatory bear.

However, of all the creatures she encounters she feels the most kinship with humans who are all doing what they can to survive. They are also the most insidious. 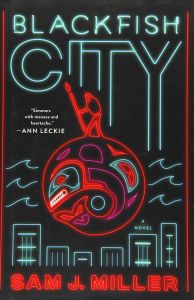 See at Amazon 4: Blackfish City: A Novel by Sam J. Miller This book features one of the cooler cities of the future that I have read in science fiction. The world takes place in a floating city about the Arctic Circle after the world have been ravaged by climate wars.

It is a rough way of living and now the city is starting to fray as crime and corruption have started to seep in. There is also a new disease called “the breaks’ that is ravaging the people.

The world is shaken up with a strange visitor arrives riding an orca whale with a polar bear sidekick. She calls herself an orcamancer and ends up putting together a group of four people to stage a revolution. The group must band together to save the city before its too late and learn things about themselves they didn’t previously know.

Sam J. Miller’s powerful novel about a political corruption, organized crime, technology run amok, the consequences of climate change, gender identity, and the unifying power of human connection is one of the best of the year. 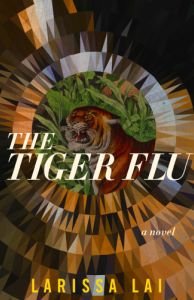 See at Amazon 3: The Tiger Flu by Larissa Lai The first book by Larissa Lai in sixteen years sees her writing about a community of parthenogenic women as they go to war against disease, technology, and the powerful men that threaten them with extinction.

Kirilow, a doctor’s apprentice, is in a relationship with Peristrophe who is known as a starfish because of her ability to regenerate her own limbs and organs. She uses this power to help her clone sisters that need organs. Tragedy strikes when someone arrives from Salt Water City with a flu, giving it to Peristrophe which ultimately kills her.

Now, the flu is a full fledged pandemic and Kirilow must travel to Salt Water City in hopes of finding a new starfish to help save her sisters. She finds Kora, a woman desperate to save her family with everything that she needs, but Kora is unwilling to abandon her family. As Kirilow tries to convince her, the two are kidnapped by powerful men who hope to use them as test subjects. 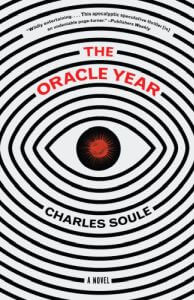 See at Amazon 2: The Oracle Year: A Novel by Charles Soule The story begins when a bassist named Will Dando awakens from a dream one morning with 108 predictions about the future in his head. The predictions in his head take him from unassuming to the most powerful man in the world.

He decides to protect his anonymity by calling himself the Oracle and sets up a website with a friend to announce his revelations. It is not long after launching that Will is offered millions by global corporations to share his information.

It is not without consequence though as Will is also making some high powered enemies, including the President of the United States. Hackers are unleashed on the site and the best manhunters are employed to unmask the Oracle. Will is in a race to survive and protect those close to him long enough for him to save the world with his knowledge. 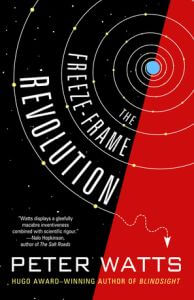 See at Amazon 1: The Freeze-Frame Revolution by Peter Watts This book by Hugo Award-winning author Peter Watts is one of the most brilliant works of his career. A hard science fiction vision of the future told in a thriller style that will keep you turning the pages.

Aboard the ship of the starship Eriophora, Sunday Ahzmundin is hoping to stage a mutiny. The only issue is that they are only awake one day out of a million. The few allies that they have change with each job shift while the enemy they are facing not only never sleeps, but also can see through your eyes and hear through your ears.

In order to stage this mutiny, Sunday will need to rely on the three most important components of any successful revolution: conspiracy, code―and unavoidable casualties. It’s a revolution that could take millions of years to fight as they are on a one-way journey through space, sleeping millennia at a time in suspended animation.

Semiosis: A Novel by Sue Burke : The first book in the Semiosis duology could’ve very easily have placed anywhere on this list. The book made many end of the year lists at other publications and I enjoyed it quite a bit. The book follows a group of colonists from Earth who left searching a perfect home, but instead found a place where their best hope is to survive and that’s before they realize there is another life form watching them.

The Reincarnated Giant: An Anthology of Twenty-First-Century Chinese Science Fiction: I normally like to keep this list to novels, but this anthology out of China is just too good. The stories in this show that the golden age of science fiction is alive in China with stories covering a wide range from space opera to cyberpunk, utopianism to the posthuman, and parodies of China’s rise to deconstructions of the myth of national development.

Head On by John Scalzi : This is a standalone follow-up to Lock In. The book is a classic whodunit in a near-future where a game called Hilketa is growing in popularity. The goal of the game is to take your opponent’s head and carry it through the goalposts. The game is staffed by “threeps,” robot-like bodies controlled by people with Haden’s Syndrome so the game has the brutality without the death. Until a star athlete drops dead on the field. Now, Chris Shane and Leslie Vann are called in to investigate and figure out if this was an accident, or a murder.

The Gone World by Tom Sweterlitsch: A clandestine division within the Naval Criminal Investigative Service assigns Shannon Moss to solve the murder of a Navy SEAL’s family and to located his missing daughter. She’s on her own for the investigation as the missing SEAL was an astronaut aboard the spaceship U.S.S. Libra—a ship assumed lost to the currents of Deep Time. In order to find the missing girl, Shannon will travel forward in time to see possible versions of the future and gain evidence to crack the case in the modern day.

Tell the Machine Goodnight by Katie Williams : Pearl works as a technician for the Apricity Corporation where she works on their happiness machine and helps to make people happy. She’s good at her job and rather successful. Where she doesn’t do her job so well is at home with her own son. Rhett is a sensitive kid who prefers being unhappy. She wants nothing more than to help him, but is it for her sake or his?