Widely regarded as a precursor to much of the detective noir fiction that would come during the latter half of the twentieth century, American writer Raymond Chandler would help popularise the form with his creation of Philip Marlowe. A cynical private-eye in set firmly in the hard-boiled mode, he’d solve cases in his overcoat, setting up much of the iconic imagery that would follow. Taking place in Los Angeles, Chandler was also known for his highly evocative wordplay that was witty and intelligent, giving the stories their distinctive character. Heavily stylized, Marlowe was intended to be in his late thirties to early forties, dealing with various mysteries and investigations that would come his way.

The first full Philip Marlowe title to be released featuring the character would be The Big Sleep in 1939. Prior to this, Chandler would write numerous short-stories for the pulp magazine ‘Black Mask’, many of which he would later apply to the Marlowe series with some name changes. The first of these would be printed in 1933, with the story Blackmailer’s Don’t Shoot, with the lead character initially being called Mallory instead of Marlowe. As a character himself going by the name of Marlowe, he would first appear in the 1934 short-story Finger Man. A final appearance of Marlowe would be seen in the posthumously published book Poodle Springs, which would be released fully in 1988, having only initially completed four chapters, with the rest being completed by the author Robert B. Packer at the request of Chandler’s estate.

Shaping much of modern Hollywood, in particular the film noir genre, the Marlowe series has been regularly adapted over the years. Notably this includes Humphrey Bogart in the lead-role, starring in the 1946 film of ‘The Big Sleep’, along with The Long Goodbye in 1973 starring Elliot Gould. There would also be a television series, as well as numerous radio plays, all covering the back catalogue of Raymond Chandler as a writer. Winning awards, such as the Edgar Award for Best Novel, Chandler is regarded as one of the best of his genre, with the Philip Marlowe series containing many essential highlights over the course of its eight book run.

These are my own personal top five highlights in the series:

Two missing wives are the case for Philip Marlowe, with one of them being the wife of a rich man, whilst the other’s married to a poor man. One wife is believed to have gotten a Mexican divorce in order to marry a gigolo, and the other is now thought to be dead. Doing a job, Marlowe lives for the pay-check, so he’ll see the job through regardless of whether or not he cares for anyone involved.

As a cynical noir fantasy this is pure Chandler, in a straight-forward mystery thriller shrouded in darkness and shadows. Expertly paced throughout, it manages to carry the reader along with its well crafted plot that continually twists and turns. The wordplay is also great, with some excellent witty one-liners that really do stand-out, clearly showing why Chandler was one of the best in the genre. 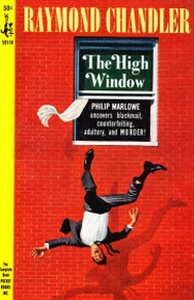 There’s a wealthy Pasadena widow who’s mean and embittered, and her daughter-in-law who’s recently gone missing. Not only that, but there’s a small gold coin that’s worth a fortune that’s somehow connected, leaving Philip Marlowe to come and put the pieces together. Getting entangled in a web of lies, corruption and deceit, he must get to the bottom of the case, discovering the true depths of human depravity whilst he’s down there.

This novel has some great quotes that are pithy and to-the-point, again clearly showing what Chandler does best. Not only that, but the character of Philip Marlowe himself is extremely well established too, as his intelligence and education is juxtaposed against the seedy well-worn backdrop of Los Angeles. This creates some highly memorable moments, giving the story an even greater level of depth, along with its clever use of metaphors throughout. 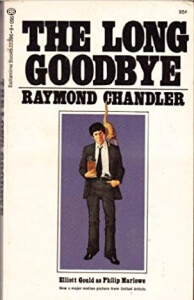 A drunk who’s down-and-out, Terry Lennox needs to get out of LA quick following the sudden death of his now deceased wife. Turning to his friend Marlowe to help get him out of town, he heads down to Mexico, whereby he later turns up dead himself, apparently due to suicide. Marlowe doesn’t believe he killed his wife, and he’s intent on getting to the truth, as he heads in to Idle Valley, where the rich and adulterers mingle, in the hopes and discovering what really happened.

Often with Chandler’s novels it’s the brevity of his statements that work so well, and this is definitely no exception. Extremely clean and concise in its presentation, it manages to get straight to the point, allowing every word to make an impact. This makes for an extremely compelling mystery as well, keeping the reader constantly guessing throughout, right till the last page. 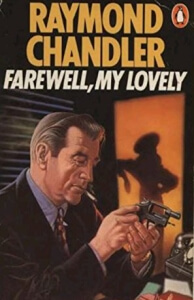 Just about to give up on a seemingly routine case, Marlowe finds himself suddenly thrust into the midst of it all. Caught up in a murder that leads all the way to a jewel thief ring, along with another murder, and even a fortune-teller, and then some more murders. This sees him needing to sort out the fact from the fiction, dealing with the truth as only he knows how, whilst seeing corruption in all its forms.

The story here is solid and, along with the strongly crafted characters, is one of the high-points of the series overall. Every line is drenched in cynical wit, with not one single word going to waste, all whilst evoking a moody and sombre atmosphere throughout. Constantly turning the page, this was a strong entry into the series, with its grimy ambiance and well established characters. 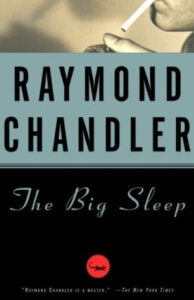 Tasked with finding the whereabouts of Terrance Regan, the missing son-in-law of one General Sternwood, Philip Marlowe believes this to be an open-and-shut case. That’s when he finds he has three murders on his hands, and mobsters constantly watching, with no help from the police being left on his own. Dragged head-first into a world of crime and corruption, he must make his way through the dark and murky underworld if he ever wants to find the truth.

Perhaps one of the best known of the series, there’s a reason this is so popular, as it’s Chandler at his most raw. Showing Marlowe for the first time in novel form, this would really make the most of the character and his setting, giving him a fully grounded feel. The world feels so immersive too, bringing the reader in and allowing them to explore it, getting a real understanding for it as a whole.

Best Books & Series To Read If You Like Philip Marlowe:

Sam Spade: One of the classic characters of the detective noir genre, Sam Spade came prior to Philip Marlowe, being the creation of American writer Dashiell Hammett. Inspiring the works of Raymond Chandler, he’d help lay much of the foundations of what was to come in the years to follow. A private-investigator in the hard-boiled detective mold, Sam Spade’s best known story was ‘The Maltese Falcon’, which was famously adapted into a film of the same name, starring Humphrey Bogart in the lead-role.

Mike Hammer: Written by the American writer Frank Morrison Spillane, aka Mickey Spillane, Private Investigator Mike Hammer was a character set firmly in the mold of the hard-boiled detective noir genre. Returning from the jungles of World War II, he has a brutality about him, as opposed to the cynicism of Marlowe, looking to fight violence any way he can. Films and television shows were adapted from the series, most notably with ‘Kiss Me Deadly’ in 1955, which has since become a classic.

Jane Tennison: Many people are well aware of DCI Jane Tennison thanks to her television portrayal by Helen Mirren for the series ‘Prime Suspect’. The books on which it was based though, are equally well established, with them being written by the British author and screenwriter Lynda La Plante. Detective Chief Inspector Jane Tennison would work for the Greater London Metropolitan Police Service, rising up through the ranks and the patriarchy, all whilst solving various crimes and cases.

Sherlock Holmes: This classic series from British novelist Arthur Conan Doyle was the one that helped start it all with detective fiction. Set in London, Sherlock Holmes was the ever iconic detective, working to solve a variety of cases alongside his sidekick Dr. John Watson. The stories would be continually adapted for a number of different platforms throughout the twentieth century, including film, television, radio, and video-games.

Lisbeth Salander: The lead character in Swedish writer Stieg Larsson’s ‘Millennium’ series, Lisbeth Salander is a top hacker operating in a world of shadows. With an eidetic memory, she seeks to expose wrongdoing alongside investigative reporter Mikael Blomkvist, all set in a pulp driven mystery thriller narrative. Many of the books have been adapted for film and television, both in Sweden and in Hollywood, successfully reaching a worldwide audience.

Entertainment Radio – The Adventures of Philip Marlowe: Providing a selection of older classic radio shows, this series focuses on Philip Marlowe. Dramatizing his mysteries, they make for an interesting listen and historically putting the work into context.

Point Blank: Hardboiled, Noir, & Detective Fiction – The Big Sleep and Raymond Chandler: Looking at the career of Raymond Chandler, the hosts discuss both him and his legacy. Examining the status of the lone detective in modern fiction, they break-down their role through the lens of ‘The Big Sleep’.

Backlisted – The High Window by Raymond Chandler: Casting an eye on one of Chandler’s later Marlowe novels, this is an insightful analysis of ‘The High Window’. It also takes a look at the work of Chandler in general, considering his place in modern detective fiction and Hollywood.