The ‘In Death’ series is written by the American writer Nora Roberts.

As a science-fiction police procedural, Nora Roberts has been writing the ‘In Death’ series for a long time now. Publishing it under the pseudonym of J.D. Robb, it’s set in the near future of the mid-21st century, as it focuses on the NYPSD, or ‘New York City Police and Security Department’. Following the characters of Lieutenant Eve Dallas working alongside her husband Roarke, they reside in New York solving various cases for the police department. The series is fast approaching fifty novels in total, and Roberts has stated that she’ll end with the pregnancy of Dallas; her lead character.

The first book to come out in the series was Naked in Death, which was released in 1995, and was followed up later that same year with the novel Glory in Death. This is where Eve Dallas is introduced to the businessman Roarke for the first time, as he’s the suspect in the murder of a high-profile prostitute. Set in 2058, Dallas is tasked with finding the murderer of Sharon DeBlass, who is a legal companion, and also the granddaughter of a prominent senator. She is helped by her assistant Dr. Charlotte Mira, a character who becomes a recurring friend over the course of the series.

Whilst the franchise hasn’t been adapted for the screen as of yet, it is episodic in its nature, with it following all the beats of the police procedural, along with elements of romance, making it an interesting combination. Winning awards, Roberts received the ‘RITA Romantic Suspense’ prize in 2006 for Survivor in Death, and again in 2012 for New York to Dallas. With ten novellas in the series, there’s plenty of highlights to this particular franchise, as it has continually reached bestseller status worldwide.

In my own personal opinion, this is what I believe the top five titles in the In Death series so far are: 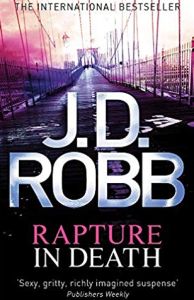 Three highly prominent people have apparently committed suicide; a well known lawyer, a gifted engineer, and a politician mired in controversy. Dying with smiles on their faces, the whole case seems suspicious, especially as they had everything to live for with no clear problems. That’s when Eve Dallas notices a small burn on each of their brains during their autopsies, leading her into the realm of virtual reality and pleasure seekers.

Using the futuristic tech to solve traditional mysteries, this is a great entry in to the series, providing a good solid thriller. With plenty of twists and turns, it really has a sense of imagination to it, taking the genre in new and fun directions. Its character arcs are also well developed too, making this not only enjoyable for fans of the genre, but also a must for followers of the series as well. 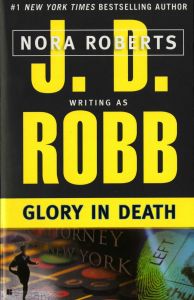 Set in 2058, most hereditary genetic traits leading to violence and brutality are weeded out prior to them taking over. That doesn’t mean that violent crime don’t still take place though, as Eve Dallas finds when linking the murders of two successful and powerful women. Connecting these murders to equally powerful men, it would seem that there’s a list of suspects related to their deaths, including that of Roarke, Eve’s lover.

Entangling herself in the mystery, Eve Dallas dives straight in to the heart of the investigation, finding herself completely submerged in it. Working within shades of grey as all the great thrillers do, this really finds interesting ground to cover within its subject matter. Providing a sense of escapism too, Roberts manages to balance all the elements throughout this taut and highly effective thriller. 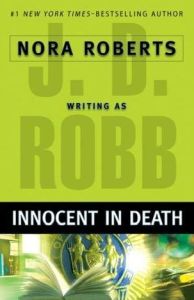 The seemingly inoffensive history teacher Craig Foster is poisoned at work, as he’s shockingly discovered dead by his young students. Meanwhile Eve Dallas is attempting to keep herself focused on the case, all whilst a manipulative ex of her husband Roarke has turned up on the scene. Balancing the two, Dallas must get to the bottom of the case, examining who amongst Foster’s colleagues could be capable of such a thing.

With the drama of the relationship already in full swing, this being number twenty-seven in the series, there’s plenty of elements for readers to sink their teeth in to here. At the heart of it, though, is the mystery once again, and it’s definitely one confidently written by a writer at the peak of her game. Providing twists and turns on every page, this efficiently juggles mystery with character development, never sacrificing one for the other. 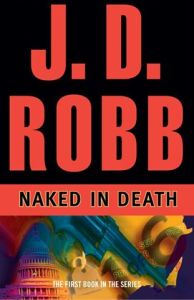 Introducing Eve Dallas for the very first time, this is the one where it all began. Starting out in the year 2058 technology pretty much rules anything, but Dallas still listens to her heart, knowing exactly when to use her intuition. That’s when she has this tested after the murder of a senator’s daughter, which uncovers the prostitution ring she was working within, leading to Eve’s first suspect; the businessman Roarke.

A highly efficient and audacious beginning that throws readers directly in to the world, making them live and breathe it. It would also introduce the relationship between Dallas and Roarke for the first time too, making it integral to the plot of the book. This really allows readers to understand who Dallas is as a character, whilst also keeping them guessing throughout the mystery. 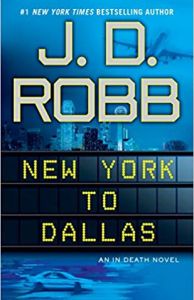 A ghost has turned up out of Eve Dallas’s past, as one of the first men she put away as a rookie NY cop has broken free from jail. The sadistic pedophile Isaac McQueen is on the loose and he’s heading to Dallas in Texas where he’s focused on revenge and punishing more young girls he sees of as ‘bad’. On his trail is Dallas with Roarke in tow, as she heads back to the place where she killed her own monster at the young age of eight.

Hard-hitting and direct, this title doesn’t pull any punches, in what is the thirty-third entry of the series. Dealing with heavier themes, it manages to really develop the character of Dallas and where she’s come from as a person. Working as a thriller it definitely doesn’t shy away from its subject matter, making for a highly effective and chilling mystery read.

Best Books & Series To Read If You Like In Death:

Fatal: Bringing mystery and romance together, this is the Metropolitan Police Department as seen through the eyes of American author Marie Force. Following the character of police detective Sam Holland, it sees her serving the area of Washington D.C., whilst also kindling a romance between her and Senator Nick Cappuano. This continues throughout the series, reflecting the relationship of ‘In Death’, along with a mystery to investigate with each title.

Grant County: Taking place in the fictional small town of Heartsdale, Georgia, which is also in the fictional region of Grant County, this series from Karin Slaughter follows three main characters. Featuring detective Lena Adams, her boss the chief of police Jeffrey Tolliver, and his wife Sara Linton, who is both the part-time coroner and pediatrician for the town. Dealing with serial-killers and murders, they must work together to solve the cases, although sometimes their styles clash in this series of suspense fuelled thrillers.

Kate Shugak: An ex-DA investigator and native to Alaska, Kate Shugak is a complete antithesis to the futurism found in the In Death novels. With the series author Dana Stabenow also hailing from Alaska, the stories are very much ingrained in the desolate setting of the area. Solving cases, Shugak is a strong character who use her wits to solve mysteries, falling back on more traditional methods as opposed to technology.

Rivers of London: Mixing the paranormal with police procedural, this is another genre hybrid series, this time from British writer Ben Aaronovitch. Also known as the Peter Grant series, it follows the eponymous detective who can commune with the dead, an ability which sees him working for the London Metropolitan Police in their secretive supernatural and magic department. With the action happening in a fantastical vision of London, this is a series that really comes to life, as Grant solves mysteries using his powers.

Kinsey Millhone Alphabet Mysteries: Set in the 1980s, this series follows the character of Kinsey Millhone, a private detective in her thirties, who solves mysteries and crimes. Each title in the series relates to a letter of the alphabet, and the writer, Sue Grafton, would reach Y during her lifetime. Putting a lot of herself in to her character, Grafton would use Millhone as her alter-ego, as she is a strong and resourceful individual, much like Eve Dallas.

The Romantic Suspense Insider – J.D. Robb’s Apprentice In Death: Looking at the romantic suspense genre as an art-form, this analyses what it is that makes the In Death novels work. Providing a unique take on the series, this gives some interesting breakdowns of the franchise as a whole.

Academic in Death – Dr. Kecia Ali: Speaking to the scholar Dr. Kecia Ali, this takes a look at her book ‘Human in Death’, which is a breakdown of what the series has come to mean over fifty novels. Talking about her work, this provides an in-depth analysis of the series, looking at it from an academic perspective.

The Page Turner – Naked in Death by J.D. Robb: This focuses on the first book in the series ‘Naked in Death’, reviewing it in a straightforward manner. Looking at it neutrally, the hosts examine what the book means to them, along with its characters and narrative.

My favorite “In Death” book is Treachery In Death