Jack Reacher is one of the most popular characters in the modern day book world.

The first novel in the series, Killing Floor, was released in 1997. It was an instant hit – winning multiple awards such as an Anthony Award and a Barry Award both for Best First Novel.

The series is written by Lee Child exclusively up until 2020, with usually one new book released every year. In 2020 he began to hand the reins of the series over to his brother Andrew Grant. Andrew is writing under the name Andrew Child and will co-author with Lee on a few books, before taking over the series as his own.

The Jack Reacher series has spawned two movies featuring Tom Cruise, and a television show that will be airing on Amazon Prime.

More importantly however – the Jack Reacher series has spawned many copycats. We’re seeing both new and existing authors realizing the popularity of the series and attempting to create their own fictional superhero.

I’ve read many books that you would consider a “Jack Reacher clone” and within this list I’m going to recommend some book series based on if you like Jack Reacher.

Please note that you will see many “If you like Jack Reacher” articles out there; however I feel the majority of them are lists of Reacher copycats without actually reading the books themselves. As a big fan of the Jack Reacher series, I make sure to read through every single book in a “Reacher copycat” series and only if I feel do they match the long term quality of Lee Child do I actually add them to this list.

There’s also a Reacher “vibe” that I need to include in this list below. For example – the Mitch Rapp series. Much like Reacher, Rapp is a badass who can take everyone out and you can trust will always do the job. However his books are more spy thrillers and political thrillers, and while great books in their own right, I don’t feel really belong on this list. I’m a bit picky hehe. (Although you really should read that series!)

Here’s the book series that have made this list so far and I am constantly updating it when I discover a new book series. 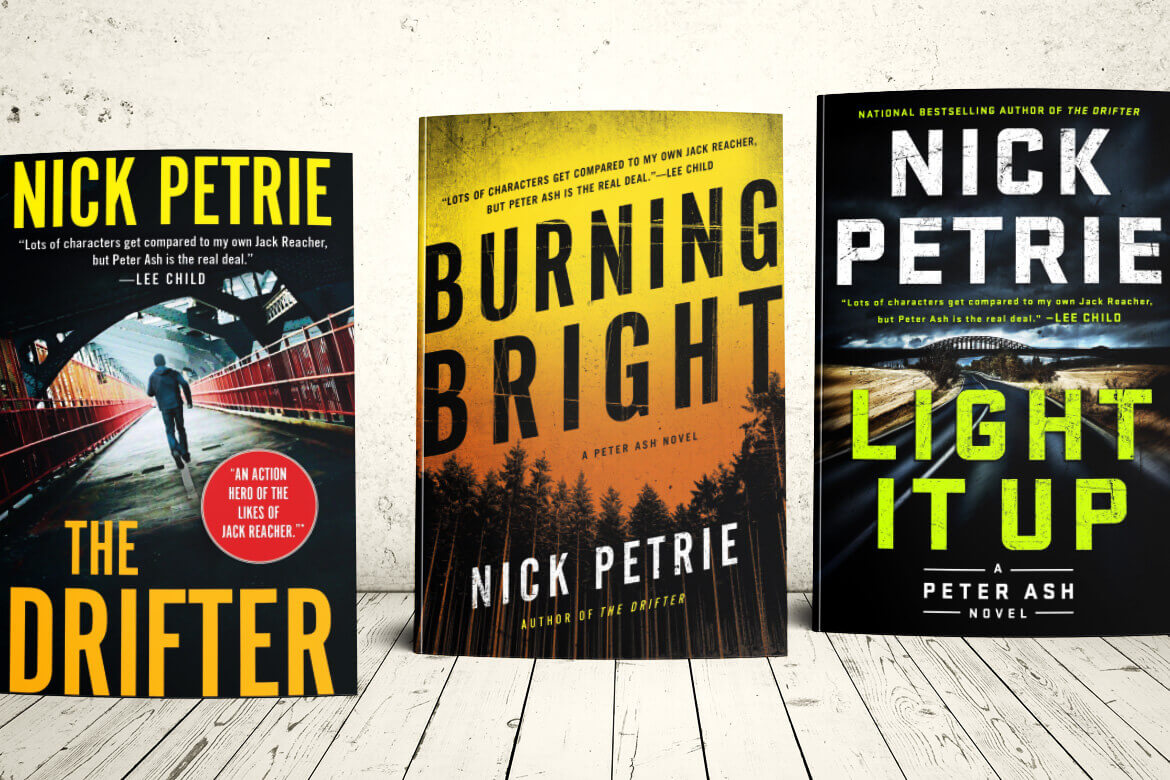 I’m going to put this one at the very top of my list. Everyone knows me as the bookworm and they always come to me for recommendations. Many of my friends are big fans of Jack Reacher and are always asking for more books like that.

Never have I recommended a series that has received so much positive feedback as this one. Lee Child even said ““Lots of characters get compared to my own Jack Reacher, but Petrie’s Peter Ash is the real deal.” and he is totally correct in that assessment.

The Peter Ash series began in 2016 with The Drifter. Peter has returned home from wars in the Middle East however suffers from PTSD; it’s a very odd white static when he gets claustraophobic. This sets him up drifting about in nature, and sleeping outside with the stars as his roof.

One of his friends from the marines has committed suicide and so Peter Ash decided to show up at his widows’ house and help her out by repairing her home. However while working on her home he discovered a suitcase that is full of money and explosives. Much like a Reacher novel; one little thing leads to Ash getting involved in something big and he can’t ignore it or move on until it’s resolved.

What I really like about this series is Ash isn’t a complete loner like Reacher; he picks up a few friends along the way that end up showing up in later books. It’s nice to have that and adds some cohesiveness to the series.

If you’re a fan of Jack Reacher and looking to read a similar book series, this is the one I would recommend first. 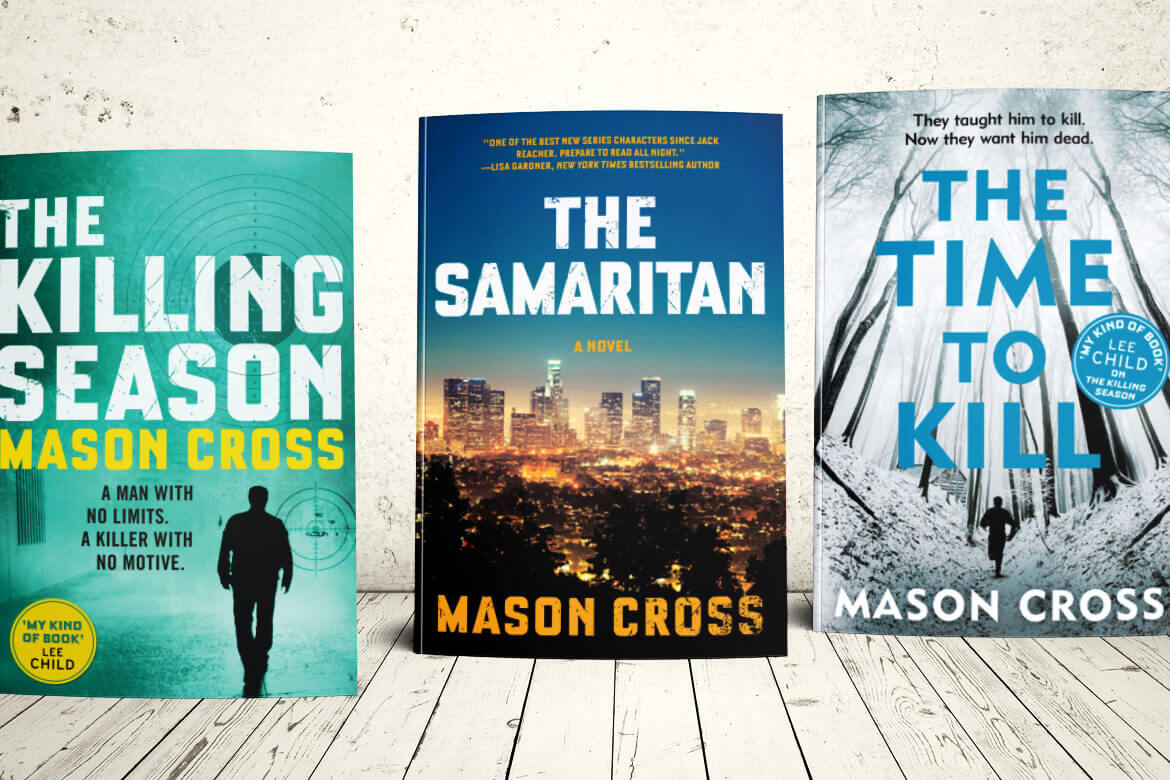 This is an interesting series because it actually has a few key problems in the first two books; I stayed iwth the series despite the problems as the story and writing were excellent. I was glad I stuck with it as Book 3 onwards are problem free and absolutely tremendous books.

The series starts in 2017 with The Killing Season. The infamous “Chicago Sniper” has escaped from death row and is out there in the USA killing people again. Enter Carter Blake. Carter is much like Reacher in terms of physical ability and also queit tones. His job is to find people and that’s why he is here – to find the Chicago Sniper and stop his path of destruction.

The only issue I had with this series was the narration and perspective; in the first two books everyone “speaks” in first person. However there is no set structure within the chapters. So 3 chapters may feature Carter Blake as the narrator then it will switch to someone elses perspective yet it isn’t clear enough and you’re left thinking it is Carter Blake talking for the first few paragraphs.

Luckily this is something the author clearly recognized; book 3 onwards has Carter in first person and everyone else in third person and then he also started adding in the name of the character before each chapter. That’s something I really loved to see; an author who is able to adjust his writing style completely. That’s quite rare and I am sooooo happy he went that route as it makes his books practically flawless.

Another excellent series if you like Jack Reacher with Carter always traveling to different cities across America. 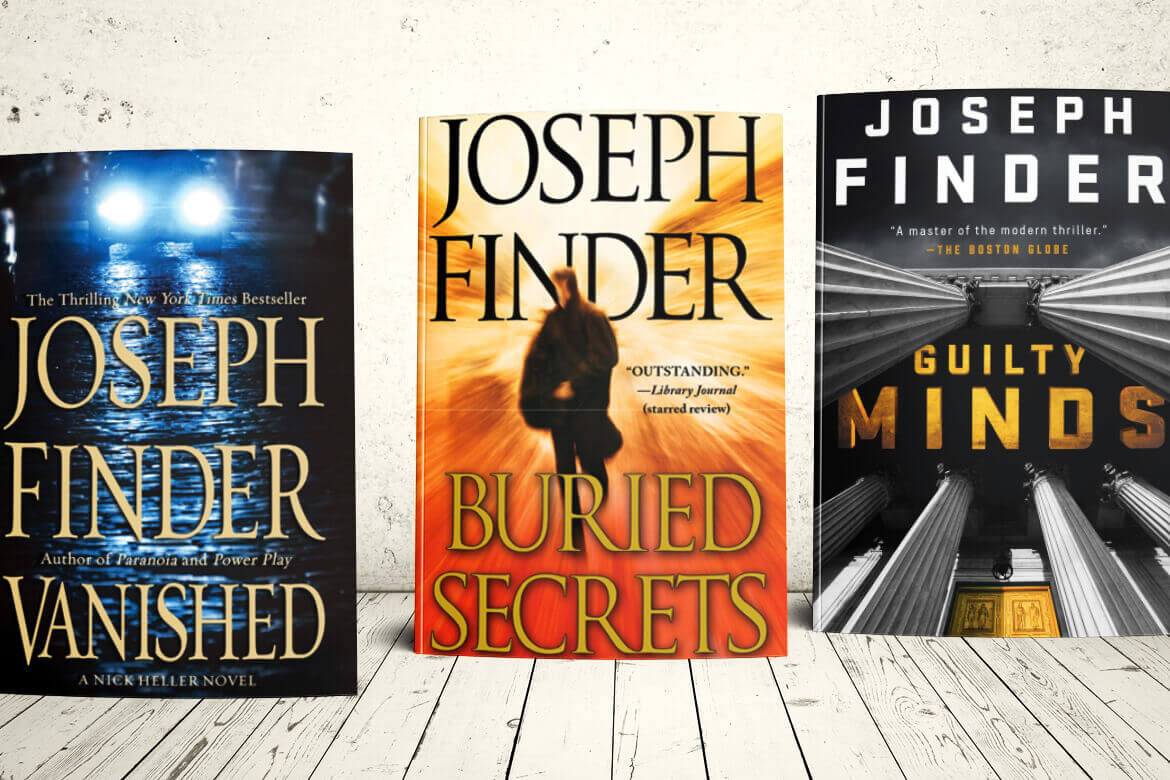 I wrote above that many existing authors decided to have a crack at their own Jack Reacher character. One who had some real success with it is the author Joseph Finder.

Prior to 2009, Joseph Finder only wrote standalone novels. In 2009 he decided to take a shot at a “Reacher” character and it was very successful in my opinion.

The first book in the Nick Heller series is called Vanished. Unlike other authors he doesn’t force the Heller books down our throats. In 11 years there were only 4 books released. Finder clearly only wants to write a Nick Heller novel when he has a unique idea that would work for the character and it makes for great books.

Nick was trained in the special forces and is now an investigator. In the first book, Nicks brother has disappeared after being mugged while out with his wife. Nick hasn’t talked to his brother in years but has to drop everything to find out what exactly happened to his brother.

In the anthology FaceOff, there is actually a short story written by Lee Child and Joseph Finder where the two meet up in a bar.

The Nick Heller series is another excellent series if you like Jack Reacher; with a very good mystery element to it and lots of twists and turns.

Obviously there are many more book series to recommend if you like Jack Reacher. Those are the three main ones I would recommend although I’m open to adding to the list. If there are other series you would suggest then add them in the comments below. If I feel they should be included I will; and if I’m not personally a fan or don’t think they fall into the “If You Like Reacher” category I will let you know why! In some cases it may just be that I have not read every book in that series yet.

Thanks so much for reading and I hope you find some good book series from this list if you like Jack Reacher.

Just to straighten one thing out. The first Reacher book “Killing Floor” was published and released in 1997, not 2017

someone told me about a series, similar to the Jack REacher series, but it had a female lead. Would you have any idea as to what those books might be?

Hmmm do you have anything else to go on? There’s a few women who would fall into that category. The Jane Hawk series by Dean Koontz was referred to as that is one that I can think of off the top of my head.

The series you are querying about could be Charlie Fox by Zoe Sharp. The first in the series has an amusing foreword by Lee Child.

I am ordering The Drifter and can’t wait to read it and see if I enjoy it too. I am a pretty big reader but not 1 book a day like yourself, usually my favorite authors I read within 12 hours. With that being said I am on this quest to find great mystery books that are not filled with profanity. One of the reasons I love reading Lee Child. I have even noticed my go to authors are using the f-word more and more. Just to give you an idea of some of the authors I love reading are Alex Kava, Brad Thor, Lisa Gardner, Tami Hoag, Robert Crais (love him), Catherine Coulter, Clive Cussler and many more. Can you recommend some books that are light on the profanity but heavy on the action?

Thanks for replying Mindy. I really hope you enjoy it! I loved the first four books in that series. In the 5th book Peter went to Iceland and I didn’t enjoy it as much. I struggled a bit with the sixth book but it got good near the end.

I’ll be honest – I’m someone that never really notices profanity in a book, so I am not a great resource for that! My friend has a good list though perhaps you can find something here: https://www.orderofbooks.com/top-lists/top-clean-series/

On your suggestion I purchased the first book of both the Peter Ash and Carter Blake novels. I ended up blowing through the entire series of both and now have ordered all of the Nick Heller books. (Though I haven’t started that series yet.) Amazingly good call on your part. Reacher is still my favorite series, but these are great books. Thanks for the tip.

Hi John – thank you for the feedback, I truly appreciated that and am so glad you have enjoyed them 🙂 Hopefully Mason Cross gets back to writing that series soon! Just an FYI – he has also started writing under the name MJ Cross AND Alex Knight. He has three standalone novels under those pseudonyms. I haven’t read them yet but hopefully will soon. You can see those listed at this site: https://www.bookseriesinorder.com/mason-cross/

I already finished What She Saw Last Night. Loved it. But what really sealed my love for Mason Cross was The last Cater Blake book. I was certain part-way through that I had it all figured out and that he got lazy. BLEW MY MIND!
What I don’t get is why he’d use so many different names when his brand is hot. (Cross, not Blake).

Several books by Patrick Lee might also appeal. Reacher stuff along with fantasy elements. They were one of the influences on me when I wrote “The Girl with the In-Sight.”

Yes! I love Patrick Lee as well they are great recommendations.