As intelligent as he was prescient, Arthur Charles Clarke was an articulate British voice, making his start during the Golden Age of science-fiction. Making his name during the latter part of the period, he would rise to prominence in the 1950s, setting himself apart as a visionary novelist, often with utopian ideals. Building interplanetary worlds, he would create his frontiers with a great degree of scientific accuracy and foresight, never forgetting to inflect it with an underpinning of dry humor and warm wit. Looking to the future, he’d successfully predict a number of innovations throughout the twentieth century, including the internet, all whilst change the landscape of modern science-fiction as we know it.

With humble beginnings writing in various different fanzines from 1937 into 1945, Clarke would see his first science-fiction short-story Loophole released in 1946. Published through ‘Astounding Science Fiction,’ his following short-story, Rescue Party, would also come out through the same magazine just one month later. It was later in 1948 that he would submit his short-story The Sentinel to a BBC competition and, although this would be rejected, would go on to form the basis of his infamous 1968 novel 2001: A Space Odyssey.

Working with the director Stanley Kubrick whilst writing it, they’d also release the film adaptation that same year, which itself would revolutionize science-fiction cinema. He’d also go on to write the follow-up 2010: Odyssey Two in 1982, which would also be made into a film in 1984, and then 2061: Odyssey Three in 1987, and 3001: The Final Odyssey in 1997. The first novel that Clarke would release was Against the Fall of Night in 1948, and he would come a long way over the years. This growing popularity would lead to him being named as one of the ‘Big Three,’ alongside fellow science-fiction writers Isaac Asimov and Robert A. Heinlein.

Regularly appearing on television, too, he’d present different shows looking at the wonders of the universe; a theme which was reflected in his own writing. He’d also produce a number of essays further elaborating upon his ideas, as well as receiving awards, going on to have an award named in his honor in 1987, given to new up-and-coming science-fiction authors. His fiction has also been recognized by the science community at large too, with an asteroid and meteor being named after him. Recognized around the world to this day, he left behind a strong body of work with many notable career highlights.

My own favorite five Arthur C. Clarke novels are ranked as such: 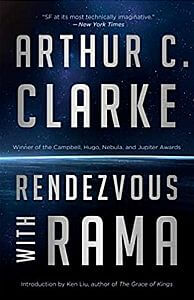 Flying through space at an increasingly rapid rate, a huge celestial object weighing over ten trillion tonnes is heading towards Earth, and astronomers have dubbed it Rama. It soon transpires, though, that this object is actually a space vessel, and aboard is alien life as humanity prepares for first contact. Scientists prepare themselves ready to meet the Ramans as the planet finds itself on the epoch of change, awaiting their arrival.

There are so many questions in this book, with its thought-provoking premise that really engages when reading. It has so many layers to it, making for an extremely involving and immersive experience that fully draws the reader into its world. Paying close attention to detail, too, Clarke has made the whole thing entirely believable, giving a real sense of authenticity. 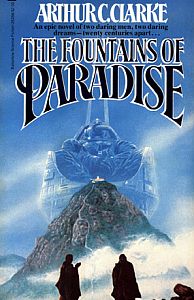 Looking to link Earth with the stars, Vannemar Morgan dreams of building a massive elevator reaching into space. Set to extend 24,000 miles high, he hopes to do everything in his power to achieve his goal as he attempts to navigate the various different political and social issues of the day. This is contrasted with the efforts of a Sri Lankan king thousands of years prior, who would build a palace atop a huge mountain.

Making his intentions clear, Clarke does an expert job of handling the different narratives, showing the message behind his story. This works extremely well, making for an engaging read that really has everything, as it’s a testament to the ambition of humankind. Literally reaching for the stars, it’s an imaginative story with a lot going on, with strong characters at the heart of it grounding the narrative. 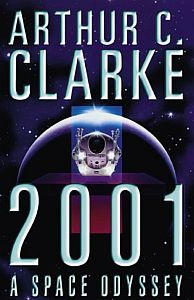 Posing a mystery, an enigma is uncovered from the Moon, as it appears a large black slab signifying alien intelligence is there. Sending a signal to Saturn, a mission is sent out in the form of Discovery One, as Dr. David Bowman along with Dr. Frank Poole are the only conscious minds awake, with everyone else in suspended animation and HAL 9000 the ship’s AI computer at the helm. Their journey will be long, though, as loyalties are tested, with them drawing ever nearer to the end goal of uncovering one of humanity’s greatest mysteries.

Many people will also remember the Stanley Kubrick film, which came out the same year, as they accompany each other, this being written at the same time. It’s a classic story, though, as it shows a definite shift in science-fiction and what it can do as a genre, delivering some extremely profound ideas. The story is eye-opening, and there’s a lot to unpack here, as it sets itself apart from anything and everything else, making for a wholly singular and exciting piece of work. 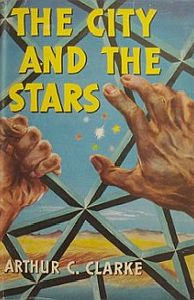 Shutting out the world outside, the city of Diaspar is sheltered by a huge dome that’s protected humanity’s last refuge for over a millennia. Beyond the dome is decay where once humanity ruled, but alien invaders then came, and the humans retreated according to the legends. Now it seems that one individual known as a Unique has found a way to awake humanity from its inertia and find out the truth of the invaders beyond.

There’s a lot to be gleaned from this novel, with layers of meaning lurking just beneath the surface of its creative and imaginative world. Using many metaphors to explore the nature of society and humanity in general, it really is an interesting story with a lot to offer. The book contains so much intrigue allowing the reader to ask deeper questions, as well as evoking a real sense of wonder in the world it creates. 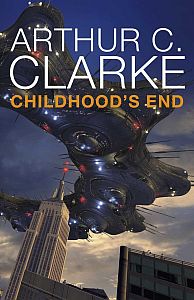 Appearing over every major city across the planet, a race of alien Overlords demand that humanity change its ways, ending poverty and bringing about peace and unification. These seemingly benevolent beings are far superior to the human race in every way, both in terms of technology and intellectual capacity. It soon becomes transparent that they may have another agenda, though, as all of civilization comes to a crossroads, with the intention of the Overlords soon to make itself known.

Hailed as a masterpiece of the science-fiction genre by many, including by the renowned writer Kurt Vonnegut, this truly lives up to its praise. There’s so much attention to detail here, as everything is accounted for when it comes to analyzing the trajectory of humanity. Epic, in both its sense of scale and the ideas it poses, it’s a testament to human imagination, and it’s an alien invasion novel that doesn’t fall back on familiar and easy tropes.

Best Authors To Read If You Like Arthur C. Clarke:

Isaac Asimov: Very much a contemporary of Arthur C. Clarke, the two of them would meet, making a pact between them on how they’d speak about each other to the press. Along with Heinlein, the three authors would come to be known as the ‘the big three’ in the world of science-fiction, with Clarke and Asimov mutually respecting one another. When asked who was the better science-fiction writer by interviewers, they’d say Clarke was better at writing science-fiction, and Asimov was better at writing science, and this would come to be called as the ‘Clarke-Asimov Treaty.’

Kim Stanley Robinson: Largely known for his ‘Mars Trilogy,’ Kim Stanley Robinson is an American science-fiction author highly regarded for his more utopian outlook. Studying different political structures and ideals through his writing, he had a very detailed, nuanced view of the worlds he was creating. This would inspire readers from around the world as, much like Clarke, his writing would contain a lot of strong ideas and viewpoints, speculating about the future of humanity.

Robert Heinlein: Another of ‘the big three’ in terms of science-fiction, Robert Heinlein was known for bringing a more militant sense to his writing. An imaginative and intelligent writer, he was known for infusing his politics into his work which, while pretty conservative in many respects, were also socially progressive, criticizing such things as racial segregation during the 1950s. This made him an engaging writer for many, and he would come to produce a number of different stories that got taken up by different sections of society.

Ursula K. Le Guin: Writing both science-fiction and fantasy, Ursula K. Le Guin was very much a writer of big ideas and interesting concepts. A lot of her work would really shape both genres, as she would always have something to say at the heart of her stories, similar to Clarke. Taking a progressive viewpoint on many issues, her work would reflect this, often depicting utopian societies and ideals.

Philip K. Dick: Bending the concept of reality itself, Philip K. Dick was an extremely talented and highly versatile author during his lifetime. While Clarke would opt for the big worldly ideas, K. Dick would gravitate towards the more internal when it came to his books. There were also many adaptations of his work too, with films such as 1982’s ‘Blade Runner,’ which would set the template for science-fiction cinema for decades to follow.