Changing the face of science-fiction for generations to come, Kurt Vonnegut would reinvent how we viewed the genre over the duration of his fifty year long writing career. Writing in a self-aware style with wit and intelligence, he would touch on deeper ideas and feelings, often looking at his own experiences through the lens of science-fiction. One particularly famous example of this would be his 1969 novel Slaughterhouse-Five, which would use the genre in a meta-fiction narrative to examine his own time spent during the Second World War. Experiencing the firebombing of Dresden first-hand, he’d spent time as a prisoner-of-war before getting out, an ordeal which would come to define much of his work.

Prior to becoming a novelist, Vonnegut would work in copywriting, a career that would define him and his outlook on his craft in the years to follow. This influence is especially prevalent in his 1973 novel Breakfast of Champions, with the title itself being a slogan from an older ‘Wheaties’ breakfast cereal commercial. He would also feature many other recurring themes and ideas, including characters such as the omniscient Kilgore Trout; a writer of low-grade pulp science-fiction novels, whom many have speculated as being an alter-ego for Kurt himself. It would be in 1952 that he would write his first novel titled Player Piano, which would clearly display his penchant for sharply observed satire in an anti-Utopian dystopia set in an automated future. Setting up many of his core ideas as well, it would look at the concept of the outsider asking some of the larger more philosophical questions; ones that those within society may have difficulty asking.

There would be various cinematic adaptations of Vonnegut’s work, with shorter films and feature-length movies produced from his novels. Included in this was the 1972 film Slaughterhouse-Five, which would be directed by George Roy Hill, and Breakfast of Champions in 1999 directed by Alan Rudolph. In 2013 the director Guillermo del Toro would express interest in directing Slaughterhouse-Five with Charlie Kaufman penning the script. With most of his novels overall, though, it is the meta-textual and fractured nature of Kurt’s work that has proven so difficult to adapt over the years. Regardless, this idiosyncratic style of his would prove to be hugely successful, winning him awards from the outset, from the ‘International Fantasy Award’ in 1953 for his first novel ‘Player Piano’, right up to 2015 when the Science Fiction Museum would posthumously award him a place in their ‘Science Fiction and Fantasy Hall of Fame’. Leaving behind a legacy that is still felt to this day, there are many career highlights throughout his collection of work spanning fourteen novels, three collections of short-stories, five non-fiction titles, and five plays, with many previously unpublished works continuing to be released.

Over the course of his entire career, these are my own personal top five highlights: 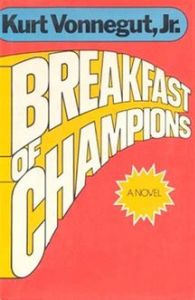 Writing countless novels for a mass-market, the pulp science-fiction author Kilgore Trout is himself mostly ignored by the public at large. That’s when it transpires that there’s a Midwest car dealer named Dwayne Hoover taking his fiction as truth, as the wealthy businessman is becoming increasingly unstable. With messages from the ‘Creator of the Universe’, the story is essentially a comment on itself, in what is Vonnegut’s last novel, bringing together his career in a post-modern self referential narrative.

Also known as ‘Goodbye Blue Monday’, Kurt Vonnegut himself was fairly unhappy with the novel, which isn’t to say that it isn’t without merit. Highly influential, it would see him as a writer essentially ‘clearing out’ many of his ideas, putting them all in to one sprawling meta-narrative. Broken and fractured commenting on a whole range of contemporary issues, such as racism, mental health and cruelty, there would be an attempt to film the book with an adaptation in 1999, although this was largely seen as unsuccessful, mainly due to the difficulty presented with bringing the story to screen. 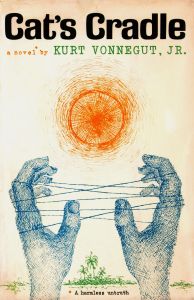 Leaving a deadly legacy upon the world, Dr. Felix Hoenikker is one of the founding fathers of the atomic bomb. His latest discovery consists of a highly deadly chemical, one that’s capable of freezing the whole world, and is called ‘ice-nine’. This leads to a journey for the fabled invention, featuring Hoenikker’s eccentric children, a crazy Caribbean dictator, and general insanity all round.

As a satire of the arm’s race, this is a powerful look at a whole range of different issues, further displaying the true breadth of Vonnegut’s imaginative prowess. Set around the Cold War and the threat of complete nuclear destruction, it really does capture the feeling and essence of the period in which it was initially released. Looking at scientific discovery too, it also encompasses the quest for knowledge, as Vonnegut would base Hoenikker on his own brother, the scientist Bernard Vonnegut. 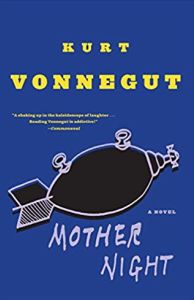 Now facing trial in Israel, the former playwright and Nazi propagandist Howard W. Campbell is about to be tried as a war criminal. The question of his guilt remains though, as nobody is sure just how complicit he was during the war, especially as it begins to transpire that he could’ve been working as a spy. It is himself that he must deal with, though, as Campbell begins to question his own actions and what’s lead him up to this point.

As a satirical piece of meta-fiction, this darkly funny book on the morality of war and what’s sacrificed in its name, is both poignant and hilarious. Clever and astute, Vonnegut touches on a number of deeper philosophical ideas with expert precision, delving into the darker recesses of the human psyche. With reflections on the nature of war referencing his own experience of it, Vonnegut manages to make this subtle and intelligent book engaging and entertaining to read, something which would be difficult in less skilled hands given the tough subject matter. 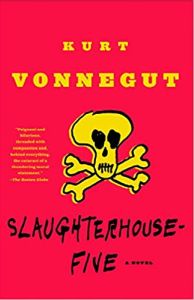 Billy Pilgrim has become unstuck in time; this itself being a nonchalant line in the book giving the overall tone of the work in one single pithy sentence. Through time-travel, Billy Pilgrim finds himself shifting between the distant planet Tralfamadore and the Dresden bombing down on Earth. Experiencing time non-linearly, he deals with the horrors of war, as the alien race provide him with their own fatalistic world view, giving him the all defining response ‘so it goes’.

One of Vonnegut’s most widely known books, this saw him make a name for himself as one of the most important writers of the twentieth century. Dealing with difficult subject matter again, this time focusing on the Dresden bombing and the events surrounding it during World War 2, he avoids sentimentality, but provides a touching portrayal of the horrors of war. What’s especially impressive is that he does this through the lens of science-fiction, infusing comedy that really connects with the reader. 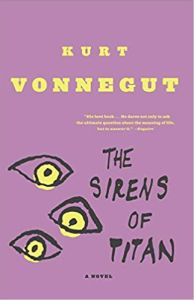 Given the opportunity of a lifetime, Malachi Constant is not only the most depraved and richest man on Earth, but he also now has the chance to head off across time and space accompanied by a beautiful woman. His journey to the far off land has a catch though, as he soon finds himself caught up in an interplanetary war of epic proportions. Witnessing a prophetic vision, he soon begins to understand the true purpose of human existence, bringing in the planet of Tralfamadore for the first time too.

Using black comedy again, this leans heavily on the science-fiction aspect of the story, answering some of the bigger more fundamental questions facing humanity. Whilst it’s an early novel, all the classic hallmarks of what makes Vonnegut truly great are clearly evident here throughout. Daring to answer some of the tougher questions posed by our own existence, he deals with them in a wry and witty manner, getting straight to the heart of it all.

Best Authors To Read If You Like Kurt Vonnegut:

Philip K. Dick: Known for his highly imaginative stories, Philip K. Dick really took the genre of science-fiction to exciting new heights during his literary career. Featuring bold concepts and extremely creative ideas, his novels influenced the form as a whole, taking it in new and interesting directions. Saying something through his work too, he’d always have a clear message, as his work regularly caught the attention of Hollywood, with classic films such as Blade Runner, adapted from his novels.

Margaret Atwood: Whilst she is a lot more serious in tone than Vonnegut, Margaret Atwood also comments on contemporary issues through the lens of science-fiction. Her novel ‘The Handmaid’s Tale’ is one of her most widely known works, having been adapted into a television series, as it comments on society from a feminist perspective. Powerful and intelligent, she provides strong warnings through her dystopian parables, capturing a whole range of compelling themes and ideas.

Haruki Murakami: Similarly whimsical to Vonnegut, Murakami takes big ideas putting them into surrealistic prose that’s ambiguous in its nature. Inspired by Kurt, amongst many other Western writers such as Raymond Chandler too, he combines genres to create a style that’s wholly unique to him. He’s also been heavily influenced by the work of Franz Kafka, writing texts that are allegorical, often with themes of loneliness and alienation.

George Saunders: A contemporary of Kurt Vonnegut in essence, Saunders has a strong satirical streak running all throughout his work. Winning numerous awards, his novels are difficult to define much like the stories of Kurt Vonnegut over the course of his career. It is his sense-of-humor that also shines through, as he brings a playful sense to his writing, whilst not undercutting many of the more serious themes running throughout.

Terry Pratchett: Whilst this may not seem so obvious to some, Pratchett, like Vonnegut with the science-fiction genre, would take the fantasy novel and use it to put a message across. Employing humor in his satirical stories, also similar to Kurt, Pratchett would transpose a lot of contemporary themes and issues into his fantastical world of Discworld. Through his work you can see how the genre novel can be used to say something personal and unique, creating something entirely new in the process.

World Book Club – Kurt Vonnegut:Largely speaking on his novel Slaughterhouse-Five, Kurt Vonnegut answers a range of questions from the studio audience in this illuminating interview. Personal and direct, it’s a fascinating insight into who he is as a writer.

The History of Literature – Kurt Vonnegut: Looking at the life and work of Kurt Vonnegut through his short-story ‘Harrison Bergeron’, this breaks down the overall career of the man. It also examines his many ideas in a fun and entertaining way.

Geek’s Guide to the Galaxy – Kurt Vonnegut: Speaking to the writer Ginger Strand, the interview looks at her book ‘The Brother’s Vonnegut’, which examines Kurt’s relationship with his brother Bernard. With Bernard already being a famous MIT wartime scientist, this documents Kurt stepping out of the shadow of his older brother.