Instantly recognizable to many, the name of Tom Clancy has become a brand in its own right, with it being synonymous with a certain type of American technological-thriller and espionage novel. From films to television, his legacy lives on, including in the world of video-games where his name leads a number of popular titles and franchises which continue to sell at an increasingly rapid rate. It’s his novels and stories for which he’ll be best remembered though, as he pioneered a style of all out action-thriller, especially paying close attention to the military-science. This would see him become highly regarded for his authenticity, even when he broached the realms of science-fiction with the technological aspect, as it always felt wholly real and grounded.

The debut novel to come from Tom Clancy was The Hunt for Red October, which came out in 1984, and was later made into a film starring Sean Connery in 1990. This would also become the fourth chronological title in the Jack Ryan series, a franchise which has been adapted on numerous occasion with films, television shows and video-games made starring the fictional US Marine.

Other series he would help create would be the Splinter Cell series, starting with Splinter Cell in 2002, which he’d write alongside fellow author David Michaels, and would become it’s own line of video-games later on. Many of these series have continued in his name, with the books themselves being attached to other writers, such as his novel Ghost Recon, which he’d write with Michaels again, this time in 2008, as it would go on to inspire a franchise of the same name. Largely writing from an American perspective, Clancy’s novels featured geopolitics and global thrillers that came from the Cold War era, but still remain contemporary and relevant today.

Over the years Tom Clancy has been adapted heavily, with many mediums using his brand for their work, such as films like 1992’s Patriot Games from the 1987 novel of the same name, starring Harrison Ford in the lead-role of Jack Ryan. Taking on various issues of the day, mostly involving terrorism and crime, Clancy’s stories would become timeless, as well as being highly entertaining page turners. Receiving numerous awards and honorary doctorates during his lifetime, including being one of the top three bestselling authors on first printing, his books continue to attract readers from across the world to this day. Leaving behind plenty of highlights his legacy lives on, with a number of noteworthy additions to his literary career.

Here are my own personal top five favorites from the career of Tom Clancy ranked in order: 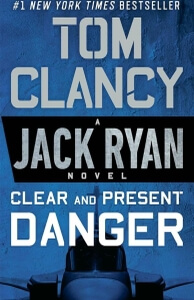 Unhappy with their constant run-ins with America, Colombian drug lords set about assassinating the head of the FBI. This then sends a clear message to the United States, but it’s not one that they’re going to take sitting down, as Jack Ryan is called in to neutralize the threat. Dealing with the attack, Ryan must analyze exactly what they’re dealing with and what boundaries have been crossed with this very clear and present danger.

This was initially the fourth title to be released in the Jack Ryan series, coming out in 1989, although it’s the fifth title chronologically. Made into a Hollywood blockbuster starring Harrison Ford in 1994, it’s definitely Clancy at his most raw, providing some of his most exhilarating early work. It’s also extremely prescient in its depiction of the NSA, which, whatever side of the fence you come down on, is impossible to deny how foretelling the book was dealing with various issues of national security. 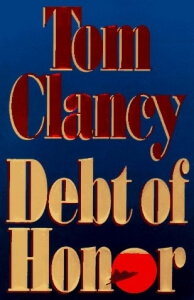 Looking to elevate Japan’s global standing, Razio Yamata is an industrialist who’s part of an elite group in the Pacific Rim economic sector, and he aims to do it by crippling the US military. Seeking revenge for the death of his parents, Yamata is looking for the ideal opportunity, and that’s when a US congressman pushes through new trade laws after the car of a Tennessee family explodes. Stepping onto the scene is the president’s new National Security Advisor Jack Ryan, as he notices somebody is preparing something big, and it’s up to him to get to the bottom of it.

Set on an international stage, the geopolitics at play here is thrilling to watch unfold across the page, as it’s an exciting and tense story. The action is constantly shifting and moving, as Clancy continues to raise the bar on what came before, always taking it up a new level each time. This is the seventh Jack Ryan novel, so there’s plenty of expectations already, but it continues to surprise the reader, remaining entertaining and relevant throughout. 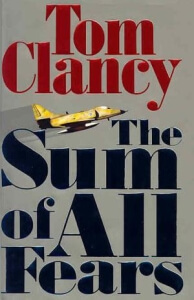 Amidst the turmoil of an ever changing geopolitical landscape, Jack Ryan is looking to lay the foundations for a Middle Eastern peace plan that could change everything. Terrorists are attempting to disrupt the plans though, as the world is thrown into a nuclear crisis, the like of which has never been seen before. Now, with the help of FBI agent Dan Murray, Jack Ryan must work against the clock in order to ensure not only the peace deals go through, but that the entire world is kept safe.

Made into a well known film in 2002 starring Ben Affleck in the lead-role as Jack Ryan, alongside Morgan Freeman, this sixth title in the Ryan series is one of the better known novels. Filled with edge-of-the-seat action and suspense, it’s a story that really pulls out all the stops, continuing to surprise the reader at every turn. Using real-world settings, the story, as is always the case for Clancy, remains authentic and believable, being well researched every step of the way. 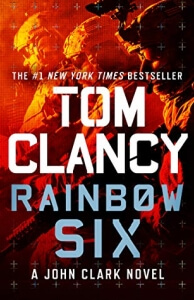 The ex-Navy SEAL John Clark is assigned a new international task force, as they’re dedicated to combating terrorism on a global platform. That’s when a number of missions comes his way, each one more difficult than the last, and it starts to appear that there may be some connection between them all. Something big is coming, and it’s up to Clark and his team to find out what it is, in this novel that would come to pioneer the subgenre known as the techno-thriller.

Whilst this is the second book in the John Clark series, it’s also the tenth title in the overall Jack Ryan universe. Bringing such a wealth of lore to the table, the expectations were already high for me when first reading this book, but it didn’t disappoint delivering above and beyond. Now many will know it for the successful line of video-games it’s spawned in its name, but this is where it all began, in this raw and thrilling novel. 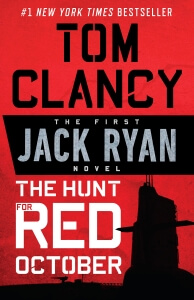 There’s a Russian sub said to somewhere deep under the Atlantic ocean, with its commander having made an extremely fateful decision. Heading west, the sub known only as the Red October plans to defect, but it seems that the Soviets aren’t going to give it up without a fight. From here a chase is then underway, and Jack Ryan must work to help bring the submarine to the safety of American shores.

Regarded by many as one of his best, this would be the novel that would make Tom Clancy’s name for him, with it being his big debut. Not only setting up his career, but the character of Jack Ryan too, it was also highly regarded for its authenticity and devotion to accuracy. Many would say it was so accurate that some speculated as to whether or not the author had been debriefed by the White House itself, and it’s easy to see how such rumors came about when reading the novel.

Best Authors To Read If You Like Tom Clancy:

Robert Ludlum: During his lifetime Robert Ludlum was, much like Tom Clancy, an institution in the world of thrillers. An American author too, he would perhaps be best known for his Jason Bourne novels, which would be made into a series of films starring Matt Damon in the lead-role. Creating a total of twenty-seven thriller novels, he’d also write under the names Michael Shepherd and Jonathan Ryder, with between 300 and 500 million books of his estimated to be in print.

Jamie Freveletti: American thriller novelist Jamie Freveletti is highly regarded for her exciting and action packed books. Writing alongside Robert Ludlum too, she’s a respected figure within the industry, as well as being a household name for many. Producing much of the Covert-One series initially created by Ludlum, she’s gone on to write the Emma Caldridge novels as well.

Lee Child: The British author James Dover Grant has made a name for himself writing under the pseudonym of Lee Child. Focusing solely on his Jack Reacher series, he follows the former United States Military agent, as he travels across America undertaking various assignments. The books have been adapted for film, with Tom Cruise previously playing the lead-role, and an Amazon Prime show is currently in the pipeline.

Brad Thor: Writing breathtaking action packed novels, the American writer Brad Thor is known for his adrenaline fueled stories. Taking a page out of Clancy’s book, his inspirations are clear, with his fun exciting novels filled with suspense and drama. Many of his books take place on an international stage too, such as his Scot Harvath series, including his own interest in geopolitics which is clearly evident throughout.

Gayle Lynds: Working in the world of spy fiction and espionage, American author Gayle Lynds has a distinctive and unique voice. Published across the world, she’s a founder of the International Thriller Writers, with her work being read by many. Also working with Ludlum in the past, she’s a highly regarded key figure for many too, always with something important to say in her work.

The Author Stories Podcast – Mike Maden Interview: Speaking to Mike Maden, this interview examines what it takes to write a Tom Clancy novel. Looking at the universe created by the late author, it’s an interesting insight into what goes into these stories.

Writer’s Bone – Marc Cameron: This time the author Marc Cameron looks at how he came to write the Tom Clancy novel ‘Code of Honor’. He also gets into what drives the character of Jack Ryan, and how he continues the Clancy legacy effectively.

Ultra Super Mega – Locked On: A Tom Clancy Podcast: For anyone interested in the video-games set in the Tom Clancy universe, this is the ideal series to keep up with. Covering everything in and around the franchise, it’s a great window into the overall brand of the author.