When it comes to good solid American mystery novels, you really can’t go wrong with the work of Faye Kellerman. Knowing how to perfectly craft suspense, she has a gift for the form, in what are always engaging and entertaining reads. Often writing alongside her husband Jonathan Kellerman, the both of them are huge within the genre, as she definitely has a lot to say with her novels. It’s the ‘Peter Decker/Rina Lazarus’ mysteries she’s largely known for, as these have drawn in readers from all over the world.

In 1986 Faye Kellerman would make her debut with the novel The Ritual Bath, which would also become the first ‘Decker and Lazarus’ title. The ‘Peter Decker/Rina Lazarus’ series would follow LAPD lieutenant Peter Decker, along with his wife Rina Lazarus, as they’d both solve crimes together. Featuring a number of mysteries, the series would become a firm favorite with fans, which was cemented with the second novel Sacred and Profane in 1987. There was stand-alone novels too, the first of which was The Quality of Mercy released in 1989. Writing short-stories as well, she’s well versed in crime fiction, with a strong voice that’s reached fans from all over.

She’s also written a Young Adult novel with her youngest daughter titled Prism, which came out in 2009. This all led to her not only being a bestselling novelist, but also receiving good reviews from the critics too. Largely focusing on mystery stories, she enjoys crafting intricate plots that keep readers coming back for more. This could be seen from the outset of her career when winning the Macavity Award for Best First Mystery Novel, and she’s continued to produce many noteworthy highlights since.

My own top five novels from the career of Faye Kellerman are ranked as follows: 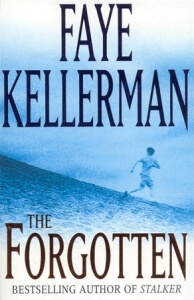 See at Amazon#5: The Forgotten (2001)
A small store-front synagogue has been completely vandalized with anti-Semitic images and graffiti, leaving Rina Lazarus shocked. Working with her husband the LAPD Homicide Lieutenant Peter Decker, the two of them are led to the suspected perpetrator Ernesto Golding, a young seventeen year old boy motivated by his grandfather’s history. That’s when the boy is found murdered along with his therapist, and the horrors of the past come to surface once more.

There was a lot going on here, and it was definitely an intriguing book with a lot to say, drawing me in from the outset. The characters were solid, and could be read as a stand-alone book, despite it being the thirteenth part in the ‘Peter Decker/Rina Lazarus’ series of books. Creating a whole world here, Kellerman makes the most of her premise, really bringing it to life off of the page. 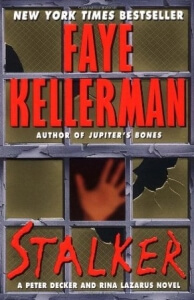 See at Amazon#4: Stalker (2000)
With her father being the senior lieutenant, Cindy Decker is mistrusted by many of her colleagues in the LA police department. As a policewoman, she now must deal with someone attempting to harass her, who, at first it seems like they’re simply a disgruntled fellow worker, but soon it appears to be something more. The issues get bigger, as there’s a kidnapping and car-jacking, with things beginning to spiral out of control, and she must get to the bottom of it all before it’s too late.

This is the twelfth book in the Peter Decker/Rina Lazarus series, and Kellerman has built an entirely new and interesting dynamic here. Taking the daughter of Decker, previously a side character, she’s now brought to the forefront in her own exciting mystery. Solving the crime, it expands not only upon the characters, but on the world as a whole, really fleshing it out to its full potential. 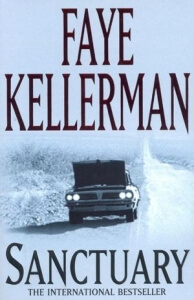 See at Amazon#3: Sanctuary (1994)
Disappearing from their Los Angeles’ manor, a diamond dealer, along with the rest of his family, has gone missing, as all the valuables have been left untouched. Now Peter Decker is left with more questions than answers, which becomes even more of a mystery after another dealer is discovered murdered. Setting off on an investigation that spans the entire world, he must now get to the bottom of the case, despite some of the clues lying dangerously close to home.

Another solid mystery from Kellerman, it’s almost impossible to fault her when it comes to crafting intriguing narratives. The character of Peter Decker is once again a strong one, in what is the seventh title in his series, with the world already being firmly established. It’s also very well realized in terms of scope, as it broadens its scale to what came before, whilst remaining true to the characters and core concept. 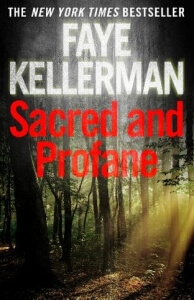 See at Amazon#2: Sacred and Profane (1987)
Spending time with the two sons of Rina Lazarus, Peter Decker heads off on a camping trip, only to be met with more work out in the wild. Discovering the skeletons of two teenage girls, the sons are shocked by what they find in the woods, and this also effects Decker deeply. Investing himself in his work, he will stop at nothing to find out how they got there, and who’s responsible for them being charred so badly.

Not only is this yet another great Kellerman mystery, it also provides some excellent character building too. Heading on to Hollywood Boulevard, it takes some seedy detours into an otherwise unseen shady underworld too. This is handled expertly, really bringing to life the world of the novel, letting it breathe there on the page in the second title in the Peter Decker/Rina Lazarus series. 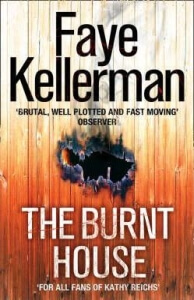 See at Amazon#1: The Burnt House (2007)
When a small commuter plane crashes into an apartment complex in Granada Hills, California, killing forty passengers at 8.15 am, it appears that Peter Decker has his work cut out for him. Quelling fears of another 9/11, he has to work around the clock putting the pieces together, finding out the truth behind the so called ‘accident’. It also appears that there were four extra passengers on-board who weren’t supposed to be there, along with the flight attendant Roseanne Dresden who was said to never actually be there, despite being registered in the flight logs.

There’s a lot of questions posed in this exciting mystery, and I wanted to learn the truth almost instantly after picking it up. It’s the sixteenth book in the Peter Decker series, and Kellerman is clearly within her element here, knowing exactly where to take the story.

Hitting all the right beats every step of the way, it does everything a good mystery novel should do, in terms of both its character and its story, and it definitely rung true to me.

Best Authors To Read If You Like Faye Kellerman:

Jonathan Kellerman: So this one may seem a little obvious to go with straight off the bat, but they share many of the same sensibilities, which stands to reason with them being married. Knowing his subject matter well, he comes from a background in psychology, working with children, something he’d later come to write about. His main series, the Alex Delaware novels, would feature a forensic psychologist, which went on to be adapted for the big-screen on numerous occasion.

Tess Gerritsen: The American author Tess Gerritsen writes entertaining thrillers paying close attention to detail and authenticity throughout. Originally a medical physician herself, many of her stories reflect this, capturing a sense of realism that draws you in. Her characters are also well established too, with strong solid mysteries that constantly kept me guessing at every turn.

Ruth Rendell: British author Ruth Rendell was a master of mysteries during her lifetime, with her psychological thrillers constantly twisting and turning. Her Inspector Wexford stories are still some of the most influential mysteries in the field to date, having made a considerable impact on the genre during her lifetime. Adapted for the television too with the self titled ‘Ruth Rendell Mysteries’, her work lives on, along with inspiring major films as well.

Jesse Kellerman: As Faye and Jonathan Kellerman’s son, he also writes thriller novels full-time, following in the footsteps of his parents. A playwright as well as a novelist, he’s a gifted writer who consistently produces suspense fuelled work of a high quality. Writing alongside his father, the imprints of his parents can be seen in his work, whilst also finding his own unique voice and style.

Iris Johansen: An American writer of crime fiction, Iris Johansen is also known for bringing both romance and suspense into her work. With bestselling novels reaching a worldwide audience, she’s also had films produced from her work in the past as well. Well researched and entertainingly written, she’s a must for both fans and newcomers to the genre alike, keeping her readers hooked all the way.

Jay’s 4 Questions – Faye Kellerman: Speaking to the host Jay Sanderson, Kellerman talks about her life and her faith. Looking into her own relationship with Judaism, it provides another angle in her life.

Public Display of Imagination – Faye Kellerman: This takes a look at Kellerman’s work and how it arrives to the page. Focusing on her book ‘Killing Season’, she examines her characters Peter Decker and Rina Lazarus and what they mean to her.
Bloodlines and Bestsellers – The Kellerman Family of Crime Writers: This interview with the whole of the Kellerman family is an illuminating look into how they write. It shows their own creative processes, and their relationships with one another’s writing.