When it comes to contemporary American thriller novels there is no-one quite like the author CJ Box; a bestselling writer who has been at it for quite some time now. Largely known for creating the Joe Pickett series, he’s well regarded for his collection of stories featuring the eponymous game warden, solving various mysteries out in the rural expanse of Wyoming. This has proven to be a hugely successful formula for many, with his rugged approach to the mystery thriller genre, along with his two other series; Cody Hoyt and Cassie Dewell. Definitely a master of the craft, Box excels in his handling of suspense, building the tension on the page and sustaining it throughout.

His debut novel was written back 2001, and this would be the first title in the Joe Pickett series Open Season, introducing not only the character, but Box as a writer. Quickly following this up with the sequel just one year later, he’d then release Savage Run in 2002, along with the third title, Winterkill, in 2003. Subsequently he’s released twenty titles in the series and counting, with each novel being published on an almost annual basis. In 2011 he’d publish Back of Beyond, which would start the Cody Hoyt series, and The Highway in 2013 starting the Cassie Dewell stories. His Cody Hoyt books would focus on a brilliant, but troubled detective, whilst Cassie Doyle is a spin-off series featuring his former partner, and together they would be called ‘The Highway Quartet’. Writing two stand-alone novels in 2008, Blue Heaven and Three Weeks To Say Goodbye, he’d also contribute to the 2013 collection Inherit the Dead.

Well paced and intelligent throughout, Box has been translated into twenty-seven different languages, with his works becoming worldwide bestsellers. Winning not only the Anthony and Macavity awards, but the Gumshoe and Barry prizes too for his first novel, he’d also receive an Edgar for Blue Heaven in 2008. These would be just some of the plaudits he’d gain for his work, marking him as a writer at the forefront of his genre and field. Over the course of his career he’s seen a number of career highlights, many of which have helped him to become the household name that he is today.

These are just some of my own personal highlights from the career of CJ Box so far, ranked in order of the top five: 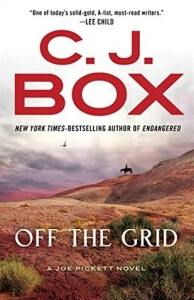 Living completely off the map, Nate Romanowski is nursing himself back to health following the fallout of his last crimes. That’s when a small, but organized squad of elite snipers surround his hideout, before expressing the intention of cutting him a deal; vanishing his criminal record if he agrees to help neutralize a terrorist cell in Wyoming’s Red Desert. Stepping up, Joe Picket smells something fishy about the whole thing, as he attempts to help his friend Nate get back on his feet.

The sixteenth title in the Joe Pickett series, this would see the franchise already well underway, in what is another strong addition to the collection. Originally released in 2016, it works because of how well the central character has been established by this point. Getting straight down to the action itself, it manages to provide yet another solid mystery thriller, and one that still manages to pull a few surprises out of its sleeve. 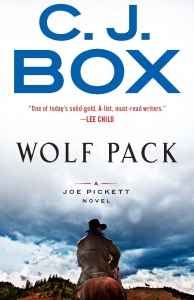 Joe Pickett has his job back as the Wyoming game warden, but it seems that there’s a drone out there killing the wildlife. Not only that, but it also appears that the owner of the drone, a wealthy man in witness protection, has a grandson that is dating Pickett’s daughter Lucy. Then four assassins turn up with the intention of killing the wealthy man, and Pickett must team up with his fellow game warden Katelyn to take them down, as he faces off against the cartel.

This definitely has everything, with a number of strands being effectively juggled at once, as Box makes the most of the premise. Knowing exactly when to turn up the heat and tension, it’s everything that’s good about the ‘Joe Pickett’ series, this one being the ninth title. It moved along at a brisk pace, and I wasn’t even aware of how much time had passed until I put the book down and looked at the clock, making it a definite must from the author. 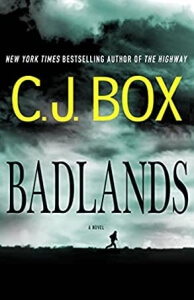 In Grimstad, North Dakota, oil has just been struck, and now the men with money are moving in to take over, bringing a whole host of crime with them. Seeing an accident take place in Grimstad, twelve-year-old paperboy Kyle Westergaard finds himself coming into a lot of money and drugs during one of his rounds. Kyle has big dreams of wanting to escape the town, and it’s now up to detective Cassie Dewell to solve the case, as she finds herself thrown into the middle of dangerous drug war she might have difficulty emerging from.

As the third title in the Highway Quartet, this is an great example not just of the series, but of CJ Box’s writing as a whole. Really bringing a sense of urgency to the action, he definitely knows how to push it to the limit yet again in this thrilling and exciting installment. I found myself devouring this book in a very short amount of time, as it kept me reading and was extremely difficult to put down. 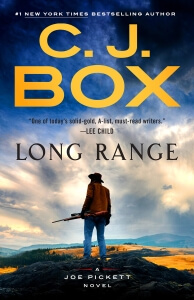 There’s been a murder on the home turf of warden Joe Pickett, and it’s the wife of a local judge, as she’s been shot at a seemingly impossible range. With a whole host of mysterious circumstances surrounding the case, he must now deal with it, finding out who else could be targeted by the killer. Now there’s also been a grizzly attack in the area, as the friend of Joe, Nate Romanowski, is attempting to work this out, as they both attempt to unpack the mysteries surrounding both cases.

What I personally really enjoyed about this book was the mystery element, as, whilst Box is great at suspense, he also knows how to weave a fine mystery. Always remaining one step ahead, I never saw what was coming next, as he knew exactly where to take the narrative and when. The characters are well established by this point too, with this being the twentieth book in the Joe Pickett series, and I really felt I knew them here. 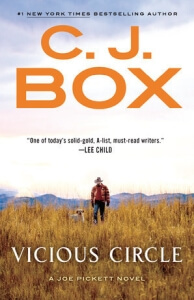 Witnessing three figures closing in on an individual in the snow, Joe Pickett sees a crime from his plane above. This then means that the three of them now have him in their radar, and it’s the Cates family, a group that’s always despised Pickett and his own family. Having lashed out at them previously after threatening the life of his daughter, he’s now waiting alongside his friend Nate, as the big showdown is set underway.

This is an extremely tense book, with the climax building up constantly throughout, as Box leaves nothing out here. The suspense developing towards the final conclusion is extremely effective, as it definitely pushes the concept above and beyond. It’s a really enjoyable title with a lot of excitement along the way, making it one of the best that I feel Box has to offer.

Best Authors To Read If You Like CJ Box:

Craig Johnson: Much like Box, Johnson writes mystery novels, and also much like Box he sets many of them in his home county of Wyoming. Largely focusing on the character of Sheriff Walt Longmire, a lot of his stories take place in the great outdoors, as the rural setting takes precedence. These aspects will appeal heavily to fans of Box, making his intricately woven stories a must for any followers of the genre.

Margaret Coel: The county of Wyoming again features heavily, as one of Margaret Coel’s most popular franchises to date, the ‘Wind River Mysteries’, takes place in and around this area. Looking at real-life crimes, she combines fact and fiction, creating a highly authentic and compelling set of reads that really bring the reader in. With twenty books in this series, Coel is a gifted author and really will compliment the writing of Box and other writers in the mystery genre.

Michael Connelly: Many fans of the thriller genre will likely already be well aware of Connelly’s work, as for many he’s an author who needs no introduction. Writing the ‘Harry Bosch‘ series of noir novels, they’re set in Los Angeles and feature the detective of the same name, as he goes about solving various cases. Previously working as a crime reporter himself, Connelly is more than adept at establishing a sense of realism in his stories, whilst also keeping them fun and entertaining.

John Sandford: The writer John Roswell Camp is mostly known by his pen-name of John Sanford to thriller fans, with his many detective mystery novels. A Pulitzer Prize winner, he’s a gifted storyteller, understanding his craft inside out, allowing the characters to essentially speak for themselves. The character of detective Lucas Davenport is well drawn, as Sandford keeps readers guessing with every page turn.

Nevada Barr: Setting a lot of her mystery novels in national parks, the wildlife aspect is heavy here once more, as this time many of her stories largely concern a park ranger. The main series from Nevada Barr is her Anna Pigeon novels, and they feature the eponymous character as a national park ranger solving various different mysteries and crimes. It’s a compelling collection of novels, and they really work at immersing the reader, with their rich and vibrant world.

The Writing Show – A Different Kind of Detective: Talking about his character Joe Pickett, CJ Box breaks down what goes into his writing with the host Paula B. Looking at the detective genre overall, he provides a level of insight on writing crime and mystery.

The Author Stories Podcast – CJ Box Returns for Joe Pickett’s 20th Instalment: This is an interesting discussion with the host Hank Garner, as CJ Box talks about his Joe Pickett character again. Looking at his own life too, it’s a unique look into the background of the author.

Book Talk – CJ Box Talks Long Range: Speaking on his book ‘Long Range’ this time, this sees CJ Box focusing on how he came to write the novel. It’s great for fans of the author, examining his writing process over the course of a single book.