Michael Crichton is one of the most famous authors in history as he wrote numerous books that became not only Hollywood films, but smash hit box office successes. Chief among these is Jurassic Park which is considered by many to be one of Crichton’s best ever works. The book was well received by critics and was made into a huge movie directed by Steven Spielberg that grossed over $1 Billion dollars at the box office and spawned multiple sequels, and even lead Crichton himself to write a sequel to the original book which is something he never did before or after.

Crichton was born in Chicago in 1942 and was raised on Long Island. He was interested in writing from a young age and was even published at age 14 in the New York Times with a story about a trip he took to Sunset Crater.

Crichton published his first novel while still in medical school. The novel was called Odds On and was published under the name of John Lange. He wrote under the pen name because he didn’t want patients to think that he would use them in his work. After publishing four books under this pen name, Crichton realized that he didn’t love medicine and that he found writing to be his passion. He wrote a few more novels under the name of John Lange before publishing The Andromeda Strain in 1969 which is the book that really established him as a major author and would eventually become his first book made into a film.

In addition to his work as an author, Crichton also worked as a screenwriter in his lifetime as well as a film director and film producer. From his filmography, the most popular work might be Westworld which was a film made in 1973 that has since become a wildly popular HBO series. His greatest success in film might be Coma which he directed and wrote the screenplay for. The movie was adapted from the 1977 novel of the same name by Robin Cook. Of course, all of that pales in comparison to ER. Crichton was the creator and executive producer of this television show that became one of the biggest television shows of all-time. In 1994, Crichton at one point had the #1 film at the box office, the #1 TV show, and the #1 book in Disclosure.

Crichton was diagnosed with lymphoma in early 2008 and was going through chemotherapy, but he ended up passing away later that year at the age of 66. He has had numerous novels published posthumously.

While it didn’t make the list – honorable mention to Airframe. As crazy as it sounds, that was the book that introduced me to Crichton. I mean the way I saw it was if he can make an accident investigation into “extreme airplane turbulence” an excellent book, then I knew I had a great author in my hands. 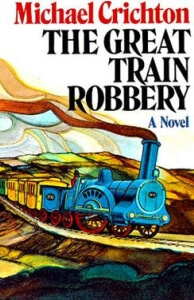 This book takes place in Victorian London in 1855 at a time when extreme wealth and extreme poverty were living side by side. Edward Pierce is rich and handsome, and able to navigate both of these worlds with relative ease. Pierce begins to charm his way around town because he has plans for a masterpiece of a crime: The Great Train Robbery.

He may be the perfect man to commit this crime because nobody in this era would believe that a gentleman like him could commit a crime life this. The train robbery is set for the might steamy locomotive that is the pride of England at the time. The story is based on fact, but told as legend with all of the great storytelling pieces that we have come to expect from Crichton.

The story is very well researched by Crichton as even the language reflects the Victorian times. Filled with suspense, this book builds to a strong ending that shows why Crichton is one of the masters. 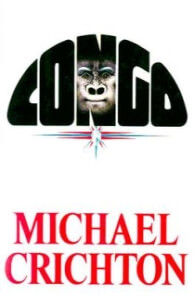 In a lot of ways, this is the lost book of Crichton’s collection. A lot of people have issues with this story, but it’s all about the film that was made and honestly has nothing to do with this book which is much more intelligent and interesting throughout.

The book takes place deep in the African rain forest near the ruins of the Lost City of Zinj where a field expedition has seen everyone in their party killed. The Earth Resources Technology Services, Inc. team back in Houston watches a video transmission of the deaths and sees a haunting blur moving among the bodies.

Meanwhile, in San Francisco there is an extremely smart gorilla named Amy that knows 620 signs that could hold the secret to what happened out there. Amy is sent along as another expedition is sent to the Congo to find out what happen in the forbidden world of the rain forest. 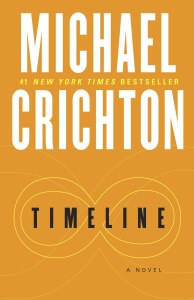 Michael Crichton’s time travel thriller is similar to Congo in that there was a movie made of it, but the book is way better.

The book sees a group of young archaeologists who make a shocking discovery at a medieval site that is going to change their lives forever. Meanwhile, in Arizona, a man walks into the desert speaking jibberish and twenty-four hours later, he dies. The archaeologists are swept up by a multinational corporation with a new technology that offer the group an opportunity of a lifetime. Not only can they study the past, they can go into it. The group will be whisked off to medieval France on a daring rescue mission that will find them fighting for their own lives.

The book starts like a time travel story, but as soon as they get into the past it quickly becomes a swashbuckling old-fashioned adventure as the group attempts to survive in the medieval times. 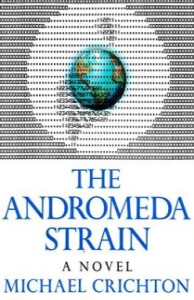 Michael Crichton has always been ahead of his time, but he really showed it back in 1969 with this book which became his breakout novel. Michael’s knack for research is on full display here with tons of scientific jargon and procedures. The book redefined the science fiction genre and put him firmly on the map as an important author.

The government has sent out a military space probe to try and collect organisms from the atmosphere to possibly weaponize them. Instead, their worst nightmare takes place when the probe is knocked out of orbit and crashes in Arizona. The probe unleashes a deadly phenomenon that leaves everyone in town, but two dead.

The United States mobilizes their Project Wildfire team to respond and sends four of the nation’s most elite biophysicists to a clandestine underground laboratory to try and get ahead of the Andromeda Strain before it spreads into a catastrophe. 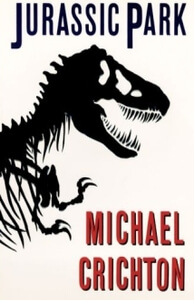 The book starts in 1989 when there are a number of strange animal attacks occurring near Costa Rica. A team of experts is sent to an island called Isla Nublar to identify the dinosaurs, but they are quickly taken away by billionaire John Hammond who owns a genetic company has brought dinosaurs back to life. They soon find that they don’t have the level of control of nature that they think they do and all hell breaks loose.

The characters are a bit different than the movie as Hammond is far greedier and evil. While Ellie and Lex are more secondary characters than they are in the movie. Still, it remains a must read for fans of the movie and science fiction in general. An all-time classic novel.

Best Authors To Read If You Like Michael Crichton:

Neal Stephenson: Neal is an author who really digs in to the science behind his books in a way that is very similar to Michael Crichton. Much of his early work focused on cyberpunk, but he became much more of a techno-thriller writer later in his career with more elaborate and inventive plots.

One of his must-read books is Reamde. The book is set in the present day and focuses on a wealthy entrepreneur who gets caught in a crazy plot all because of the MMORPG that he created.

Crichton fans may enjoy his 1999 book, Subterranean. The book sees the discovery of a a subterranean deep under the ice at the bottom of the earth. One team has already been sent to explore, but they didn’t return. Now archaeologist Ashley Carter leads a team to try and discovery the mysteries below the ice.

Dan Brown: This is another name that you will surely recognize, but Brown has a lot in common with Crichton as his books are engaged with historical facts and well researched.

Fans of Crichton may enjoy Dan Brown’s novel, Angels and Demons which is the first book with the character of Robert Langdon. The title character is based on a real life typographer and features the Harvard symbologist summed to a Swiss facility to analyze a mysterious symbol that was seared into the chest of a dead man. The symbol proves the existence of the secret society known as the Illuminati.

Blake Crouch: Blake is a bestselling novelist who is best known for writing the Wayward Pines series that was eventually adapted into a television show on FOX.

Fans of Crichton will enjoy Crouch’s twisty science fiction thriller, Dark Matter. This book tells the story of a brilliant quantum physicist who had a brilliant research career ahead of him, but chose to be with his pregnant girlfriend instead of continuing his work. The book asks the question of “what if he didn’t?”, but does it in ways that you wouldn’t expect that is imaginative and addictive.

Andy Weir: Andy spent two decades working as a software engineer before publishing his first novel and becoming a full-time writer. That book was called The Martian that should be on the bookshelf of any Crichton fan.

Weir had had a lifelong space and studied it greatly which really shows in The Martian. The book sees an astronaut on Mars getting left behind by his crew as they believe him to be dead. The man has to learn to survive on his own in creative ways that are all scientifically correct.

Crichton Cast: This is a podcast dedicated 100% to Michael Crichton, his books, the movies he made, and the movies made about his works. A must listen for Crichton fans.

The Drunk Guys Book Club Podcast – The Andromeda Strain: Each week, the guys tackle a famous book and try to pair it with a craft beer. This episode digs in to Crichton’s breakout novel and pairs it with four out of this world beers.