As a fictionalized detective living in Sicily, Inspector Salvo Montalbano is one of Italy’s most engaging and long-lasting characters. Becoming an institution in his own right, Andrea Camilleri created a total of twenty-seven novels, along with nine collections of short-stories. There’s also another novel set for release posthumously, with the release date being as of yet undetermined, marking the character as on of the most iconic that Italy has to offer. Extolling virtues of being decent, loyal and honest, he’s an ever engaging protagonist, and one that will last for a long-time to come.

The first Inspector Montalbano novel would come out in 1994 in Italy initially titled ‘La forma dell’acqua’ in its original language. It would later be released as The Shape of Water after being translated into English in 2002 for an international audience. The character of Inspector Salvo Montalbano would be Sicilian, which can be seen reflected in the original language of the novels, with them being written in a combination of Italian, Sicilianized Italian and strict Sicilian. This would make the mysteries themselves very much a product of their environment, whilst reaching out internationally to an audience of readers worldwide. Finding his way through a murky world of grays with no moral absolutes, Montalbano does his best to seek justice in the fictional town of ‘Vigàta’, itself set in the fictional district of ‘Montelusa’.

For a long time now, the series has also been a long-running television show, starring Luca Zingaretti in the lead-role. Starting out in 1999, it has lasted for thirteen seasons so far, and has covered most of the stories told by Andrea Camilleri himself. Extremely prolific during his lifetime, Camilleri would gain huge critical and commercial success for the character, along with plenty of highlights throughout the series itself.

In my own personal opinion, these are the top five novels in the Inspector Montalbano series: 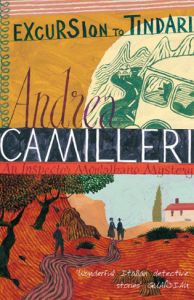 Dealing with a new and challenging case, Inspector Montalbano must get to the bottom of two seemingly unrelated murders. After a young Don Juan is killed, along with an elderly couple now missing, it seems that both events happened within the vicinity of Tindari. Dealing with them both, he starts to immerse himself into an evolving world of crime, one that’s shifting into something new and even more deadly.

This is an extremely interesting novel, as it questions crime and its place within modern society, along with looking at society as a whole. It examines this through the lens of Montalbano, who is himself getting older, now in his fifties, as he attempts to make sense of it all. Working as a well observed character study too, it really delves into who he is as a person, getting to the heart of what it is that drives him. 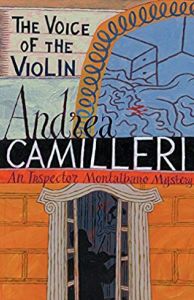 On the trail of a murderer, Inspector Salvo Montalbano is searching for the killer of a young woman, and there’s many suspects. From her ageing husband, to a shy admirer from afar, to an antiques dealer who was also her lover; all of them appear to be culpable for the murder. It is a reclusive mysterious violinist that seems to hold the truth, though, as they hold the key to her true fate.

Posing a number of moral questions to the detective, this title seems to get to the heart of who he is as a person. Testing him, this case is especially challenging, as he tries to keep on the right side of justice himself, whilst searching for the killer. Wanting to bring them in at any cost given the horrific nature of the crime, he has to ask himself what lines he’ll cross to get the job done. 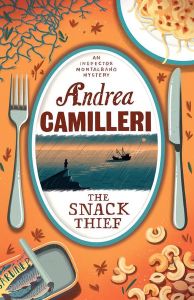 This time exposing government corruption, Inspector Montalbano heads into the viper’s den, taking on a conspiracy that goes international. Stabbed to death, an elderly man is discovered within an elevator, whilst meanwhile a crewman aboard a fishing trawler is gunned down by a Tunisian patrol boat. That’s when Montalbano meets Karima, a house-cleaner with a son who steals other people’s lunches to get by and, after she leaves, the son’s life is on the line, as the inspector must put all the pieces together.

Examining the moral ambiguities of justice and government, Camilleri handles the story with both nuance and tact. A highly capable author, he manages to produce an intricately woven mystery with plenty of twists and turns, whilst saying exactly what it is that he wants to say. Being the third novel in the series too, it manages to carry the characters forwards, developing their arcs and the world around them. 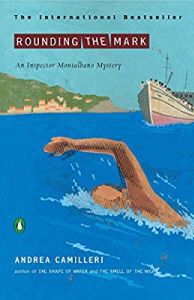 Inspector Montalbano is taken deep into the world of illicit drug trafficking, as he investigates two seemingly unrelated murders. Testing him to the limits once more, he looks at a horrific trade that deals in people, as he must contend with his own morals in an attempt to see justice prevail. Pushed psychologically and physically, he has to see the case through, despite having lost faith in the institutions that were supposedly in place to protect the vulnerable.

Whilst its subject matter is extremely dark, this is a strong entry into the series nonetheless, with it being the seventh title in the series. Taking a shot at Italian politics too, Camilleri makes sure to get his message across in a clear concise manner that can’t be misconstrued. The mystery itself is also very well plotted, moving along at a brisk pace that never leaves the reader behind at any point. 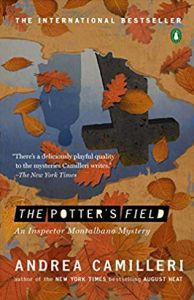 An unidentified corpse has been discovered nearby Vigàta, the location being well known for the potter’s clay in its soil. Not only that, but a husband has just been reported missing by his wife, and he’s related to a local mobster. This leads Montalbano into investigating a case with biblical underpinnings, as it’s his knowledge of this that will lead him to the solution.

This book is cunning in that it lulls the reader into a false sense of security, constantly playing with their expectations. The twists and turns are completely unexpected and always come as a surprise, even for veteran readers of the genre. A consummate professional, Camilleri definitely knows what he’s doing, and this book, the thirteenth title in the series, is no exception.

Best Books & Series To Read If You Like Inspector Montalbano:

Rocco Schiavone: Drawing heavily from the Inspector Montalbano series, fellow Italian writer and actor Antonio Manzini is perhaps best known for his Rocco Shiavone stories. Now a television series too, with Marco Giallini in the lead-role, it’s a great collection of novels set in the small Alpine town of Aosta. Sent there after continually disobeying his superiors, Rocco is a shrewd quick-witted and highly intelligent, albeit rebellious, detective who has a passion for solving crimes.

Philip Marlowe: The creation of American writer Raymond Chandler, this character has become synonymous with a certain brand of detective noir fiction. Camilleri has often been cited as Italy’s answer to Chandler, with Montalbano drawing up a lot of similarities, and this is something that definitely shines through reading it back again. Ideal for fans of the genre, this is definitely a must to catch-up on if you haven’t already, as the stories still hold up to this day, with their richly evocative atmosphere.

Captain Natalia Monte: Set in Naples, Italy, these novels follow Captain Natalia Monte of the Carabineri police force, as she goes about her duty. Created by the author Jan Merete Weiss, they’re well observed mysteries focusing on both character and drama in an entertaining way. With a dark undertone to the work, it’s a highly immersive read that drops the reader directly in the middle of the action, making them feel as if they’re really there.

Hercule Poirot: Highly iconic, this much loved creation of British writer Agatha Christie needs no introduction for many, all thanks to his distinctive appearance and approach. Known for his unique moustache and French Belgium accent, he’s a super smart detective that gets to the bottom of any case fast. Gifted at the art of surprise twists, you’ll never know what’s coming, that is unless you’ve heard of these twists before, given that many have gone down in literary lore as some of the greatest.

Commissario De Luca: The Inspector De Luca Mysteries, also known as the De Luca Trilogy, is a collection of novels written by the Italian author Carlo Lucarelli. Taking place during the fall of the Fascist government in 1943, these period novels are set in the era of the Nazi puppet state from 1943 to 1945, following the installation of the Italian Social Republic. With an Italian television show titled ‘Inspector De Luca’ adapted from it, it looks at his attempts to find basic justice as a cop in an otherwise corrupt state.

Last Word – Andrea Camilleri: Whilst it’s brief playing at the start of the podcast, this obituary quickly encapsulates the life of Andrea as an author, looking at how Montalbano came about. With excerpts from the author himself, it’s an interesting glimpse into his life as a writer.

Front Row – Inspector Montalbano: Again quite brief, this examines the popularity of the character of Montalbano internationally. Found towards the end of the podcast, it examines his success through the perspective of the television adaptation.

Luigi Gaudio – Andrea Camilleri: Broadcast in Italian, this is for those fluent in the language, giving an academic breakdown of his work. Working essentially as a series of lectures from the Italian professor of literature Luigi Gaudio, they’re illuminating for any fans of the author and the series.