A long-running series for children, Goosebumps is a franchise that for many needs no introduction. Providing ghostly scares featuring tales of the paranormal, this is a horror-lite collection of stories and novels, all aimed at a pre-teen audience. Effectively written as camp fire tales for kids, they have a bright and lively sense-of-humor to them, whilst also not shying away from some highly entertaining scares. Regarded as the ‘Stephen King of children’s literature’ by many, he would release the first novel in the series in 1992, it being titled Welcome to Dead House.

Combining thriller and horror with humor in a series of books that were accessible to children, and would come to feature similar staples and tropes throughout. The first book would be about two children, Amanda and Josh, who move in to an old mansion only to find it’s haunted; a set-up that would become fairly standard for the series. Whilst each book would feature a stand-alone story, there would be recurring characters, such as the villain ‘Slappy the Dummy’, a ventriloquists doll who comes to life through magical incantations, enslaving whoever frees him. Stine would also feature himself in many of the novels and Goosebumps related media, as the all overseeing narrator of the series.

Over the course of its run there’d also be a highly popular children’s television series throughout much of the nineties, along with a lot of related merchandise featuring the brand. Becoming one of the most successful children’s franchises of all time, only second to Harry Potter, there would also be video-games, comics, and two film adaptations, the first of which came out in 2015. Seen as the pinnacle of their genre, as they were not only worldwide bestsellers, but they also won numerous awards, such as the ‘Nickleodeon Kids’ Choice Award’ for Deep Trouble in 1995, thus securing their legacy for years to come.

These are the top 5 books that I personally feel to be the best of the Goosebumps series: 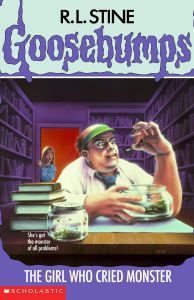 Constantly telling monster stories to anyone that will listen, Lucy finally has to tell the truth, but nobody will believe her. Now a real monster is out there, and it’s none other than the librarian who’s running the summer reading program for children. Not only that, but the monster knows who Lucy is, and is coming for her, leaving Lucy hoping that just one person will listen to her.

Funny and inventive, this story is extremely straight-forward and easy to read, allowing kids to dive right in. Showing a lot of imagination, Stine definitely knows his audience, really bringing the story and the characters to life. Keeping the jokes flying it never takes itself too seriously, whilst being just scary enough for younger readers to enjoy. 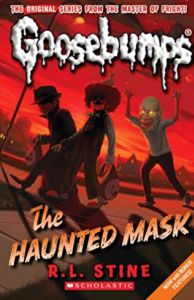 Carly Beth has brought a brand new scary mask especially for Halloween and it’s scaring everyone, just as she likes it. That’s when she finds herself getting a little too attached to the mask, sometimes quite literally, as it almost seems to have a life of its own. Giving her a whole new identity almost, she starts to get strange thoughts whilst wearing it, leading her to wonder if it’s her or the mask that won’t let go.

Fun and scary in equal measure, this combines an interesting and exciting premise with witty and entertaining characters. Keeping the reader guessing throughout, it’s a simple and effective story that gets straight to the point, giving its young readers what they want. Made in to a memorable television episode too, it will always be regarded of as one of the classics from the series by many. 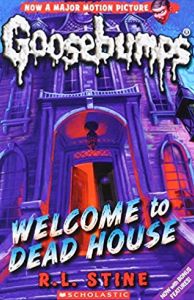 Moving in to the town of Dark Falls, two teenagers Amanda and Josh begin to realize that not everything is as it initially seems. They’re parents don’t believe them though, especially their fears of the house being haunted, and the strange goings-on in the surrounding town. That’s when they make friends with some odd new people, and it appears that they want them to remain friends forever.

Taking the haunted house novel and making it accessible to children, Stine really excelled here with his first novel in the series. Featuring Amanda as its leading character, it’s an extremely creative and fun story, providing the reader with plenty of twists and turns. As the first entry in a fresh new series too, it really set the tone for what was to come, leaving a lasting impression on its audience. 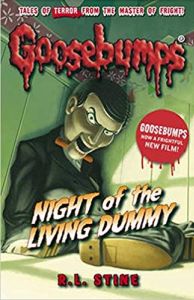 Finding a ventriloquist’s dummy in the dumpster, twins Kris and Lindy make their discovery, as Lindy saves it and decides to call it ‘Slappy’. Kris then becomes jealous of her sister as she wants some attention, leading to her wanting a dummy of her own that she can use. This then makes way for a series of weird and strange happenings, as they start to wonder whether or not it could actually be the dummy causing the trouble.

This saw the introduction of a new villain for the series, and one who would become a recurring character over the course of the series. Creepy and fun it manages to tick all the boxes of a great children’s horror, perfectly exemplifying what the Goosebumps series is about. With elements of the surreal, it takes the series to strange new places, all with good humor in an extremely inventive and entertaining story. 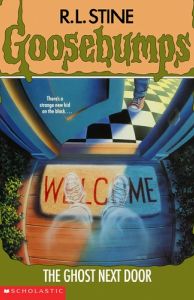 Waking up from a terrifying nightmare, young Hannah Fairchild discovers that the house next door has been sold. Not only that, but it appears that the new family have moved in over night, with a son that seems impervious to accidents that would be fatal to anyone else. Soon it transpires that the family next door may not be in the realms of the living, and that her new neighbors may be of the supernatural variety.

Widely regarded as one of his best in the series, this title really set a benchmark for Stine, in what was Goosebumps number twenty-nine. With a clear story, the premise and set-up for this are strong, as it really has a strong impact in terms of narrative and character. Providing plenty of exciting twists and turns, it’s a perfect example of what the genre can do for young readers.

Best Books & Series To Read If You Like Goosebumps:

Point Horror: For any fans of nineties children’s horror literature, this was another benchmark in the genre, and one that Stine would also write for on many occasions. Often seen as bridging the gap between pre-teens and teenage audiences, it would reflect the real-life fears and concerns of young people, albeit in a horror setting. With similarities drawn to Stephen King in this respect, they were stand-alone stories written by a multitude of different children’s authors, from Stine to Pike.

Spooksville: With an ongoing story, this series would feature a group of young people investigating the strange occurrences in their small and remote USA town. Featuring stories of the supernatural, aliens and even time-travel, they would be aimed at younger children, although there would be some scenes of violence. Written by Christopher Pike it would also go on to become a television series as well, which started in 2013 and would run for a season.

Nightmares!: Co-authored by both the writer Kirsten Miller and actor Jason Segel, this series contains a collection of surreal and strange stories. Seen from the perspective of Charlie Laird, he is a young boy who must face his fears after having nightmares, by entering the Netherworld to face them. Aimed at children and the Young Adult market, they feature recurring characters, as the dreams start happening after moving in to the mansion of his stepmother.

Miss Peregrine’s Home For Peculiar Children: Planned as a collection of novels, this uses elements of the Gothic to tell its story of a now abandoned orphanage that once housed gifted children. Placed there for their rather dangerous talents, the story combines vintage photography with storytelling to creepy effect. It would also see a cinematic adaptation, with Tim Burton directing a film of the first novel in the series in 2016

Scary Stories To Tell In The Dark: Comprised of three collections of short-stories written in the early eighties, these were seen as quite scary, especially for their targeted younger age range. Nonetheless, they have gone on to become hugely successful, combining folklore with a sense of the macabre, allowing children to deal with their fears in a fun and engaging manner. The series would also become a film in 2019, pulling the stories together in to one narrative, and was directed by André Øvredal, bringing the series to a whole new generation.

Goosebumps – Welcome to Deadcast: A retrospective of the entire Goosebumps series, done by fans for fans, this makes sure to leave nothing out. Covering the stories from every angle, they’re definitely an essential listen for any devotees of the much loved stories.

Goosebuds: A fun and irreverent look back at the Goosebumps franchise, taking all the books in on a regular basis. Whilst there’s some more risqué jokes that might not be suitable for younger listeners, it’s a must for anyone who grew up with the series.

Cold Moon – Get Goosebumps!: For fans both old and new, this allows readers to read along and listen back as the podcast goes on. Friendly and fun, it carries the narrative along at a brisk and breezy pace.