That book was actually turned into a movie that was a huge hit at the time as it grossed over $224 million worldwide. The movie starred Tom Cruise as the vampire Lestat and Brad Pitt as his fledgling Louis. A young Kristen Dunst also appeared in the film as the ten-year-old Claudia. The film ended up being nominated for two Academy Awards – for Best Art Direction/Set Decoration and for Best Original Score, but didn’t end up winning either.

Many years later, The Queen of the Damned was adapted into a film although none of the original actors returned. Then, in 2006, the film became the basis for a musical called Lestat. The musical featured songs written by Berie Taupin and the great Elton John.

Anne Rice was actually born as Howard Rice, named after her father. That didn’t last long as she changed her name to Anne in the first grade. She graduated high school in Richardson, Texas and briefly studied at Texas Women’s University and North Texas State College. Her life changed when she met and married Stan Rice, and the two moved to California. It was there that she graduated from San Francisco State College and, eventually, began her work as a writer of erotica and vampire novels.

Rice would become a PhD candidate at the University of California-Berkeley, but she soon realized that she wanted to be a writer and not a literature student. Her and Stan had a child, Michele, in 1966. Sadly, Michele was later diagnosed with acute granulocytic leukemia and passed away. The two would have another child named Christopher in 1978. He would become a writer himself and published his first novel at the age of 22.

While the loss of her daughter was quite sad, it was in her grief that she began working on Interview with the Vampire. She established her own take on vampire lore and who these vampires were, without looking into the history of vampires. The book received many rejections, but Rice believed in the story. She headed to the Squaw Valley Writer’s Conference at Squaw Valley where she met Phyllis Siedel who would become her literary agent. Just a few months later, that book sold for a $12,000 advance (very high at the time) and Rice was on her way. 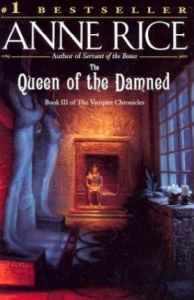 One of Anne Rice’s greatest vampire creations is Lestat, but he definitely meets his match in this story when he comes face-to-face with the mother of all vampires, Akasha – the Queen of the Damned.

The book is told in a unique narrative with three intertwining stories. There is the Vampire Lestat, a rock star worshiped by fans. He’s gaining some fast enemies with his music as other vampires see him revealing their secrets and are set to make him pay. There is also dreams, the dreams of multiple people across the world. They are being haunted by a vision of twins with fiery hair and green eyes suffering a tragedy. The dreams draw the dreamers together, but they don’t know what waits for them.

Finally, there is Akasha awakening from 6,000 year sleep. She has a plan to save mankind from itself by making herself a god. She is the fulfillment and the cause of her wicked plan. 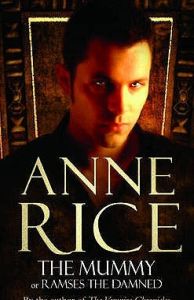 This book is vintage Anne Rice in a lot of ways. The book has a compelling plot and is darkly sexual which takes you back to the feel of her earlier works.

The book focuses on Ramses, the Egyptian legend. He’s a mummy from ancient Egypt, taken to Edwardian London. He has drunk the elixir of life which has turned him into Ramses the Damned. He’s called that because he is doomed to forever wander the earth. He meets Julie Stafford, a beautiful heiress, and the two become close, but his cursed past is drawing them both towards disaster.

Ramses is haunted by memories of his last reawakening by Cleopatra, queen of Egypt. Even with his relationship with Julie, his longing for Cleopatra remains strong. Ramses is a fascinating character and what he will do to cure his longing could have dire consequences. 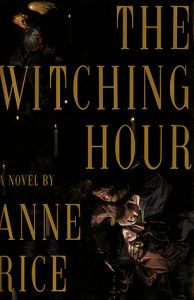 Anne Rice didn’t only write about vampires, she also delved into writing about other parts of the supernatural. She wrote the Lives of the Mayfair Witches series which began with this book. Much like her Vampire Chronicles books, Rice’s witch book takes through the years as this one spans four centuries.

It all begins near the sea when Rowan Mayfair, a neurosurgeon, finds the drowned body of a man and brings him back to life. She is unaware that she has special powers and knows even less of this man. While Michael was dead, he acquired a sensory power that frightens him. The two are drawn to each other though and, together, they work to find out the mystery of her past and his new gift.

The book travels through time as the books traverses through modern day New Orleans, Amsterdam of the past, and a chĂ¢teau in Louis XIV’s France. The book is big and very adult in nature, but in the end is ultimately rewarding. 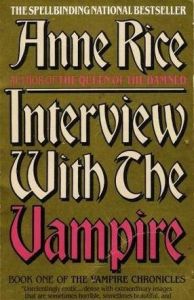 The book that spawned a movie, a series, and modern vampire fiction as we know it. It’s really hard not to put this book at number one as it is so important and did so much to create everything that came after. It could easily be number one on this list and it’s ranking here should not take away from its greatness.

Interview with the Vampire is the story of Louis and his journey through his mortal life to the day it ended and all the days after that. Louis is a vampire, made by Lestat, and he tells his story in this one through all of its ups and downs.

The story takes many heartbreaking turns when Louis meets a lost young girl named Claudia. He only wished to comfort her, but instead he entrapped her. The two would go on to find others like them including the legendary Armand. This book not only tells the story of Louis, but creates a whole world which many more stories could spring from. 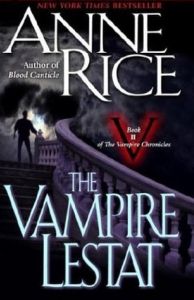 In Interview with the Vampire, Louis is the main character of the book, but it is without a doubt that Lestat is the true star of the novel. He is the most memorable character and the one that everyone is dying to learn more about after reading. Well, this is the book where you finally get that history and book that focuses on the man himself.

In this book, Rice takes Lestat and makes him a bit more likable while still maintaining that edge. While Louis was a bit more self-hating, Lestat is fully self-assured and knows exactly how powerful he is.

In this book, Lestat awakens from a long period of sleep and uses that power to become a rock star in the 1980s. The story takes place between Lestat’s current life and the past where Lestat searched for meaning in his life and the answer to the mystery of vampirism.

Best Authors To Read If You Like Anne Rice:

Elena May: Another vampire series to check out is the Nightfall series. The series takes place in a world where vampires rule the world. They have a machine called the WeatherWizard that controls the weather. That device created Nightfall as a vampire used it to cover the world in clouds and allowed vampires to take over the world.

The series is fast paced and raises a lot of good questions about what it means to be human and morality.

Stephen King: From one horror legend to another. If you are looking for vampire fiction, you can do a lot worse than Stephen King’s Salem’s Lot.

This isn’t the type of sympathetic vampire that were are used to from Anne Rice novels though. These are vampires that are scary not sexy and fully understood as the monsters that they are.

Glen Duncan: Fans of the supernatural would definitely enjoy Glen Duncan’s Last Werewolf series. This series attempts to do for werewolves what Anne Rice once did for vampires.

Jake Marlowe is the last of his kind. He’s a werewolf over 200 years old that still maintains his hunger for the flesh and a voracious libido each time the moon turns full. However, he is slipping into an existential crisis and thinking of ending his own life and that of the werewolves. Some people have other ideas for him and very much want Jake alive.

The basis of the television show, True Blood, this series is incredibly sexy and features vampires, shape-shifters, fairies, werewolves, and much more.

Stephanie Meyer: While some people view Stephanie Meyer’s Twilight series as a sort of “Anne Rice-lite”, is that necessarily a bad thing?

Much like Rice, Meyer has a wholly unique take on vampire ethos and tells the story of Edward and Bella with the type of dark emotion that Rice specializes in while not being quite as sexy.

Big Think: Anne was a guest on the Big Think podcast to discuss a multitude of topics including superstition, science, and why she thinks Freddie Mercury was a vampire.

The Articulate Coven: This is an entire podcast dedicated to the Vampire Chronicles books by Anne Rice. The podcasts covers the books, the movies, and everything else related to the series.

Overdue: The Overdue podcast is about the books you’ve been meaning to read. This episode focuses on Interview with the Vampire and gets into the heart of the book and what it says about the nature of morality and immortality.