Paul Tremblay is an American author best known for writing books in the horror, dark fantasy, and science fiction genres. His books have been bestsellers and well-reviewed in the horror community. He is a prolific short story writer which really got him his start before he burst onto the scene with his first full-length novel, The Little Sleep.

Tremblay has been around for awhile but I actually only started reading him after reading his writing in the anthology The Forward Collection – which obviously makes the list. I thoroughly enjoyed it and devoured up his books immediately following that.

Tremblay was raised in Massachusetts where he spent most of his life. As a high school student he was far more interested in basketball than reading or writing. After high school, he would go on to attend Providence College where he received his bachelor’s degree. He would continue his education at the University of Vermont where he finished his master’s degree in mathematics.

After university, Tremblay didn’t get right into writing as one might expect for an author as prolific as him. He ended up teaching high school outside of Boston. He taught math, naturally, and also coached the junior varsity basketball team.

Tremblay is an author that is obviously inspired by Stephen King, but he had a hard time getting into him. He tried in high school, but found King’s IT so scary that he quit after one chapter. He stayed away from it until college when his future wife gave him a copy of The Stand. This was the moment that he fell in love with writing and devoured almost all of King’s writing. He read other authors like Peter Straub and really became enamored with fiction.

This is when he decided to start experimenting with writing his own stories. He mainly focused on short stories early and was published in numerous publications including Mindkites and Fables.

He eventually moved on to writing novels and his true breakout was A Head Full of Ghosts in 2015. It was this book that drew the attention of Stephen King as the author tweeted that the book “scared the hell” out of him. This was just the beginning as he would go on to win the Bram Stoker Award for Best Novel that year.

As they are wont to do, A Head Full of Ghosts drew the interest of Hollywood as Focus Features optioned the project. The Cabin at the End of the World was also optioned for film, this one before it was even finished. That book was also the winner of the 2019 Locus Award for Best Horror Novel. 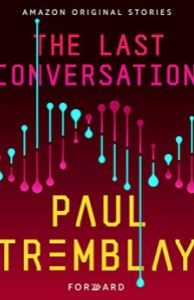 This was Tremblay’s addition to the Forward collection on Amazon and he shows why he was selected with an excellent story here.

The story asks and answers an impossible question, what’s more frightening: Not knowing who you are? Or finding out?

A man wakes up with no memory of who he is, how he got to where he is, or anything else. The only thing he knows is the voice of the person that is trying to help him. Dr. Kuhn is his caretaker and here to help him remember and re-claim what was lost. Are we sure that’s a good thing? Is he sure that he wants to know? 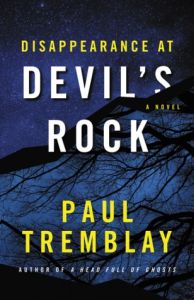 A mother’s worst nightmare is what kicks off this story as Elizabeth Sanderson finds out that her son Tommy has vanished without a trace in the local woods and the search to find him isn’t going well.

Nothing is going right for Elizabeth and nobody seems to be helping her. All she knows is that her son was hanging out at Devil’s Rock with a couple of friends, friends who don’t seem to be telling the whole truth.

One night, she believes that a ghost of her son visits her in her room while her daughter thinks she sees a shadow looking in her window. Is Tommy visiting them? Can he help them find out what happened to him? Elizabeth is lead to a diary that tells her more about her son than she knew and offers clues as to what may have happened. 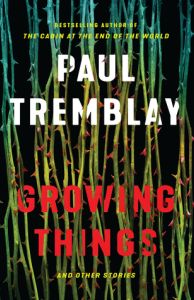 Tremblay made his name as a writer of short fiction and this collection captures some of his very best work throughout his career. The book features many scares as it is a great collection of psychological suspense and literary horror.

The book features many great stories including “The Teacher” which was nominated for a Bram Stoker Award at the time. The story sees a student forced to watch a disturbing video that haunts her life as well as those of her classmates. Another interesting story is “Swim Wants to Know If It’s as Bad as Swim Thinks” where a daughter is kidnapped by her meth addict mother as a giant monster terrorizes the town. Or does it?

This collection does a masterful job of telling stories that take place on a worldwide scale and stories that scare us from within. 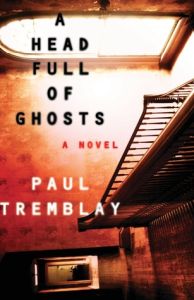 This book won the 2015 Bram Stoker Award for Superior Achievement in a Novel and after reading it, it’s easy to see why. A true horror classic that belongs alongside Stephen King’s The Shining and Shirley Jackson‘s The Haunting of Hill House.

The Barretts are a normal New England family who sees their life turned upside down when fourteen-year-old Marjorie begins to show signs of schizophrenia. The family tries everything and end up getting involved with a priest who suggest an exorcism. The family agrees and the priest contacts a production team that turns it into a hit reality TV show.

Fifteen years later, Marjorie’s younger sister is recalling the events to a reporter and finds that her memories go against the things that everyone saw on television. 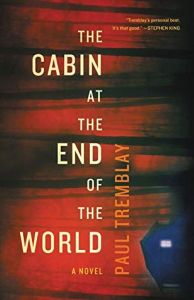 Adopted seven-year-old Wen is taken by her parents, Andrew and Eric, to a remote cabin for a vacation. The closest neighbors are meant to be miles away, but one afternoon a visitor comes to see Wen.

From that moment on, the book is ripe with tension and paranoia. As the apocalypse nears, this family is all that’s left between survival and the end of the world.

I will say however that the ending was very, very disappointing. An absolutely horrible ending in my opinion! However when I think back to it, this book just left the most impact with me and is the Tremblay book I find myself recommending the most. I do give the caveat that people will be disappointed with the ending but I believe it says something about the rest of the book that I still put it as my favourite book by Paul Tremblay. I understand why it ended that way but it just didn’t sit right with me.

Best Authors To Read If You Like Paul Tremblay:

Neil Gaiman: Nobody does dark fantasy quite like Tremblay and nobody does it quite like Neil Gaiman either. If you enjoy the scarier of Tremblay’s work, be sure to check out The Ocean at the End of the Lane which is Gaiman’s most terrifying work.

James Herbert: While he may lack the elegance of Stephen King’s better writing, James Herbert is right there with him and Tremblay when it comes to scares. The Rats scares with rats, man-eating giant black rats.

Peter Straub: A winner of the Bram Stoker Award, World Fantasy Award, and International Horror Guild Award; Peter Straub is a great horror writer. His Lost Boy, Lost Girl balances between the supernatural and serial killer in an expert way and shows him as a master of literary horror.

John Saul: This is an author that covered everything from the psychological to the scientific, the paranormal and the occult. His thrillers routinely appeared on the bestseller list and books like Suffer the Children are considered classics.

This Is Horror: An in-depth interview with Paul Tremblay from some true horror fans. This podcast delves into Growing Things, Survivor Song, and much more.

Books in the Freezer: A good interview with Tremblay where he discusses his books A Head Full of Ghosts, Disappearance at Devil’s Rock, and Cabin at the End of the World.