Known for his many genre novels, the American author Ray Bradbury was central to science-fiction. He was always an engaging and entertaining writer. His work ranged from horror to fantasy to mystery, as his stories were imaginative with something to say.

One of the most prolific writers within his field, too, he’d bring science-fiction to a broader audience, with his warm sense of wit and good humor evident throughout his novels. Shining a light on contemporary society’s issues, he was highly active throughout the middle of the twentieth century, writing many essays and critical pieces. He’d still ensure that his writing was entertaining, though, engaging his audience the whole way.

Starting out writing science-fiction short-stories for pulp magazines, the first one he’d publish would be Hollerbochen’s Dilemma, which was for ‘Imagination’ in 1938. During the 1940s, he wrote for several magazines, such as the famous ‘Amazing Stories,’ as he’d begin to develop a name and reputation for himself, leading to the world of literature beyond.

Later this would lead to him tying many of the short stories together, creating his first full novel The Martian Chronicles in 1950, connecting many of the stories as a fix-up title. Following this, he’d then create his infamous novel Fahrenheit 451, which would be a singular dystopian story published in 1953. Prior to this he would produce short-story collection, such as Dark Carnival in 1947, and later The Illustrated Man in 1951.

Following this, he would then see his work adapted for various mediums, with many films, TV shows, and serials produced from his fiction over the years. The Martian Chronicles alone has seen many different incarnations since its initial release, including a film, a radio play, comic-books, a video-game, an opera, and, perhaps most notably, a famous highly regarded television miniseries in 1979.

Fahrenheit 451 has also seen a similar amount of adaptations, from films to video-games, along with Something Wicked This Way Comes, which saw a Disney film in 1983. The episodic nature of some of his work has also lent itself well to television over the years.

His work on The Twilight Zone is indicative of this as well, having provided some episodes in the past. Winning awards, including a special citation for his contributions to the field of science-fiction in 2007 from the Pulitzer Prize jury, he’s a key figure within the literary industry with many career highlights.

These are my own personal top five novels from Ray Bradbury, and they’re ranked as follows: 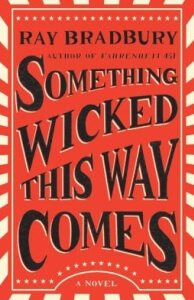 Heading to Green Town, Illinois, Cooger and Dark’s Pandemonium Shadow Show has set itself up. But, it holds a strange mystery and dark power over all who come into contact with it. Arriving just after midnight, the Carnival heralds the arrival of Halloween a whole week early, and a siren’s song that lulls all who enter with the promise of youth once more. That’s when two young boys enter and must face up to the nightmares that lurk within, as they begin to see the truth behind the smoke and mirrors.

As the second part of Ray Bradbury’s Green Town series, this title stands on its own two feet as something quite special. The characters are well-drawn, capturing the many complexities and nuances of real people, dealing with them in a fully rounded manner. Combining fantasy and horror, it’s a fun and entertaining read that’s accessible for younger readers, with plenty of whimsy and humor at its dark heart. 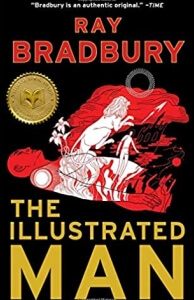 Meeting the Illustrated Man, the narrator here comes across an individual whose body is covered in tattoos, each of them seeming to come to life. Not only that but they all one story too, as this provides a collection of eighteen stories collected together. From virtual reality gone awry to stranded astronauts looking to get back to Earth, they are all told on the skin of the Illustrated Man.

Written through the 1940s and 50s, these are timeless tales that continue to resonate, each with their distinctive message. Combining horror, science-fiction, and fantasy, they manage to set themselves apart from everything else, creating an intriguing and immersive atmosphere. Imaginative and humorous, the stories stand the test of time, making for some funny and engaging reading that I’ll continue to come back to for years to come. 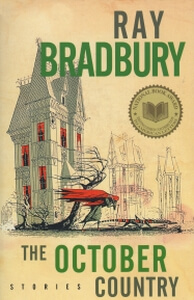 This anthology collects some of Bradbury’s previous short stories, bringing together tales of the macabre and the sinister for the first time. Collecting nineteen tales altogether, it brings in fifteen short stories from his previous ‘Dark Carnival’ collection in 1947 and a further four stories from elsewhere. Making for a complete compendium of his horror and fantasy, it’s a well-established omnibus, with some editions containing forewords from Bradbury himself.

Not so much science-fiction, this works to show another side to Bradbury’s style, clearly displaying his gift for horror and fantasy. Successfully creating some creepy and jarring stories, he establishes an atmosphere that fully envelops and immerses the reader. That’s not forgetting his signature imagination, which is more than evident throughout, with some genuinely creative well-told fiction on show here. 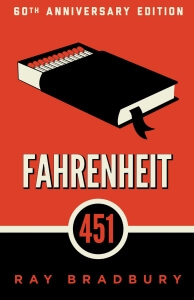 As a fireman living in a dystopian society, it is the job of Guy Montag to incinerate all books, including the houses where people have hidden them. In this world, the written word is an outlawed medium. Only television is allowed, as Guy lives with his two-dimensional wife Mildred and monotonous life and family. That’s when he meets the intriguing neighbor Clarisse who introduces him to a world beyond television and, just as he begins to question everything, his wife attempts suicide, and Clarisse disappears.

There’s a myriad of interpretations open for debate here, and therein lies the genius of the novel. Containing ideas of censorship in a society dumbed down, it tackles some broader concepts. It’s got some powerful themes at the heart of it, written compellingly as Bradbury famously wrote it at a frenetic pace. This sense of energy and vitality comes through on the page, making for an immediately attention-grabbing novel, instantly pulling the reader in and keeping them there for the duration. 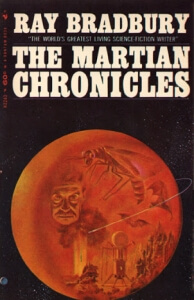 Following the colonization of Mars, this features several shorter-stories brought together as they chart humanity’s efforts to make a home upon the planet. Leaving behind Earth, which has been devastated by the ravages of nuclear war, they aim to create an idyllic new paradise for themselves. Dealing with the effects of militarism, religion, conformity, and censorship, while seeking to understand what goes into making a society, this book deals with many issues.

It worked for me in how it encompasses so much throughout the novel, looking at society from a high vantage point. Setting itself apart, the sheer scope of the story manages to push science-fiction to bold new heights. There’s so much here and, not only is the world-building to an extremely high standard, but the characters are too, as I found myself invested in the story.

Best Authors To Read If You Like Ray Bradbury:

Kurt Vonnegut: Also known for his sharp-pointed satire projected through the lens of science-fiction, Kurt Vonnegut was an imaginative storyteller. Often using humor to convey his message, whether it be the horrors of war in ‘Slaughterhouse-Five,’ or free-will in ‘The Siren’s of Titan.’ Still regarded today as one of the foremost writers within his genre, he’s a key figure for anyone wanting to learn more about the potential of science-fiction as a medium for communication.

Octavia E. Butler: American science-fiction novelist Octavia Estelle Butler was also an author with much to say through her writing and work. Getting to the heart of some serious social issues, she was a gifted writer while also being involved in the Black Power movement in her early years. With her politics and her writing intertwined, she’s become an important and noteworthy figurehead for socially conscious literature during the latter part of the twentieth century.

Philip K. Dick: Known as one of the pioneers of modern science-fiction, many regarded Philip Kindred Dick as a key figure within the genre. An American author, he would take it to new and interesting places, with his philosophical insights that were hugely influential on the medium. Many of his books have also gone on to see huge cinematic adaptations. With films such as Blade Runner and Total Recall, to name a few, his legacy lives on as one of the most influential.

Isaac Asimov: The American novelist Isaac Asimov is a name synonymous with science-fiction, writing novels that would continually raise important questions. Seen as one of the key figures active during the Golden Age of Science-Fiction, he would leave behind a powerful and important legacy. Asimov’s extensive literary criticism and groundbreaking novels would influence the field of science itself, along with many of his stories taken up by Hollywood.

Ursula K. Le Guin: Ursula Kroeber Le Guin was a central figure in fantasy and science-fiction, creating her unique style in the process. Often writing speculative fiction, the American novelist would feature utopian societies looking at larger questions facing society and humanity as a whole. Prolific as she was imaginative, she created vast and expansive worlds that would immerse the reader, always delivering a strong message along the way.

Stars On Suspense (Old Time Radio) – Ray Bradbury: Performing some of his stories, this is a fun alternative look at the work of Bradbury. The show is entertaining for its time, with three stories in total performed.

The Forum – Ray Bradbury: With a panel of academic experts looking back on the life and work of Ray Bradbury, they examine what it was that made his writing stand-out. Getting to the heart of his career, it’s an illuminating insight into the ideas behind his stories.

Legacy: the Artists Behind the Legend – Ray Bradbury: Taking a look behind Ray Bradbury as an author, this examines his life in closer detail. Studying who he was, this looks at the impact of his legacy and what he meant as a writer.