Octavia E. Butler is considered a pioneer in science-fiction writing as one of the first female African-American writers to draw success in the genre. She was Hugo Award and Nebula Award winning as well as the first science fiction author to be awarded a MacArthur fellowship.

As a young writer, her mother played a very influential role in her early days as a writer. As a young girl she had no idea that being a writer was even a career that was available to her, but her mother began encouraging her to do it from a young age. A great story about her mother is that she once spent more than a month’s rent for an agent to review her daughter’s work.

Butler’s breakout came at the Clarion Science Fiction Writers Workshop. She was encouraged to go by writer Harlan Ellison who she met during an Open Door Workshop. He was so impressed by her work with that he contributed $100 towards her application with her mother forgoing dental work to pay the rest. Butler would go on to sell two stories here which got her career started off on the right foot.

Her first book was The Patternmaster which was the first book written in what would become the Patternist series. That book takes place in a distant future, but chronologically the series actually starts with Wild Seed which is one of her most popular novels. The series works on a number of complex themes including racial and gender politics, biological engineering, power, and ultimately, what it means to be human.

Butler’s work has drawn praise for tackling issues like power, sexism, and racism head on; and for building better worlds through science-fiction. Her writing style always dealt in empathy and the character’s needs to build community which led to her having a bigger reach outside of science-fiction.

Her lasting legacy will be inspiring generations of writers of color that they could be writers too and that their stories were worth telling. Her books live as proof that they were. 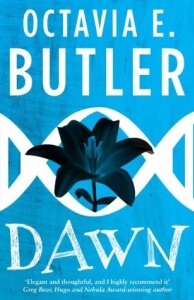 Lilith Iyapo has seen the end of the world. The planet lost their final war and she knows her son and husband were killed in the atomic fire that consumed the planet Earth. That was hundreds of years ago now and Lilith is on an alien spacecraft heading back to Earth. The Oankali, a race of aliens, have kept her and other survivors asleep for centuries with plans to save humanity. Only their plan features them genetically merging with the humans – whether they like it or not. The book tells of a future of humanity that is not exactly what they had planned.

This book is just classic Butler as it asks may deep questions that will have you thinking long after you read the final page. The questions don’t have clear answers and can be interpreted many different ways. Lilith is a strong, human character that has to deal with change in ways that no human has had to before and that change really drives this story. 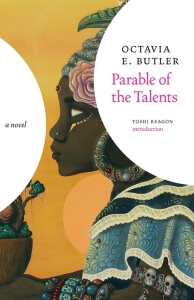 This is the second book in the Parable series and the sequel to Parable of the Sower. The book takes place after the events of the first book and tells the next chapter of that story. Lauren Olamina is still working on developing her religion Earthseed, when a political change in the world has devastating effects on her and her community. New President Andrew Steele Jarret has hopes to “make America great again” and that has empowered people who wish to destroy other religions. While Lauren Olamina and her people are dealing with this in their time, we also have the story of her daughter’s life, told by her daughter Asha, in the future.

This book is at the same time hopeless and hopeful, dark and light. There are parts that are so dark, so disgusting in their portrayal that you want to put the book away and forget that you ever read it. If you are able to hold on and get past that, you can find some wonderful moments of lightness and the innate desire to be good that exists in so much of humanity. After reading the first book I wasn’t sure that a sequel was needed, but after reading this I was glad that it does. 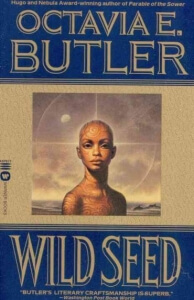 This is the first book in the Patternist series, but it wasn’t actually written first. However, chronologically it is considered to be the first book in the series. The book starts in 1690 where Doro, an immortal being, who takes over people’s bodies and kills them in the process. He comes upon an African village where he meets Ananywu. She is also immortal, but she does it through healing and shapeshifting. The two are polar opposites and have a complicated relationship that carries them nearly 200 years in this book.

Wild Seed is an easy read, but it has so many complex themes working throughout the book. Race, slavery, gender, sexuality, power structures, and the battle of good and evil are all key parts of this story. Doro works to create a race of people with special powers and seeks ultimate control, something that Anyanwu won’t give him. The relationship is rife with complications, which is only enhanced by their immortality. 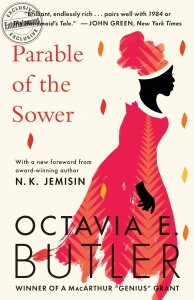 Lauren Olamina is the daughter of a preacher who lives in a walled-in community on the outskirts of Los Angeles. The world is more dangerous than ever as economical issues have driven the United States to the brink of apocalypse. Her father does her best to keep the community intact, but Lauren knows that the outside world is knocking at their door and works to prepare herself for a life on the outside. She also works on Earthseed which is her own religion. While doing all this, Lauren has to hide her “hyperempathy” which makes her feel what others are feeling in intense ways. In her world, everything that can go wrong will go wrong and she will have to make her own way to survive.

This book is so powerful as the world is being driven towards insanity, the most powerful thing in the world is sanity. Lauren is alone in many ways throughout this book which makes the connections she does make even stronger and more meaningful. Lauren’s dedication to her ideas at first feels like a young girl’s fantasy, but as we go on we see her ideas taking shape and gaining strength. Turning into something that is worth believing in, even as the world grows more and more dangerous all around them. A fantastic read that is just as prescient now as when it was written. 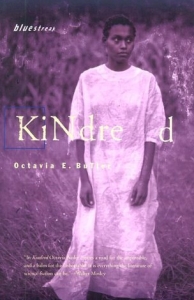 This book is considered to be Butler’s masterpiece and one of the most powerful pieces of science fiction out there. The book sees a young woman named Dana living in 1970s California with her white husband. She is celebrating her twenty-sixth birthday when she is transported back to the antebellum South where slavery is in full effect. A boy is drowning and she saves his life befor being sent back home. It doesn’t take long before it happens again – and again, with each trip getting long and more dangerous.

Few books have told a better story of the time of slavery and how dark, awful, and scary that time could be. The book does an outstanding job of teasing us that these characters will rise above their time and do the right thing, but the harsh reality of slavery is always right there to knock those ideas from your mind. Dana’s journey gives a better understanding of slavery than many other pieces of media on the topic. Butler takes Dana through hell in this book and the reader comes out stronger on the other end for reading it.

Best Authors To Read If You Like Octavia E. Butler:

Ursula K. Le Guin: Le Guin was first published in the 1960s and her future (or fantasy) stories have always done a good job of tackling topics like politics, environmental issues, gender, religion, and sexuality. She is a multi-time Hugo, Nebula, Locus, and World Fantasy Award winner. The Left Hand of Darkness is a must read by Le Guin. The book tells the tale of a human ambassador heading to an icy planet where gender is fluid and they live without sexual prejudice.

N. K. Jemisin: The influence on Jemisin from Butler is easy to see and she is one of the most influential writers of speculative fiction to come along in a long time. She won the Hugo award for The Fifth Season, the first book in the Broken Earth series. The book takes place in a dystopian future Earth where there are people with the power to control the earth.

Ben H. Winters: Underground Airlines is a book that you can see the influence of Butler through and through. The book sees an alternate reality where the Civil War never happened and how that affects the world in modern times. Racism exists everywhere, but especially in the “hard four” states where they have never moved past slavery. The Underground Airlines is a abolitionist movement that a black man named Victor, a bounty hunter, must infiltrate to find his latest target.

Toni Morrison: Fans of Kindred would do well to read Beloved by Morrison. The Pulitzer Prize in Literature winning book is a great American novel and a must-read. The book follows a former slave who risked everything to escape from slavery and it ended up costing her everything. A painful, but important read.

Nnedi Okorafor: Okorafor is another award winning fantasy and science fiction author. She holds a PhD in literature and creative writing and also works as an associate professor at the University at Buffalo, New York. One her best books is Akata Warrior which does a fantastic job of merging fantasy and mythology with modern day Nigeria. The book sees an American-born Nigerian girl being inducted into the secret Leopard Society and being chose to help avert an apocalypse.

Radio Imagination: This is a podcast completely dedicated to the legacy of Octavia E. Butler. Each episode is about her, her life, and her work.

Octavia E. Butler Studies: This show features leading experts in the field exploring the way that Butler’s work help to foster a deeper understanding of our past, present, and possible futures.

Octavia E. Butler and Her Rules of Writing: Write Pack Radio explores the rules that Butler used for writing. The podcast takes a look at the rules of writing and mistakes that are made by writers while looking at them through the view of Butler’s career and rules she wrote by.