Taking fantasy into real-world settings, Neil Gaiman has revolutionised the genre of ‘urban fantasy’, creating a quirky voice all of his own. Instantly recognizable, his work has a sense of the Gothic about it, combining numerous styles and genres, establishing his own unique niche. Writing across a number of different mediums, from graphic-novels and comic-books, to novels and screenplays in both film and television, he’s a highly versatile writer. Incorporating a variety of different elements into his work, including comic satire, folklore and mythology, and contemporary fantasy, his idiosyncratic style is hard to pin down. Alternating between flowery almost ethereal prose, he never quite goes over the edge, pulling himself back to a more straight-forward working pace that’s never indulgent. This has also seen him create a visual style of his own, which has lent itself well to his work in comic-books, as well as in television and film.

Releasing his first novel in 1990, Neil Gaiman would make his debut with the novel Good Omens, which he would write in collaboration with Terry Pratchett. Prior to this he would work in comic-books, forming a friendship with the writer Alan Moore, as the two of them would have a mutual respect for one another. When his first novel came out it was well received, as it would be a quintessentially British comic story of a clash and friendship between an angel and demon over the entirety of human history. With Terry Pratchett already being a well regarded author within the comic fantasy genre, their styles would meld together well, in what was a fun and inventive story, one that’s recently been adapted for television by Amazon.

Over the years Neil Gaiman has had a strong relationship with film and television, with many of his other stories being adapted too. These would include films of Coraline, and Stardust, along with television shows such as American Gods. Working in radio too, many of his novels have been adapted by the BBC, as well as conducting regular public readings of his work too. Winning numerous prizes, such as the Bram Stoker, the Hugo, and the Nebula awards, he’s gained a great many plaudits throughout his career. During this time there’s also been a number of noteworthy highlights, as his work continues to generate discussion from fans all around the world.

My own personal top 5 Neil Gaiman novels are as follows: 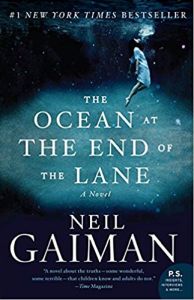 Set in Sussex, England, a middle-aged man returns to his childhood home for a funeral, and that’s when the past floods back to him. Remembering Lettie Hempstock, he looks into the pond behind the farmhouse that she once claimed was an ocean all those years ago. It was also forty years prior that a man would commit suicide in a stolen car nearby, an event which would unleash a darkness that would come to engulf the life of young boy, leaving Lettie to protect him.

A sweet natured story that echoes universal feelings of childhood throughout, this has a real nostalgic feeling to it. That’s not to say that there isn’t Gaiman’s trademark darker edge underlying the story, but it doesn’t overbear it, keeping it light and breezy. Washing over the reader, it’s a meditative novel on looking back, contemplating the past, and allowing the reader to come to terms with it. 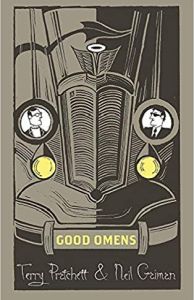 ‘The Nice and Accurate Prophecies of Agnes Nutter, Witch’, written in 1655 right before she exploded, stated that the world will end next Saturday, prior to dinner. Now the forces of Good and Evil must amass, with Atlantis rising from the seas once again, in a showdown to end all showdowns. It would seem that the Antichrist has been misplaced though, and an angel and demon cast down to Earth since the beginning of mankind, have grown to like living there, despite God’s Devine Plan to see Armageddon through.

Exploring the nature of good and evil, this is a thorough examination of a variety of different concepts, covering a lot of philosophical ground. For many writers this would be difficult subject matter to tackle, especially when looking to make accessible as clearly as it is here, but this succeeds in many ways. Making it funny and engaging, with plenty of jokes and clever wordplay along the way, the ideas here are really brought up a level. 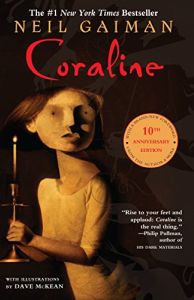 Young Coraline has moved into a new house and, with her parents busy, she decides to go exploring, finding her way through the old home. That’s when she discovers a small door with a brick wall on the other side going nowhere, that is until it goes somewhere one night. On the other side of the wall down a tunnel is a netherworld, one in which her ‘other’ parents reside, with it looking much like hers, except they seem to want her to stay, and the voices of other children in the walls leave her feeling unsettled.

Geared more towards younger readers, this modern day fairy tale still has its moments of darkness, with a somewhat spooky and surreal undertone to it. Smaller children may find it scary in some places, but it manages to capture the imagination in a manner quite unlike any other. It would also become a graphic-novel, as well as being adapted for the big-screen in the impressive 2009 stop-motion animation of the same name. 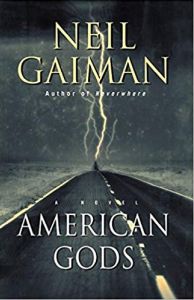 The wife of Shadow, Laura, dies horrifically in a car crash, as he must then make his way home, boarding a plane to find none other than Mr Wednesday who claims himself to be a former god. Telling Shadow that he’s a refugee from a now distant war, the two of them take a car journey across America, one which neither of them will forget. Discovering a whole host of different characters, the past catches up with the present, as Shadow finds himself in a whole new world.

This will come as no surprise for fans of the author, with it being widely regarded as one of his most seminal pieces. Combining classic mythology with the modern day, this expertly updates a lot of older ideas, making them work in our modern times. It’s the imagination again that is most impressive here, taking in the scope of Gaiman’s vision, one that would later be adapted into an equally successful television series. 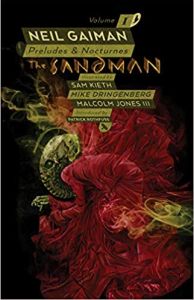 This follows Morpheus, also known of as Dream, who is one of the seven Endless, along with Delirium, Death, Desire, Destruction, and Despair. Ruling over the world of dreams, Morpheus presides over all dreams and stories, with his appearance altering depending upon who’s viewing him. Over the course of the series a number of different characters are brought in, as metaphysical concepts and constructs are brought to life on the page in this epic fantasy.

With the first issue released in 1989, this comic was regularly published until it’s final issue in 1996, and an omnibus edition of the work being released in 2013, with it being in three parts. Sprawling with extensive world-building, this is the one that Gaiman will be most remembered for, with it being his ultimate career defining masterpiece. The series would later be followed up with The Dream Hunters in 2009, returning again with Overture in 2013, which ran to 2015, making it one epic that’s not to be missed.

Best Authors To Read If You Like Neil Gaiman:

Terry Pratchett: Working with him for his debut, Gaiman would take a lot from the work of Pratchett, as it would come to inspire his own stories in the years to follow. With his idiosyncratic brand of humour featured throughout, he is perhaps best known for his Discworld series of comic fantasy novels. Definitely worth reading, with his profound insights and in-depth understanding of some of the deeper issues, it features scores of jokes throughout.

Ben Aaronovitch: Writing the River’s of London novels, Ben Aaronovitch is both a novelist and screenwriter, creating vast and rich fantasy worlds. Producing numerous comic-books, along with television work as well, he’s well regarded in his gift for storytelling, with his visual style. Combining the police procedural with more supernatural elements too, he’s a master of his craft, offering something that’s quite different, much like Gaiman.

Susanna Clarke: Partly discovered by Gaiman who helped bring her work to fruition, Clarke would be enormously influenced by him and his work. Writing fantasy stories, she made her debut with the novel ‘Jonathan Strange and Mr Norrell’ in 2004, making her mark as an important novelist in her own right. Employing a number of different styles within her work, her imagination is extensive, boasting an impressive sense of scope and scale.

Douglas Adams: Very much British in both his outlook and tone, Gaiman has cited him as a huge influence on his novels, going so far as to write an official companion to Adam’s work in 1988. With a whole host of ideas featured throughout his stories, he was a science-fiction writer with a deep passion for philosophical ideas and constructs. His work would also see television and film adaptations, along with his highly regarded radio series for the BBC, as well as his much loved text adventure video-game.

Diana Wynne Jones: Producing science-fiction and fantasy novels, British author Diana Wynne Jones had a unique and fascinating way of looking at the world, much like Neil Gaiman. She would create the well loved ‘Howl’s Moving Castle’ series of books, which would go on to become an equally loved Studio Ghibli animated film. With a lot of sharp social observations in her work, she would also inflect her work with plenty of comic moments, making her stories witty, inventive and fun.

Happy Sad Confused – Neil Gaiman: A laid-back casual interview with Gaiman himself, it’s an accessible and easy going show. Informative and fun in equal measure, it provides a clear insight into his creative process as an author.

Wizard and the Bruiser – Neil Gaiman: The two hosts break down the work of Neil Gaiman in a fun and irreverent approach for this episode. Giving insight into his work, it brings up a number of themes and ideas prevalent in his work.

Events at the Apple Store – Neil Gaiman: Meet the Author: Speaking directly about his work, this features an interview between Neil Gaiman and the journalist Marina Hyde. There’s also a supplementary video available of it all too.