Eoin Colfer is an Irish author who is best known as the writer of the popular Artemis Fowler series. That book series has multiple entries and was even adapted into a film called, you guessed it, Artemis Fowl.

Colfer was born on May 14th, 1965 in Wexford, Ireland. He attended Dublin University and earned his degree to be a primary school teacher. His father was a teacher and he hoped to follow in his father’s footsteps and teach in Wexford. However, that didn’t last long as he and his wife moved around the world fr her teaching career. They spent time in East Africa, Asia, and Italy over that period of time. Colfer and his wife have two children and they split time between Wexford, Ireland and the south of France.

Eoin’s experience in East Africa is what lead to him writing his first book, Benny and Omar. That book sees two very different cultures colliding as an Irish sports fanatic named Benny is forced to move to Tunisia where he makes friends with a local boy named Omar. Colfer found that he enjoyed writing for children and he felt that his experience with students with learning disabilities and emotional challenges gave him a particular insight into children’s humour and what they are interested in reading about.

Colfer came up with his greatest success, Artemis Fowl, by trying to write a book that was “Fairies meets Die Hard” and he succeeded. The series is a great introduction for kids who are interested in checking out science fiction/fantasy and the series continues to grow in popularity as the years go on. The success of that first book in the series is what allowed Colfer to give up his career as a teacher to focus on his writing career full-time.

He hasn’t only written the Artemis Fowl series as he also has the Half Moon Investigations series, the W.A.R.P. (Witness Anonymous Relocation Program) series, and The Supernaturalist series, among others. 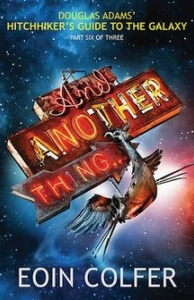 This book is the sixth entry in the Hitchhiker’s Guide to the Galaxy trilogy which if you’ve read the books, you fully understand why that is. Before his death, Adams stated that at some point he would write a sixth book because he felt like five seemed like the wrong number. After he passed away, his wife gave permission to Colfer to write that book.

This book sees the Vogons returning to finish obliterating Earth in our universe and all alternatives. While Arthur Dent and his companions are hitchhiking on the Viking longship of Wowbagger the Infinitely Prolonged. Wowbagger is an immortal with a death wish and a talent for insults.

Colfer’s addition got some tough reviews from die-hard Douglas Adams who were unlikely to accept anything but the man himself. That said, the book does put a bow on the series and gives the series some closure after Adams’ passing. 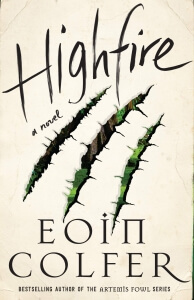 This book is Colfer writing for adults in his own unique way. The book follows a vodka-drinking, Flashdance-loving dragon who lives an isolated life in the bayous of Louisiana and the fifteen-year-old troublemaker on the run that he meets.

There was a time when Vern was a great dragon who flew the skies and scorchen angry mobs, but that was a long time ago. Now he hides from swamp boat tours in Louisiana and tries to stay relaxed on his recliner. The dragon has been reduced to binging Netflix and drinking vodka while trying to lay low. Despite the sad existence, he has survived which is more than he can say for the rest of the dragons.

Squib Moreau is trying to survive and decides to take a job as a smuggler, but on his first night on the job he sees his boss murdered and now he’s on the run from the dirty cop he saw do it. When the cop comes after him, Squib is rescued by a dragon. The two strike up an unlikely partnership and soon find themselves in wild circumstances. 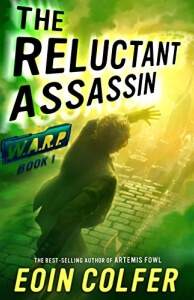 This book introduces us to a seventeen-year-old FBI agent named Cheveron Savano. She is sent to London where she thought that her mission would be a rather boring one, but it has turned out to be anything but with dead scientists, scrappy would-be assassins, and a malevolent Victorian illusionist.

The FBI’s system of using time travel to hide witnesses in other times, Witness Anonymous Relocation Program (W.A.R.P.), has really backfired on them. Cheveron is taken back to Victorian times where she meets a fourteen-year illusionist apprentice named Riley is left in a tough kill or be killed situation with his master. He manages to find his escape in time travel as he heads from Victorian times to present day England. The boy’s master follows him to the modern times though and he is more dangerous than ever in the future. 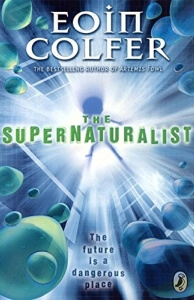 The Supernaturalist is a cautionary tale about the a future dystopia where cities themselves have become for-profit businesses with even orphanages expected to turn a profit. The kids at the Clarissa Frayne Institute for Parentally Challenged Boys are forced to take part in product testing that can cause injuries and the life expectancy of the kids at the orphanage is only fifteen years old.

Cosmo Hill is one of the boys at the orphanage at the age of 14, he knows that time isn’t on his side. He plans to make a run for it and plans an escape. That doesn’t work out as he plans and he nearly dies in the attempt and a blue creature begins to feed on him. His life is saved when he is rescued by the Supernaturalists, a group of young people who have dedicated their lives to destroying the Parasites. Cosmo can see them and joins the hunt, but what if the Parasites aren’t evil at all? What if they are good? 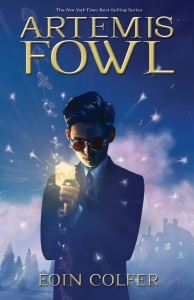 Colfer’s Artemis Fowl is not exactly the boy hero that you expect to find in books like this. It has gotten unjust comparisons to the Harry Potter books, but is much different. For one, he’s not a traditional here. Instead, he’s a criminal mastermind and antihero that is trying to restore his family’s fortune.

His plan to get the money back involves going after the Fairies and kidnapping one of them for a major ransom. Artemis has no problem with kidnapping, violence, or even drugging members of his own family to get what he wants.

The fairies are extremely high tech in this book and his plan goes awry from the start. He may have underestimated the power of the fairies and instead of getting a huge ransom, he may have just started a huge cross-species war between the humans and the fairies.

Best Authors To Read If You Like Eoin Colfer:

J.K. Rowling: The comparisons of the Harry Potter series and the Artemis Fowler series are often unfair and, frankly, a bit silly, but it’s still worth saying that if you enjoy one then you might enjoy the other.

It’s hard to go wrong with the first book in the classic series, Harry Potter and the Sorcerer’s Stone where Harry is first introduced to the world of magic and finds out about where he came from. The world is so light and fun which really helps to set up how dark things would get later.

Trenton Lee Stewart: Stewart’s The Mysterious Benedict Society would fit right in alongside any of Colfer’s books as it tells the story of children who are doing extraordinary things, a constant theme in Colfer’s books.

A newspaper advertises for “gifted children looking for special opportunities” and gets a ton of responses. The children who answer the ad are given a series of mind-bending tests that the readers take as well. There are only four children, two boys and two girls, that succeed and they are asked to go on a secret mission that only they could go on.

Douglas Adams: Colfer was famously selected to continue the work of Douglas Adams after his death and the reason why he was selected seems rather obvious. The two both had a way with words and absurdity that jumped off the page.

Adams’ The Hitchhiker’s Guide to the Galaxy is a classic for a good reason and even if you’ve read it, now might be the time to go back and visit it. The book starts with Earth on the verge of being demolished, but Arthur Dent doesn’t have a clue. He’s worried about his house that is about to be demolished. Arthur is saved by his friend Ford Prefect who turns out to be an intergalactic hitchhiker and he takes him off to space just before the Earth is no more.

Percy Jackson and the Lightning Thief introduces us to the title character who seems like a bit of a loser early in the book. As it turns out, he is actually half-God as his father is actually Poseidon, the god of the sea. Percy starts to find out more about his past just as a war is erupting between the gods. Percy and his friends will head to the Underworld to try and stop it from happening.

James Dashner: Another blockbuster series is The Maze Runner by James Dashner. The series is a good one for readers of Colfer’s younger age books to advance to as they head to middle school and beyond.

The first book sees a boy named Thomas wake up in an elevator with no memory except for his own name. He arrives in a world of 60 boys who have learned to survive in a closed environment, completely sustaining themselves. There is a maze that surrounds their living space and the kids are desperate to find a way to escape, but some are losing hope.

Author Stories Podcast – Eoin Colfer Interview: Hank Garner has done multiple interviews over the years with and has Eoin Colfer on this episode to discuss Highfire and the rest of his career.

: The Dragon Babies podcast re-read the first book in the Artemis Fowl series that they loved when they were young and revisit it here.