A New York Times bestselling author of mystery and thriller novels, the American writer Stuart Woods has created a vast and extensive backlog of work, complete with a range of colorful and iconic characters. Perhaps best known of these is his Stone Barrington protagonist, working in a law firm, as he’s independently minded and driven towards fighting for justice, having formerly been a detective who constantly disagreed with his superiors. There would be many characters like this, including his ‘Holly Barker’ and ‘Rick Barron’ novels, along with his books written with fellow mystery writer Parnell Hall, such as ‘Teddy Fay’ and ‘Herbie Fisher’. Working in advertising prior to becoming a novelist full-time, he’s got a direct and engaging style of writing that immediately grabs the reader’s attention.

Originally working as a sailor, Woods would gain the attention of publishers with his first-hand experience of participating in the ‘Original Single-Handed Transatlantic Race’, or OSTAR, providing accounts of his nautical knowledge. It was from this he would go on to create his first novel titled Blue Water, Green Skipper in 1977, telling the true story of his transatlantic trip the previous year. Later he would go on to create many much loved works of fiction, such as Stone Barrington’s series, which would begin in 1991 with New York Dead. There would be fifty-two books in the collection featuring the New York City attorney Stone Barrington, as he’d go on to create other series, such as Holly Barker in 1998 with Orchid Beach. These would feature the Chief of Police, Holly Barker, working in Florida, as they’d also be thriller novels, much like many of Woods other stories.

In 1983 there was a television miniseries of his 1981 novel Chiefs, which would star Charlton Heston. His serialized formula has proven to be enormously successful, garnering him many awards, from the Edgar Award for Best First Novel, to the Grand Prix de Litterature Policiere in 1997. Over time he’s had many notable highlights in his literary career, with plenty of novels that stand out from the rest.

My own personal top five Stuart Woods novels are as follows: 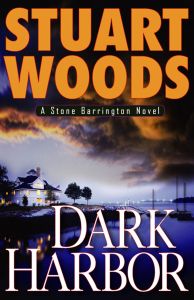 Travelling to Dark Harbor in Maine, Holly Barker and Stone Barrington have teamed up once more to solve their latest case. This time it concerns the mystery surrounding the death of Stone’s cousin, Dick, who has been murdered along with the rest of his family. Initially believing it to be a murder suicide, the authorities have now closed the case, but Stone learns otherwise after being told that Dick was actually secretly working for the CIA and had just been given a promotion, leading Stone to look closer.

This is a fun and knowing mystery adventure that engages its audience at every level, doing exactly what it sets out to do. With it being the twelfth book in the series too, it works well at further establishing the characters, especially that of Stone himself. The world of Stone is also well crafted, building upon what came before, and evolving it, whilst also raising the action giving the readers more of what they’ve now come to expect from the series. 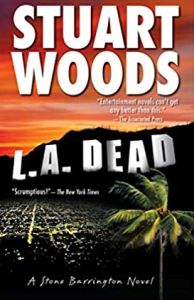 Taking place in LA, New York detective Stone Barrington heads back there, cutting his planned wedding in Venice short. A former lover of his stands accused of murder after a Los Angeles celebrity, her husband, has been found shot dead. Rushing to the defence of Arrington Calder, his previous partner, Stone uncovers a world of corruption amidst the sunny hills of California.

This flows along extremely easily, as Stuart Woods has a brisk and laid-back style of writing that carries the reader along. Keeping the mystery until the very final page, it manages to hold the audience’s attention, not letting anything go too early. With it being the sixth title in the series, it manages to draw upon what came before, with its already firmly established characters and world. 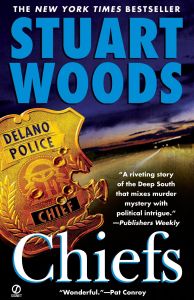 Set in 1920, the body of a teenager is discovered in Delano, Georgia, found beaten in what appears to be a ritualistic fashion. The failed cotton farmer now appointed as the first chief of police for Delano, Will Henry Lee, must get to the bottom of the case. This sets in motion a story that sees the small-town dealing with a further three police-chiefs throughout the intervening decades, as they all set about solving the crime and the motivation behind it.

With the seemingly placid and gentle community giving a veneer of respectability, it’s what lies beneath that Woods so expertly exposes. Looking at political power he gets to the darkened heart of what drives some people to do what they do, in the first of the Will Lee series. Also made into a television mini-series in 1983, this one of Woods’ most beloved creations to date, as there’d be seven books in total. 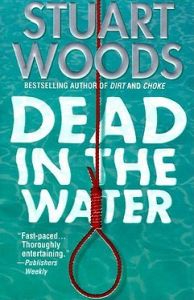 Spending a vacation in St. Marks, Stone Barrington meets a young woman who sails in alone aboard her large yacht. Quickly she gains the attention of Sir Winston Sutherland heading the local authorities, as he’s suspicious given she left the other side of the Atlantic with her husband who’s now gone. Defending her, Stone must contend with Sutherland, a man whose motives seem unclear, as it appears that there may be more to this case than meets the eye.

This is genre fiction at its best, as it really has fun with the subject matter, with its use of intrigue and suspense. Woods also proves himself to be a master of the surprise twist, with the story constantly turning on every page. Undestanding exactly what he’s doing, this is definitely one for not just followers of the author, but fans of the genre too. 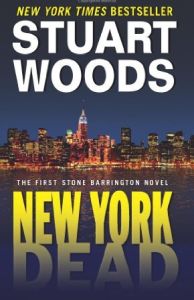 Told by everyone around him that he’s to smart to be a cop, Stone Barrington witnesses an event on the street that will turn his whole life around. Becoming a celebrity overnight, he soon finds himself mixed up in the life and death of one of the countries most beloved television anchorwomen; Sasha Nijinsky. This then leads him into a web of lies and deceit, as the case begins to take over his entire life and being, with the face of the once living anchorwoman haunting him at every turn.

Setting up the Stone Barrington series, this goes about expertly establishing his character, in the first and best of the franchise. With a whole host of twists and turns, the reader is left never knowing exactly what’s going to happen next. This is a great introduction not just to the character of Stone, but the work of Woods as a whole, as it really showcases what he has to offer.

Best Authors To Read If You Like Stuart Woods:

Robert B. Parker: Writing a lot of detective fiction during his lifetime, the American novelist Robert B. Parker was well known within the field of mystery fiction. Changing the shape and direction of the genre, he’s been cited as a major influence by many famous authors, with one of his most famous creations being ‘Spenser’. He would also contribute greatly to film and television, with much of his work being adapted for the screen, including the long-running show ‘Spenser: For Hire’.

David Baldacci: A bestselling author of American thriller novels, David Baldacci is a writer with a great sense of atmosphere and ambiance. Often using shadowy conspiracies as the pretext for many of his novels, he really knows how to evoke a feeling within the reader. Versatile and gifted in the art of suspense, he’s written many books over the years, with plenty of them being adapted for cinema too, including his debut novel ‘Absolute Power’ in 1997.

Lisa Scottoline: Mainly focusing on legal thrillers, Lisa Scottoline is an American author who writes with a lot of authenticity, largely due to her own experience within the field of law. Similar to Woods, she knows how to build tension within the reader, whilst taking it slowly and gradually building it throughout until it reaches boiling point. This formula has proven to be hugely successful with readers worldwide, gaining her a great deal of fans.

Jonathan Kellerman: Largely writing crime novels, Jonathan Kellerman is a highly prolific author with a long and illustrious career. Knowing exactly how to build an air of suspense and mystery, he’s gifted at mounting tension, with constant twists and turns on every page. His character of Alex Delaware, a child psychologist and consultant for the Los Angeles police-department, is perhaps his best known series to date.

Edna Buchanan: Previously working as an American journalist, the writer Edna Buchanan is now best known for her crime and mystery novels. Winning a Pulitzer for her reporting prior to becoming a novelist, her work shines with a high degree of authenticity thanks to her background. With believable characters and stories, she pulls the reader in, immersing them in her world, constantly keeping them guessing.

Just One More Chapter Podcast & Book Club – Stuart Woods: Interviewing Woods on his fiftieth Stone Barrington novel, this gives a fascinating insight into the character and his creation. It also allows Woods to speak about his own creative process too.

WFSU Podcast – Stuart Woods: A quick look into the work of Stuart Woods as he releases his 51st Stone Barrington novel. With words from the author himself, it’s a brief snippet on his work and political output.

Game of Books – The One, Shoot First, and Murder in G Major: Looking at a range of different books, the hosts break-down Wood’s novel ‘Shoot First’. Going over his work, it provides a clear third-person perspective of his stories.