Creating worlds that twist and turn, British writer Jodi Taylor has been capturing imaginations with her inventive fantasy and science-fiction for some time now. She’s a gifted and funny writer, creating stories filled with both warmth and wit, all whilst taking the reader on a journey. Whether it’s time-travel or basic human relationships, she really knows how to keep her audience invested every step of the way. Her books appeal across generations too, with her writing being highly accessible, as well as being addictive to read.

Starting out with her ‘Chronicles of St. Mary’s’ series, Jodi Taylor would begin with the novel Just One Damned Thing After Another. Not only beginning her main franchise, it would also introduce her as a writer, following this up not long after with A Symphony of Echoes that very same year. She also came out with The Nothing Girl in 2014 the following year, which begun the ‘Frogmorton Farm’ collection which many consider fairy tales for adults. Later she’d create a St. Mary’s spin-off series titled ‘Time Police’, starting with Doing Time in 2019. Her ‘Elizabeth Cage’ novels would begin in 2017, with White Silence, and she would also write a stand-alone under the name of ‘Isabella Barclay’ in 2015 titled A Bachelor Establishment.

All this has led to her being one of the fastest rising stars in the world of science-fiction and fantasy, as she continually reaches the top of the Amazon bestseller lists. Receiving top reviews from the likes of ‘Publishers Weekly’ and ‘Library Journal’, she’s also been a hit with the critics as well. Whilst she may have started in self-publishing, she’s gone on to be represented by the Headline Publishing Group. There’s a lot of notable highlights throughout her career, with more to come, making her a must for any fans of science-fiction.

My own personal top five favorites from the writing career of Jodi Taylor run as follows: 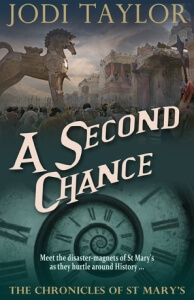 See at Amazon#5: A Second Chance (2014)
Nothing seems to be going right for Max, as she finds herself jumping from one time period to another, all whilst dealing with a number of personal issues. St. Mary’s Institute of Historical Research really is pushing him hard now, with their mission to observe important moments in history. As usual though, this doesn’t go entirely according to plan, as they find themselves constantly needing rectify their own mistakes during their time travelling.

It’s the third part in the ongoing ‘Chronicles of St. Mary’s’ novels, and it’s a great entry into a timeless collection of stories. Picking up steam here, I really enjoyed the novel, as it caught the energy of the first two books, whilst also elevating the world of the series. Here the characters came into their own, as I found myself locked in for the duration, eagerly anticipating the next title. 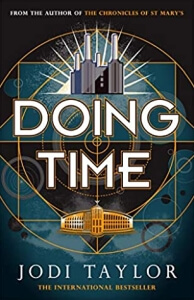 See at Amazon#4: Doing Time (2019)
In the future time travel is freely available to all, and this for the most part works out, except when it doesn’t. Then it’s time to call in the Time Police, an internationally sanctioned group who have every power at their disposal to get the job done. With the Time Wars being won by the Time Police, it seems all is well now, but this peace may not last for long when there’s so many willing to exploit time travel to their own ends.

Starting The Time Police series, this would be another exciting time travelling fantasy series from Jodi Taylor. Once again she does what she does best, balancing the many story strands, constantly juggling with expert precision, all managed with both wit and grace. Set in the same world as the St. Mary’s Institute of Historical Research, this would be a spin-off franchise following its own story. 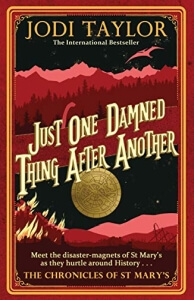 See at Amazon#3: Just One Damned Thing After Another (2013)
Investigating major events throughout history, St Mary’s is an institution hiding a massive secret involving time travel. As St. Mary’s Institute of Historical Research, they fly around history with the intention of documenting and observing it all in great detail. The only problem is that trouble seems to follow them throughout the ages, and try as they might to avoid it, they’re constantly coming across all manner of problem.

This was where it all started for The Chronicles of St Mary’s, and it would be remiss of me not to include it here. Showing a lot of promise from the outset, it’s clear that something big was underway, with all the pieces being firmly set in place. The humor is also great, as it’s funny all the way, with plenty of witty observations and well plotted characters drawing me in. 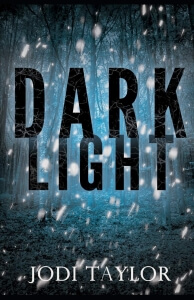 See at Amazon#2: Dark Light (2018)
Fleeing her home, Elizabeth Cage is on the run, alone and scared out of her mind, before arriving at the idyllic village Greyston. It is behind the facade though, that she soon finds herself being subject to an ancient ceremony that is marked in death. To top it all off, the Sorensen Institute also want to know where she is, as she continues to try and outrun them at every turn.

Constantly finding herself in trouble each step of the way, I found myself fully invested in the plight of Elizabeth Cage. Picking up from where the last book left off, this is the second title in the Elizabeth Cage series, bringing much of the same energy as before. I really enjoyed the instalment, as Taylor has a gift for making the reader feel as if they’re a part of the action, which was clearly evident here. 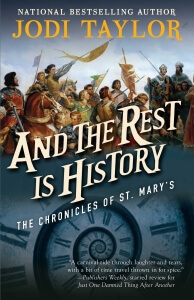 See at Amazon#1: And The Rest Is History (2017)
Mysterious events seem to be underway, ones even more mysterious than normal, as everyone is asking how they came to be. Then Clive Ronan turns back up in the picture, and it seems he hates each and everyone of the Institute, and they believe he has every right to. Bringing a trail of death and destruction, all whilst they journey to the great beyond once again in another adventure from the Chronicles of St Mary’s.

With this being the eighth title in the Chronicles series, it was definitely my favorite, as everything seemed to just fall into place. The jokes were all well plotted and thought out, and the story flowed along with ease, taking me along for the ride. I never felt bored at any single point, as it continued the arc of each of the characters, developing both them and the world expertly.

Best Authors To Read If You Like Jodi Taylor:

Genevieve Cogman: The British writer Genevieve Cogman is not only a fantasy author, but she’s also well known for her work with role-playing games. Prior to writing fiction, she’d create imaginative worlds for players to explore, something which she’d take into her work as a writer. Creating The Invisible Library series, she incorporates a number of different elements into her fantasy novels, making her one of the most versatile authors to date.

Ben Aaronovitch: A firm fixture within the field of British science-fiction and fantasy, Ben Aaronovitch is a highly gifted and imaginative author. Well versed as a screenwriter too, he’s a name known for his funny and creative style, plus his series, along with working on major franchises such as Doctor Who. Perhaps best known for his ‘Rivers of London’ novels, he really understands the format, producing witty and intelligent stories with a lot to say.

Jasper Fforde: With mind-bending concepts and twisting narratives turning every which way, British novelist Jasper Fforde is definitely a writer for those interested in fantasy. Taking the genre in different directions, he’s one of the most inventive authors currently out there, writing both short stories and novels. Often humorous, his work is heavily infused with comic sensibilities much like Jodi Taylor, making him extremely fun to read.

Sarah Painter: Coming from Scotland, the fantasy author Sarah Painter is well regarded for her imaginative fantastical worlds created. Writing urban fantasy and mystery novels, she’s largely known for her ongoing ‘Crow Investigations’ series of novels. Taking the reader on a journey, she has also infused her stories with elements of the paranormal, making them highly evocative narratives to explore.

Douglas Adams: Travelling across the whole of time and space, Douglas Adams is perhaps one of the most widely regarded British authors of his generation. Creating an impressive body of work during his lifetime, he was known for his sense-of-humour and intelligence, dealing with big ideas and concepts along the way. Adapted for the screen both big and small, along with memorable radio plays and video-games, he’s now become an institution in his own right.

Q&A – Jodi Taylor: Briefly Taylor answers reader’s questions on her own channel. It’s a direct interview that looks at her own writing process.

The Gin Book Club – Jodi Taylor: This is another basic and to-the-point interview. Talking to the camera, Taylor gives plenty of insight into who she is as a writer.