Karen Kingsbury is an American author best known for writing Christian fiction and her Baxter Family series is one of the most beloved in the genre. Her books have won awards and she has sold more than twenty-five million copies of her books.

Kingsbury made her debut as a fiction writer in 1998 when she wrote Where Yesterday Lives. She had previously published non-fiction true crime books, but this was her beginning in fiction and lead her to a long career in writing.

Kingsbury was born in Fairfax, Virginia as the oldest of five children. She was the first born to Anne and Ted Kingsbury and discovered books at a young age when her father would read Dr. Seuss‘ The Grinch Who Stole Christmas to her. Her father read her the book so many times that she eventually memorized the book by the age of five.

Her father had a job as a computer programmer with IBM that caused her to move around a lot as a child. As we so often see, this drew her closer to books and reading as she never made lasting friendships at a young age. It was all about reading and books as they could travel with her wherever she went. Eventually their family settled in California and she was able to grow up in Southern California. She was a true valley girl, growing up in the San Fernando Valley and lived near the beach. Throughout this time, she had dreams of eventually becoming a novelist.

A more practical thought took over though and she studied journalism throughout high school. By the time she got to college, that thought had faded somewhat. She decided as a freshman at Pierce College that she would become a lawyer. However, she took an English class where the Professor told her that she would “never ever stop writing” and put her on the school’s newspaper staff. From that moment on, writing once again became the goal.

She graduated with her degree in journalism and immediately put it to work. She started as a sports writer for the Los Angeles Times and began to work her way up.

Around this time, she met a man named Bob who would one day become her husband. Bob had an intense passion to live his life for Jesus Christ. At first, the two argued over the Bible and its teaching, but soon it drew them closer together. She eventually became rather religious herself and the two ended up getting married.

She continued to work in journalism and one day sold a story to People Magazine about a murder story that happened in her area. The story ran and she was contacted by a literary agent to write a book on the story. The agent went to work and got her book proposal into a bidding war that saw her first check surpass what she had been making in a year before that. From that day forward, writing would be her focus and her passion.

After four true crime books, she made the decision to switch to writing Christian fiction that fit with her belief system. It took her some time, but she continued to work and eventually Where Yesterday Lives was published and she has had a long and successful career since.

Her success as an author has lead to many of her books being optioned to be made into film and her Baxter Family series getting developed into a television series. 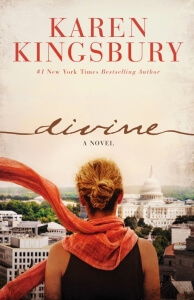 The theme of tragedy and redemption is something that you will see time and time again in the work of Karen Kingsbury and why that type of story is a strength for her is on full display here.

The book introduces to Mary Madison who as a child saw some unspeakable horrors. As a young woman, society did their best to forget her. Her experiences really hurt her and created a life for her that was defined by paralyzing fear, faithlessness, addiction, and promiscuity. She is nearly lost, but a divine power set hers free and allows her to bring life-changing hope and love to battered and abused women.

Mary was a at a true crossroads of her life and there was only one thing that could set her free: a divine power and she will use that same power to save others just like her. 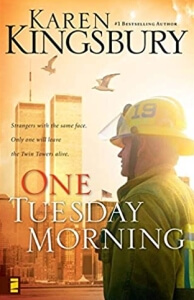 This is the beginning of a powerful series by Kingsbury that focuses on the fateful day of September 11th, 2001. The stories are tragic, compelling, and meaningful as they take you into the hearts and minds of what it might have been like for people on that awful day.

This first book in the series tells the story of Jake Bryan, a firefighter and first responder. He heads to the World Trade Center that day and heads with his fellow firemen to help. The building ends up collapsing on top of him and he wakes up in a hospital bed with no memory of what has happened to him.

Jake’s wife Jamie is right by his side through all of this and she will do anything to help him get his memories back so that he can return to their family. Jamie knows the only way to do this is by helping Jake rediscover his deep faith in God, something she never had until this moment. 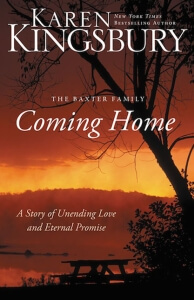 One of the most popular books in the Baxter Family series is Coming Home. The book, like so many of Kingsbury’s greatest hits, is a story of faith and the forever love of a family.

The Baxters are planning a big family get together for the summer. A lakeside reunion that will be a celebration like they haven’t had in a long time. Right before the event is about to take place, the unthinkable happens and the family is rallying together for a much different reason – grief.

The family gets together and shares memories from the past and pray together. They hope that their memories can help to bring healing and hope to them in this time of need. The time changes all of the them, but it is the power of family love that keeps them together and their faith that gets them through. 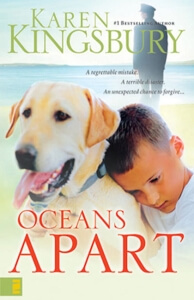 Kingsbury has written more than a hundred novels, but this book pops up time and again on lists of her best books. This powerful story focuses on a marriage on the brink and what the lovers will need to do in order to save it.

Connor Evans is married with two daughters. They are a nice family and his marriage is doing well. They have troubles, but nothing they haven’t been able to get through…until now.

Connor gets a phone call that brings his past coming back to him. Eight years ago, he was unfaithful to his wife Michele and that affair lead to a child that he never knew about. Now that his former mistress has passed away, Connor has a chance to get to know his son while his marriage is on the brink of destruction. Can Michele and their daughters forgive his lying? Or will the appearance of the new family member destroy this family?

This book is Karen’s tale of a lost and broken family and how they are able to escape from their predicament through their faith.

Maggie Stovall is not so much a person, but a character that she has spent years of her life crafting. Her husband Ben loves and supports her as a man of faith, but he has no idea about his wife’s past and what she’s done. Maggie has ideas of leaving it all behind as she deals with a dark depression, but someone has something to say about that.

Amanda Joy is that person and even though she has been abused and thrown away, she maintains her faith and her unwavering belief is what can ultimately get this family through this. If they are willing.

Best Authors To Read If You Like Karen Kingsbury:

Francine Rivers: Rivers is right there besides Kingsbury as one of the greatest living Christian fiction writers. She is a member of Romance Writers of America’s coveted Hall of Fame as well as a recipient of the Lifetime Achievement Award from American Christian Fiction Writers.

One of her most popular books is Redeeming Love. The book takes place in California’s gold rush in 1850. It’s not a great time for people of faith and Angel expects nothing from men as she was sold into prostitution at a young age. She hates the men who use her and the feeling has left her feeling dead inside, until she meets Michael Hosea – a main of faith who wishes to marry her despite her past.

Robin Jones Gunn: Another popular contemporary Christian author is Robin Jones Gunn. She has sold over five million copies of her book and seen a few of her works adapted into Hallmark movies.

One of her most popular series is about her character Christy Miller and the series starts with the book Summer Promise. This story sees a 14-year-old named Christy heading off to spend the summer at her wealthy aunt and uncle’s beach home in Newport. She is spoiled by them, but she is still rather shallow. Until she meets Todd, a born against Christian who hopes to save her.

Don Piper: If you like the inspirational side of Karen Kingsbury’s work, you can’t do much better than Don Piper and his book, 90 Minutes in Heaven: A True Story of Death and Life.

Don died in a car accident in 1989, but he says that he was brought back to life when a preacher prayed over him after 90 minutes in Heaven. His story of the experience is the basis for this world renowned book.

Lori Wick: Kingsbury is known for her touching works and diversity, but even she might not be as diverse of an author as Lori Wick. She writes everything from contemporary books to books set in Victorian England and even pioneer fiction.

One her bestselling books is called The Princess and takes place in the Land of Pendaran. Shelby is a humble woman who lives a good life who is noticed by the king and queen of the House of Markham, who seek a new wife for their widowed son. The two don’t know each other well, but they have one thing in common: their faith and that can help them overcome the barries between them.

Cape Refuge is a Christian mystery by Blackstock that is beloved by her fans. The book sees Thelma and Wayne Owens, who run a bed and breakfast while ministering prisoners just out of nearby jails at an old warehouse, murdered. The couple’s daughters take on the investigation to find out what happened to their parents and hopefully clear the name of Jonathan, one of the daughter’s husband.

Faith Radio: Karen is a guest along with her son Tyler Russell to discuss their series of Baxter Family books that are aimed at a younger audience.

Family Life: Karen is a guest on the Family Life podcast to share some family memories, and reflect on why she considers being a wife and mother to be her finest achievement.

4:13 Podcast: Karen Kingsbury stops by to read a precious poem.