Twentieth-century children’s literature wouldn’t be the same without the efforts of Theodor Seuss ‘Ted’ Geisel, also known as Dr. Seuss by his ever-famous moniker. Both a children’s author and illustrator, his books are colorful, vivid, and immediately recognizable, which also goes for his use of language and word-play. Continually rhyming throughout his books, he’d help children worldwide learn to read, giving them a love of the form, with his inventive and imaginative stories. One of the most creative minds in the field, his work has inspired countless animation and films, with his designs and words living on for generations to come.

The first children’s book to be published by Dr. Seuss was And to Think That I Saw It on Mulberry Street, brought out in 1937. Using autobiographical elements from Geisel’s own life, twenty publishers initially rejected it before it got picked up, meeting warm praise from critics. Before this, he’d bring out a compendium of illustrated anecdotes titled The Pocket Book of Boners, with ‘boner’ referring to a ‘mistake,’ as was the terminology of the time in 1931 upon its release.

His illustrations quickly gained attention, and he made a name for himself as a political cartoonist during World War Two. His politics would also help inform Horton Hears A Who in 1954. Following this, he’d publish several memorable children’s books, including The Cat in the Hat in 1957, and Green Eggs and Ham in 1960.

With his illustrations lending themselves well to animation, his first adaptation would be in 1942. This ten-minute cartoon short would come from his 1940 book Horton Hatches the Egg. Following this, he’d also write the screenplay to 1953s ‘The 5,000 Fingers of Dr. T,’ but, despite being reappraised in recent years as a cult film, this would, unfortunately, be received poorly at the time. Because of this, Geisel turned away from Hollywood.

Later in 1966, animator Chuck Jones would convince him to adapt Seuss’s 1957 book How The Grinch Stole Christmas into the now-famous Christmas TV special. It would also see a live-action remake in 2000 and a computer-animated feature-length in 2018. There would be many other CGI adaptations along the way too. Television shows would also arrive in abundance, along with ‘Seuss Landing’ at the ‘Islands of Adventure’ theme-park in Florida, ensuring that his style and legacy continue to endure. Gaining a lot of acclaim throughout his life, Dr. Seuss has become iconic in the world of children’s literature, with many notable highlights during his literary career.

My own personal top five books from the career of Dr. Seuss are ranked as follows: 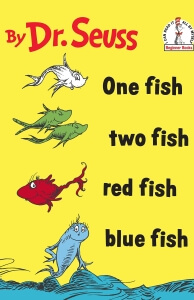 Working a simple rhyming book, this couldn’t be more straight-forward, with its narrative structure that’s easy to follow and accessible to all ages. Featuring a boy and girl named Jay and Kay, they both have plenty of imaginative creatures that are friends and pets. With a loose story, it sees some fun little sketches, all relayed in the traditional rhyming style of Dr. Seuss and featuring his colorful illustrations.

Over the years, this has fed back into popular culture with its bright and lively style, and it’s easy to see why. The little skits are funny and imaginative, with some brilliantly creative surreal imagery that stands out. Not only that, but it promotes the love of reading and language in a simple to follow style that effortlessly flows across the page. 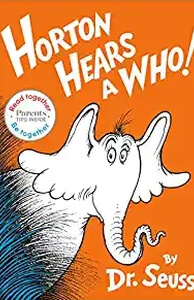 Telling the story of Horton the Elephant, it sees him hearing the voice of a Who, one of the inhabitants of Whoville, which is a tiny planet that exists on a speck of dust. Making sure to take care of this planet and all who reside there, Horton places the dust on a clover, keeping them safe and out of harm’s way. That is until the others in the Jungle of Nool find out and ridicule Horton as they can’t hear it, threatening Whoville in the process, as it faces destruction.

‘A person’s a person, no matter how small’ goes the now-famous refrain, and it all started here, with this classic story of hearing those who otherwise have little voice. Working as an allegory for Japan’s post-war occupation, it served as a timely reminder of the importance of giving a voice to the voiceless. Adapted on several different occasions, this was animated as a television special in 1970 and a feature-length film in 2008. 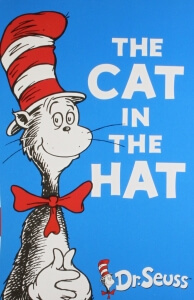 Sally and her brother are left bored at home one day, raining outside, leaving them with nothing to do. That’s when the Cat in the Hat turns up wearing a tall stripey top hat and bow tie, promising them excitement and fun, but their fish attempts to refuse. Unperturbed, the Cat brings out an assortment of gadgets, including his assistants’ Things One and Two, as they unleash all manner of mayhem and mischief on the home.

Written as a reading aide for children around the age of seven, this is such a practical picture book, with its inventive use of language and illustrations. Since his first initial inception, the Cat himself is now an iconic creation, featuring across many different mediums. The book teaches children to read, bringing to life the love of language and words still after all these years, with characters that everyone has come to know and love. 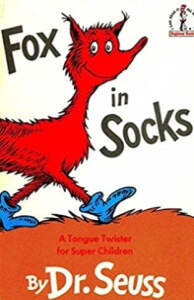 Featuring Fox as the main protagonist, he wears socks while speaking entirely in rhyme. Knox, meanwhile, attempts to keep up with his constant tongue twisters. Fox delights in confusing Knox with his twisting verse, always upbeat. All Knox wants is for Fox to leave him alone and not annoy him with his constant twisters. As the rhyming becomes more and more elaborate, Knox finds himself at his wit’s end in the face of Fox’s hilariously surreal tongue-twisting rhymes.

This combined humor and a bright, vivid story, making for a fun and engaging book that has always grabbed me. Not only that, but much of it remains genuinely funny, especially in regards to Knox’s annoyance at Fox’s ridiculously outlandish and absurd verse. With the rhyming illustrated in surreal detail to Knox’s growing sense of frustration and an increasingly smug Fox, it’s always worked for me. This sense of fun is why the book has become a timeless classic for those learning to read. 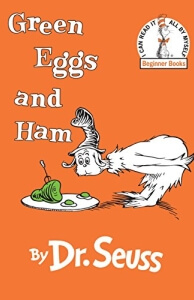 Sam-I-am is one of the main protagonists here, and he wants the other unnamed protagonist to try his dish of green eggs and ham. The food is met with a grimace, though, as the unidentified individual is determined not to taste it, continually running from Sam-I-am as he persists even further. What ensues is an ongoing rhyme that continues throughout the book. Sam-I-am presents several different places that grow increasingly absurd to try the meal. Simultaneously, the other reiterates that he won’t, and both begin to reach an impasse.

For many, this simple premise has become iconic now. It is, essentially, a story for younger readers about trying out new meals. It’s also about not being afraid of different perspectives and gaining a wider outlook on life and the world beyond when they grow up. That’s not forgetting Seuss’s trademark idiosyncratic characters who stand-out, making for some memorable and funny rhyming verse.

Best Authors To Read If You Like Dr. Seuss:

Maurice Sendak: An American illustrator and author of children’s books, much like Dr. Seuss, Maurice Sendak was renowned for his imaginative and vivid storytelling style. Pushing the artistic medium to new heights, he is perhaps best known for his picture book ‘Where the Wild Things Are,’ also adapted as a film. With his unique style, his illustrations would become iconic in their own right and, again, much like Seuss, are immediately identifiable as being his.

Roald Dahl: The British author Roald Dahl is a key figure in children’s literature, writing unique and quirky modern fairy tales that were very much his own. Creating absurdist images through his funny and imaginative descriptions, he has always been able to engage a young generation of readers worldwide. Featuring real characters who would resonate as well, his stories always had a message. They would also get adapted for the big-screen on numerous occasions.

Margaret Wise Brown: Largely looking at animals in a fun and engaging manner, the American author Margaret Wise Brown was a creative writer who wrote in the style children wanted to hear. Looking at the world through their eyes, she resonated with young readers worldwide, writing stories that remain timeless. She’s a gifted storyteller who would work with the illustrator directly, creating stories that fully engaged her young readers on every level.

P.D. Eastman: Like Dr. Seuss in many ways, the two American authors are often compared for their illustration style and humor. Philip Dey Eastman or P.D. Eastman was well known for his funny and engaging children’s books, best seen in ‘Are You My Mother’ written in 1960. Working in animation too, including at Disney and Warner Brothers, this work would influence his style, with his books often reading in the manner of a well-animated cartoon.

Sandra Boynton: A prolific American humorist and author of children’s stories, Sandra Boynton is highly regarded for her funny and engaging picture books. Writing and illustrating numerous greetings cards too, she has produced over four thousand of them over the years, being a name that’s now well recognized the world over. Working in music too, she’s a gifted artist who’s composed with a diverse range of famous musicians, making her one of the most versatile creatives to date.

Stuff You Should Know – Dr. Seuss: Looking at the high and lows of Dr. Seuss as a person himself, this doesn’t shy away from his more difficult aspects. Great for fans of the author looking to find out more, as it pays respect to his life and work.

Bedtime History – Dr. Seuss: This is a brief family-friendly window into the the life of the author. Giving a quick look at Geisel’s life, it describes who he was and what he did.

School Librarians United – Dr. Seuss: Taking a more academic look at the life of Dr Seuss, this examines his work from all angles. Once again, it doesn’t hold back from criticizing some of his life’s darker aspects while still celebrating his work.