Often featuring characters from the grittier side of the tracks, Elmore Leonard has become synonymous with his high-class pulp thrillers. Not afraid of casting a light on the underside of American life, his ear for dialogue is unsurpassed, jumping between an intriguing cast of protagonists, each with their own story. Moving along quickly, his prose is sparse and restrained, but not without humor, making him one of the foremost writers of his generation. Previously dubbed as the ‘Dickens of Detroit,’ he’s a writer that’s very much lauded by his peers, with a lot to say on the seedier side of American life.

His fascination with Americana would begin back in the 1950s, receiving his first big breakthrough in publishing pulp Westerns. As is custom with a lot of pulp fiction, a lot of his work would feature guns, but he never reveled in violence, opting to tell the stories of the individuals behind the triggers. The first short-story he would see published was in 1951 with Trail of the Apaches brought out through the pulp magazine ‘Argosy.’

Following this, he’d go on to publish a further thirty novels throughout the next two decades, making a name for himself in the pulp genre. The first novel he’d release was The Bounty Hunters in 1953, also in the same Western vein. He would move into crime thrillers in 1969 with The Big Bounce, focusing more on dialogue than that of previous American noir writers before him. It would be his gritty sense of realism that set him apart, all while drawing from writers such as Ernest Hemingway for his minimalist prose style.

No stranger to the movies either, a screenwriter himself, Leonard would regularly see his books adapted for the screen, the first of which was his 1953 short-story Three-Ten to Yuma being made into a 1957 film of the same name. Perhaps most notably, though, was his 1992 novel Rum Punch being made into the 1997 film ‘Jackie Brown’ directed by Quentin Tarantino.

Another film was Get Shorty in 1995, adapted from the 1990 book of the same name. His work has also been made into television shows, along with most of his novels becoming audiobooks as well. Winning many awards, including an Edgar in 1984 and a Peabody in 2010 for his work on the 2010 TV series ‘Justified.’ There are many notable career highlights throughout his literary legacy, with several of his books standing out from the rest. 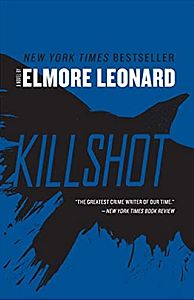 A married couple, Carmen and Wayne, inadvertently foil two criminals’ plans, as they’re run off by Wayne from Carmen’s real-estate office. This leads the criminals to attempt revenge against them both, as the legal system fails to keep them protected, potentially putting the couple in harm’s way. Now facing the vengeful killers, Carmen and Wayne must defend themselves as they attempt to prevent the criminals from taking action.

Mirroring each other’s relationships, Carmen and Wayne’s marriage is contrasted with the relationship between the two criminals. This is something Leonard does really well here, not just telling a compelling story but also creating an interesting character study too. There was a small-scale film of the novel produced in 2009 starring Thomas Jane and Diane Lane, but the novel is the best interpretation of the story here. 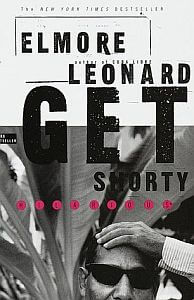 A loan shark connected to the Mob, Chili Palmer is sick and tired of Miami, being fed up with the continual deaths of his friends and associates. Following him chasing a client out to Hollywood, he finds that he would rather stay there instead, preferring the film industry over what he had before. With a great idea for a film, he will do whatever it takes to get made, even if it could quite literally kill him in the process.

There’s plenty of meta-textual elements to the plot here, with Leonard alluding to his own experiences with Hollywood up to that point. An intelligent and incisive novel, it would get made into a film of its own in 1995 starring John Travolta in the lead role, along with a television series being adapted from it later on too. Not only is the story entertaining, but it also provides a lot of insight into the film industry, with well-written characters and sharp, snappy dialogue driving the action. 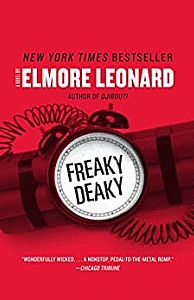 Having served time for their radical activities during the 1960s, two small-time hippie ex-cons team up to extort former activists now turned multi-millionaires out of a sum of money. Using the skills with explosives, they hatch a plan, while a Detective Mankowski, himself a bomb expert and former radical who went on to serve in Vietnam, is on the case. Plenty of hijinks ensue as the story reaches anarchic proportions, with everyone crossing each other, as the ex-hippies hope to turn what was politics into money.

The action itself plays out like a cartoon in many places, complete with sticks of dynamite exploding, and it’s all the more fun for it. A hilarious story with twists and turns on almost every page; it’s a witty crime caper with some incisive and intelligent commentary at the heart of it. It was adapted into a 2012 movie starring Christian Slater and Crispin Glover, but the book remains a funny and accessible read. 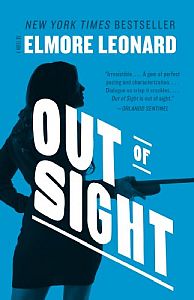 Looking to break out of Florida’s Glades Prison, Jack Foley is a gentleman criminal looking for a score over in Detroit. The only problem is that US Marshal Karen Sisco is hot on his trail, as she vows to track him down and then bring him to justice, but not before the two of them inadvertently share a cramped ride in the boot of a car. With undeniable chemistry between the two, they’re finding it increasingly hard to forget one another, something which they’re going to have to put aside next time their paths cross.

With romance at the heart of this fun action-comedy caper, there’s a lot to love about this entry into Leonard’s literary career. Also made into a well-received film in 1998 directed by Steven Soderbergh, it would also make for an entertaining romantic comedy as well. There’s a lot of fun had with the interplay between the two leads while also making for some compelling action and dialogue. 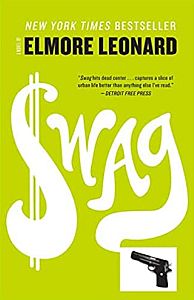 Caught attempting to steal a car from the lot of Frank Ryan, a used-car salesman based in Detroit, Ernest Stickley Jr. feels this could be a turning point for him. Offered the chance by Frank to make some real money, he has a scheme involving guns that’s apparently sure-fire for getting rich quick. Ernest just needs to do as Frank says, and they’re on to a winner, but it appears that Frank doesn’t know as much as he’s making out, and maybe some rules need breaking to get ahead.

There’s a lot of fun back-and-forth between the main characters, making for some of the best dialogue that Elmore Leonard has to offer. It’s both tense and entertaining, with a lot of wit throughout, as it shows Leonard as a writer whose clearly at the top of his game. Everything is well-paced throughout, too, making this the ideal showcase for his talents as a writer and a must for any serious fan of him as an author.

Best Authors To Read If You Like Elmore Leonard:

James Ellroy: Known for his noir brand of crime-fiction, the American writer James Ellroy is a well-established author and essayist. Using a brief minimalistic style to his writing, he’s similar to Elmore Leonard in many ways, as they both employ a straightforward approach. Writing novels such as ‘L.A. Confidential’ and ‘The Black Dhalia,’ his work has been adapted for the big screen, too, making his name synonymous with a fairly bleak but moral outlook.

Raymond Chandler: Seen as one of the leading proponents of the modern detective novel, American writer Raymond Chandler was instrumental in popularizing the form. As well as being an author, he was also a prolific screenwriter, and there would also be famous adaptations of his work, such as the ‘The Big Sleep’ in 1946. With key turns of phrase and witty use of word-play, Chandler really made the form his own, and it’s easy to see how he’s gone on to inspire writers such as Elmore Leonard in the years to follow.

Janet Evanovich: Beginning under the pen-name of Steffie Hall writing romance novels, Janet Evanovich would soon turn to write modern mysteries, which was where she truly excelled. Featuring characters such as bounty hunters similar to Elmore Leonard, she really has an ear for dialogue and how people speak. Not only that, but her narratives are well-paced, too, allowing the reader to easily follow her labyrinthine plots every step of the way.

Robert B. Parker: Largely focusing on the detective and mystery fiction genre, Robert Brown Packer was well known for writing forty engaging novels during his lifetime. Perhaps best known for his ‘Spenser’ character, which would go on to see the ‘Spenser: For Hire’ long-running series of television movies. Much like Elmore Leonard, his name has become synonymous with the genre, as his characters and stories live on.

George Pelecanos: Another American writer of detective fiction, George Pelacanos has clearly stated that Elmore Leonard is his main source of inspiration. Producing work for television too, he would work on the prestigious hit show ‘The Wire,’ with his eye for gritty realism remaining unsurpassed. His work has won many awards, and his books remain at the forefront of the genre, creating numerous series and stand-alone novels with a clear point-of-view.