Ernest Hemingway is an author whose name is synonymous with writing and the art of writing, with his minimalist prose and sparing use of language. Working as a journalist and an author of both novels and short stories, he was an imposing figure, integral to the American literary scene of the early part of the twentieth century.

Subtle and economical in his writing approach, Hemingway was a master of understatement, paying attention to the smaller details while making everything count. Hemingway’s personality would be just as central to his writing as the work itself, as he created many classics throughout his career.

In 1926 Hemingway would publish his first novella The Torrents of Spring, quickly followed up that same year with The Sun Also Rises. The latter would prove to be hugely influential, and later, in 1929, he’d publish A Farewell to Arms, which many would hail as his seminal masterpiece.

Much of this would come to reflect his time spent serving during the First World War, using his experiences to help inspire his writing. The writing itself was sparse and measured, as his style would come to define his brand in the years to follow. Many knew Hemingway for his many letters, essays, journalism, and remarkable short story collections, starting with Three Stories and Ten Poems published in 1923. With a strong presence in his writing, he’d become synonymous with a certain sense of masculinity, something he’d both pay respect to and critique in equal measure.

There are numerous film adaptations of his work. These include ‘A Farewell to Arms’ in 1932, 1943s For Whom The Bell Tolls, through to 2008s The Garden of Eden. There were also several television productions, as his legacy has inspired countless artists and creatives.

In 1954 he would receive the Nobel Prize for Literature. He would spend a lot of time living worldwide, in countries including Cuba, while writing for publications such as the prestigious ‘Life’ magazine. Since then, the ‘Hemingway Society’ has been founded in his name, along with the highly sought after ‘Hemingway Foundation/PEN Award,’ as he left behind a legacy with many notable highlights.

My own personal top five novels from the literary career of Ernest Hemingway run as follows: 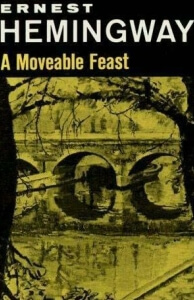 In part, biographical for Hemingway looks back on his time writing during the twenties, living as an unknown author in Paris. Writing in cafes there, he would focus on his art. He also looks back on the lives of various other writers that he’s previously shared Paris with and their respective legacies as artists. Looking back at the city’s romance, this would be written in the final years of Hemingway’s life, as he’d pay homage to and reflect upon his time spent there.

Honest and touching, this intimate piece of writing gets to the heart of who Hemingway was as an author, showing the real power of his words. Enormously beneficial for both lovers of the craft of writing and Hemingway in general, it shows what can be done with the English language, clearly displaying its full potential. The story captures a time that has now long gone, keeping it immortalized upon the page while transporting the reader back. Allowing the audience some idea of what it was actually like, the past remains intact here. 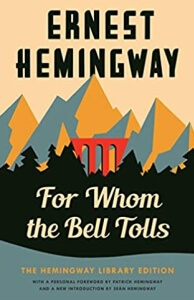 In 1937, Ernest Hemingway documented his time spent in Spain during the civil war, covering the antifascist effort for the ‘North American Newspaper Alliance.’ Using this as the background, he tells the story of Robert Jordan, an American seen taking up arms in the cause of fighting against the fascists, as he serves for the International Brigade there. Through Jordan’s story and his falling in love with Maria, we see the birth and death of ideals as he fights for them, staying true to the cause.

This book is a powerful novel that touches on some intimate issues, looking at people’s nature and their ideals held in the face of adversity. Remaining just as honest today as it ever was, this made an impact on its initial release and continues to do so, showcasing some of Hemingway’s best writing. It may not be his best, but it’s a memorable classic that’s up there, as Hemingway never fails to deliver, in what is an engaging and compelling read. 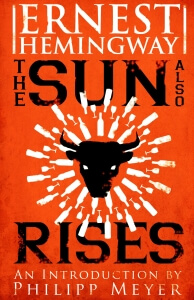 Set in the aftermath of the First World War, Jake Barnes and Lady Brett Ashley move from Paris to Spain. Surrounded by the 1920s, it sees the two expatriates journey from Paris’s wild nightlife into the fierce Spanish bullfighting arena. Meeting fellow expatriates, Jake and his cohorts discover the ring’s brutality as they attempt to find themselves amidst the times’ disillusionment.

One of the classics of the era, this title helped define Hemingway as the writer he came to be seen as in the following years. Some of the ideas may be a little dated now. The positive view of bullfighting has waned for many, but, overlooking this, it still holds many other good attributes that are admirable. Employing his signature sparse language and measured writing style, the book evokes a feeling of the time readers can easily relate to today. 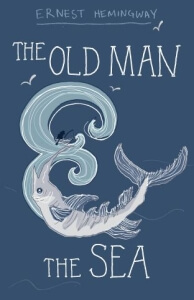 Having gone for eighty-four days without catching a single fish, Santiago is an otherwise experienced Cuban fisherman. Lately, though, he’s been facing a spell of bad luck. That’s when he ventures out into the Straits of Florida, where he manages to get a bite from a large Marlin fish there, which suddenly starts to pull. Facing off against his adversary now, he begins to form a bond with the fish, gaining newfound respect for it as he gets dragged along for days.

This story works on multiple levels as a fable, being a symbolic tale with heavy underlying meaning. Containing Hemingway’s signature straight-forward direct style of prose, he immediately targets his message with expert precision. Despite this, it’s also open to interpretation, with plenty of more profound ideas running through the heart of it, managing to convey what it wants to say clearly and articulately. 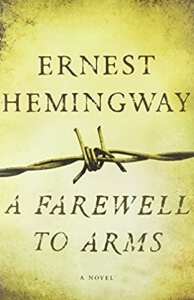 Set during the First World War, this follows an American ambulance driver and his time spent in Italy on the front line. Consumed with a burning passion for a beautiful English nurse there, Lieutenant Frederic Henry must navigate the horrors of the battlefield while working as a paramedic. Throughout the novel, they must contend with the war around them, struggling between loyalty and desertion.

Based upon Hemingway’s own time spent serving in the US Army as a paramedic during World War I, depicting everything he saw and witnessed there. The story itself is a classic tale, never shying away from the horrors of war but also featuring a strong romance at the heart of it. Some may feel elements of this are now dated. However, I feel it still definitely holds up as one of his best. The language used is extremely succinct and intelligently used, making precisely the point he intends to make.

Best Authors To Read If You Like Ernest Hemingway:

John Steinbeck: The American author John Steinbeck won a Nobel for literature during his lifetime, as he’d write in a powerful and demanding manner. Direct and straight-to-the-point, he always made sure to make everything count, never wasting a single word, as he portrayed the downbeat and the every-man. Coming out of Depression Era America, many of his novels would reflect this time, perhaps most notably with ‘The Grapes of Wrath,’ which has gone down in history as a classic.

Raymond Carver: Writing short stories, Raymond Carver was a hugely influential American writer, creating many plays and screenplays. Largely focusing on a gritty sense of realism, his work was grounded in everyday details, looking at life as it is. A lot of his work has gotten adapted for the stage and screen. One notable film is Robert Altman’s ‘Short Cuts’ in 1993, which brought together nine shorter stories.

Martha Gellhorn: Married to Ernest Hemingway for five years, Martha Gellhorn was an artist and an American author. Working as a travel writer and as a journalist, she would enjoy a sixty-year career, contributing enormously to the field of journalism during her lifetime. With an award for journalism named in her honor, she’s left a legacy quite unlike any other and is a writer to investigate further for anyone who appreciates Hemingway.

F. Scott Fitzgerald: For many aware of Hemingway’s life and friendships, this one seems obvious, being that he and Francis Scott Key Fitzgerald shared a mutual respect. Often this would emerge in the form of rivalry before moving back to friendship, as they were two authors at the forefront of the American literary scene during the 1920s. The influence of each of their insights on one another’s work is more than evident, making Fitzgerald a definite must for any fans of Hemingway and the period he wrote within.

Jhumpa Lahiri: A contemporary writer who, much like Hemingway, is known for her sparse language use, Jhumpa Lahiri is a widely renowned American author. Making each word count every step of the way, she’s known for her short stories and her award-winning novels. Winning the Pulitzer and the Hemingway Award, she’s gained a lot of recognition over the years while also working in writing for television.

Great Lives – Ernest Hemingway: Looking at the life and work of Ernest Hemingway for the BBC Radio 4 series ‘Great Lives’, Michael Palin examines what was so powerful about his writing. Providing a window into the past, he gets to the heart of what drove Hemingway as an author.

The History of Literature – Ernest Hemingway: Studying his style of prose and his place in modern literature, this looks at the profound effect that the work of Hemingway has had. Offering a large amount of insight into who he was, this lays bare what his writing meant.

Historical Figures Famous Fates – Ernest Hemingway: This looks at the man behind the writing, and some of the tragedies that befell him. Not holding back, this show tackles many of the hardships of his life.