Dan Brown is one of the most successful authors of all-time with his series of Robert Langdon thriller novels.

Even if you’ve never read The DaVinci Code or seen the movie, you know what it is and have at least heard of it. The book is that present in the culture and apart of the greater pop culture. His books with Robert Langdon are deeply engaged with Christian themes and historical fact, drawing controversy along the way. However, that was never Brown’s goal as he simply wanted to use his stories to promote spiritual discussion and debate.

Brown is best known for the Robert Langdon series, but he has also written books outside of that series. His first novel was Digitial Fortess released in 1998. The book features a plot about electronic government surveillance on the private lives of citizens and gets into the world of cryptography, a subject that is clearly dear to Brown.

The DaVinci Code was Brown’s fourth novel and was the one that had the huge crossover appeal with the movie directed by Ron Howard and starring Tom Hanks being made from it. That movie was a major hit, grossing a total of $760 million worldwide. The movie spawned two sequels as Angels & Demons and Inferno were also adapted for the screen.

Brown writes a unique kind of thriller. There are a lot of “If you like Dan Brown” type articles out there that simply list other thrillers. The Gabriel Allon series by Daniel Silva and the Culper Ring series by Brad Meltzer are two series that I see popping up on these lists time and time again. And I agree! Those books are similar to this, but if you are seeing that on lists all over then you are likely to have already read them. They are probably right next to each other at the library.

I take my book recommendations very seriously and I am looking for books that not only fit for fans of Dan Brown, but also are ones that aren’t completely obvious. I hope I did a good job with it, let’s see how I did. 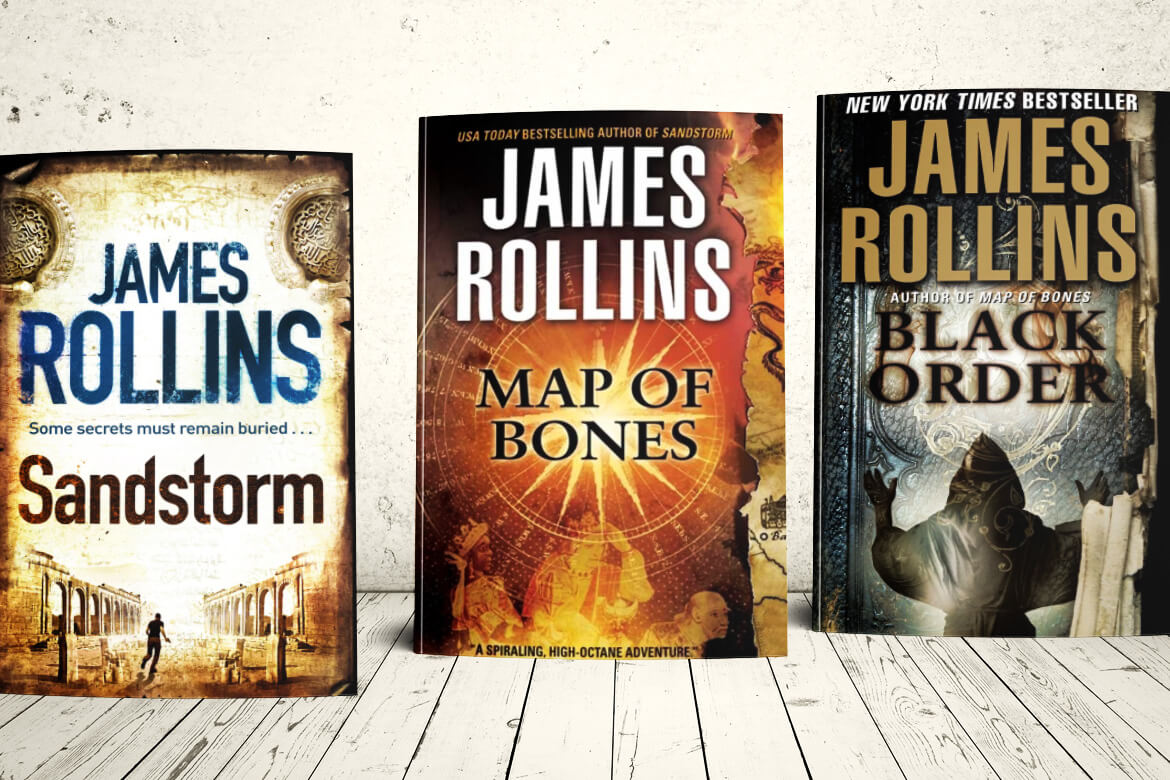 Look, I can’t do this list without James Rollins. I tried, but I just can’t. Some people have called Rollins “Dan Brown 2.0” and that’s hard to argue with. If you like Dan Brown books and you haven’t read any of James Rollins’, you are doing yourself a disservice.

The story of Sandstorm, the first book in the Sigma Force series, starts with a freak explosion in the British museum in London that leads to the discovery, and race for, an earth-shaking power source.

Sigma Force, a covert unit of the Defense Department, is on the case. Painter Crowe is one of their agents who is tasked with keeping dangerous scientific discoveries out of enemy hands. An artifact is discovered that seemingly points the way to the legendary “Atlantis of the Sands,” and Painter must go out in search of the lost city that hosts this destructive power before anyone else gets there first. 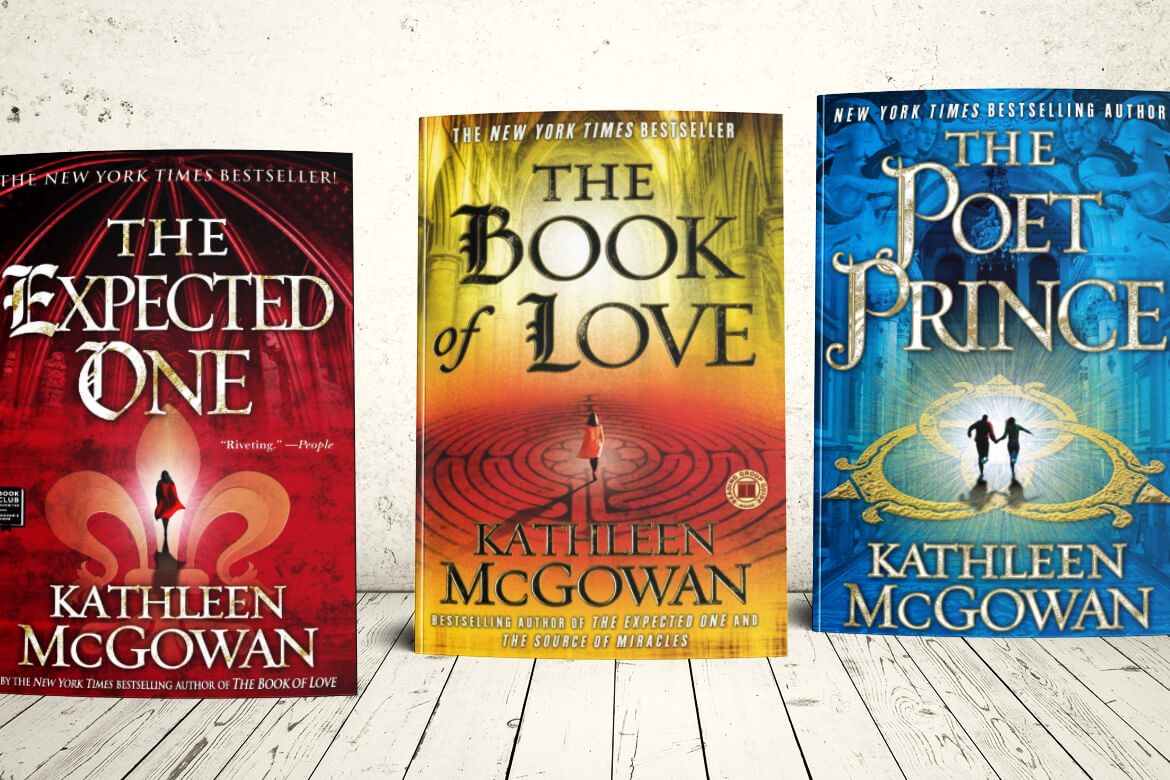 Maureen Paschal is a journalist researching a new book in The Expected One, but she has no idea that her research is putting her on the path of an ancient mystery that thousands have killed and died for. The mystery surrounds the ancient scrolls of Mary Magdalene who hid them two thousand years ago. The scrolls are said to contain her version of the events of the New Testament and they are protected by supernatural forces that are waiting for The Expected One to uncover them.

The prophecy of The Expected One soon casts a shadow over Maureen’s life as she becomes deeply immersed in the mystical cultures of southwest France. The prophecy itself turns out to have a connection to her when a long-buried family secret comes to light. The story is all leading to Maureen, and us readers, coming face-to-face with Mary’s story of the life of Jesus.

This series reminds me a lot of the Dan Brown books simply because of the spiritual journey that it sends its main character on. It’s also a real page-turner and a ton of fun! 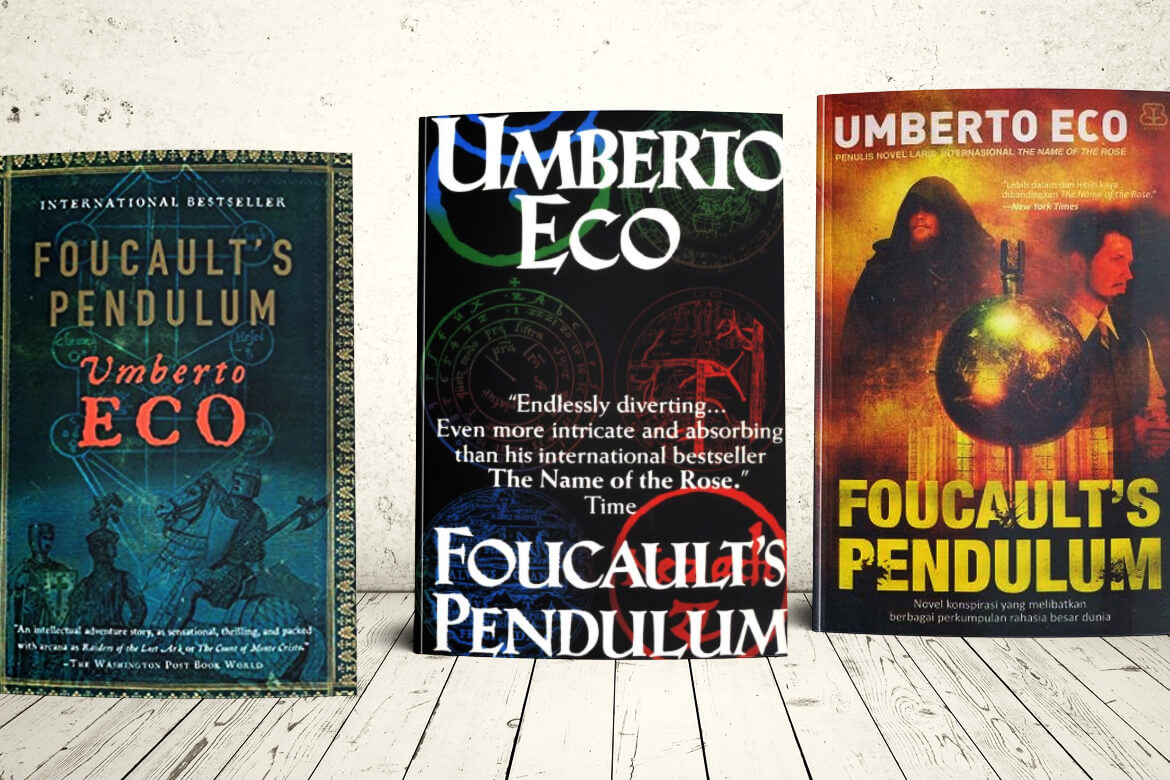 (This one is for an individual book not a series)

When I think about what I like about Dan Brown books I know what it is that I like about them, but I have trouble putting it into exact words. When I was putting together this list I read a review of Foucault’s Pendulum that put my thoughts into an exact phrase. That phrase is “endlessly diverting” and, oh my god, if that doesn’t explain exactly what I like reading a good thriller!

Foucault’s Pendulum starts with three Milanese book editors who are bored at work and decide to cook up an elaborate hoax. Their hoax connects the medieval Knights Templar with occult groups across the centuries. It’s a bit of fun, but they soon become obsessed with their own creation and go so far as to produce a map that tells where each of the powers of the earth can be controlled. Specifically, a point located in Paris, France, at Foucault’s Pendulum. What could go wrong?

As it turns out, a lot could go wrong. Numerous occult groups including Satanists get wind of the Plan and will do whatever it takes to gain control of the planet, including killing one of the editors.

As much as I love Dan Brown, this book is the absolute definition of endlessly diverting as it takes you places that you really never plan on going. To quote my dad’s favorite wrestler: just when you think you know the answers, it changes the questions!

The Eight series by Katherine Neville 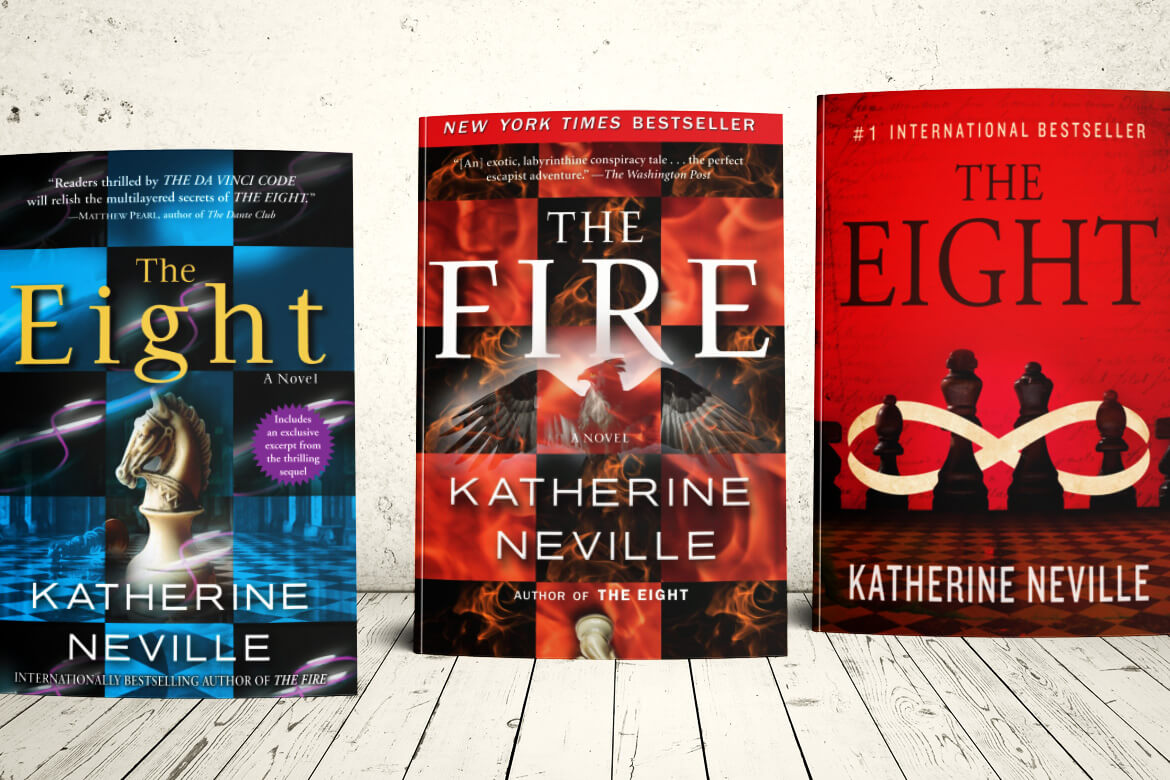 The Eight is a book by Katherine Neville that takes place in the 1790s and the 1970s. The series surrounds a fabulous, bejeweled chess set that once belonged to Charlemagne that was buried in a Pyrenees abbey for a thousand years until some nuns dug it up during the French Revolution. The nuns feared that in the wrong hands that it could topple civilizations so they sent two novices to spread the pieces around the globe.

In the 1970s, computer expert Catherine Velis is on assignment in Algeria when she finds herself drawn into the deadly “Game” that now surrounds the legendary chess set. She studies the code which involves everything from musical notation, to chess strategy, to the Fibonacci numbers, and mysticism. The “Game” and her studies will force her to risk her life as she matches wits with diabolical forces all around her.

Neville somehow manages to take some great historical facts and surround them with imagination and legendary characters to create an outstanding story that will leave you ready for the film adaptation. 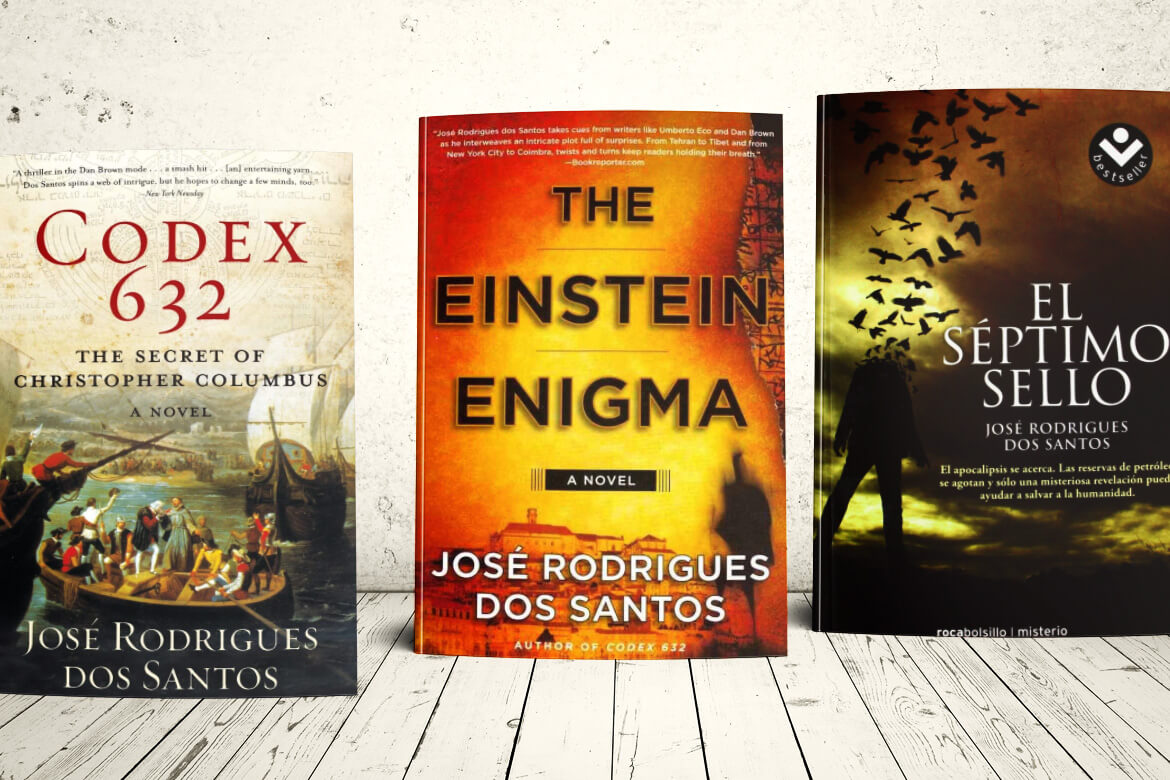 A great series but my personal favourite is The Einstein Enigma. I’ve seen this book described as “The DaVinci Code in reverse” and that is an apt description of the novel. The book follows a world-famous cryptanalyst as he searches for scientific proof of God’s existence with a formula developed by Albert Einstein.

The Einstein Enigma begins in 1951 when the famous scientist Albert Einstein and Israeli prime minister David Ben-Gurion enter Einstein’s home to speak privately about nuclear weapons and the existence of God as a CIA operative watches them from the shadow. Now, in present day Cairo, world-famous cryptanalyst Thomas Noronha is hired to decipher a secret document that was allegedly written by Albert Einstein, titled Die Gottesformel: The God Formula.

This book not only gets your mind racing with the thriller aspects, but also with some of the ideas presented by the author. At the very least, this one will make you think.

Get this amazing novel at Amazon - click here
2
FacebookTwitterPinterestEmail